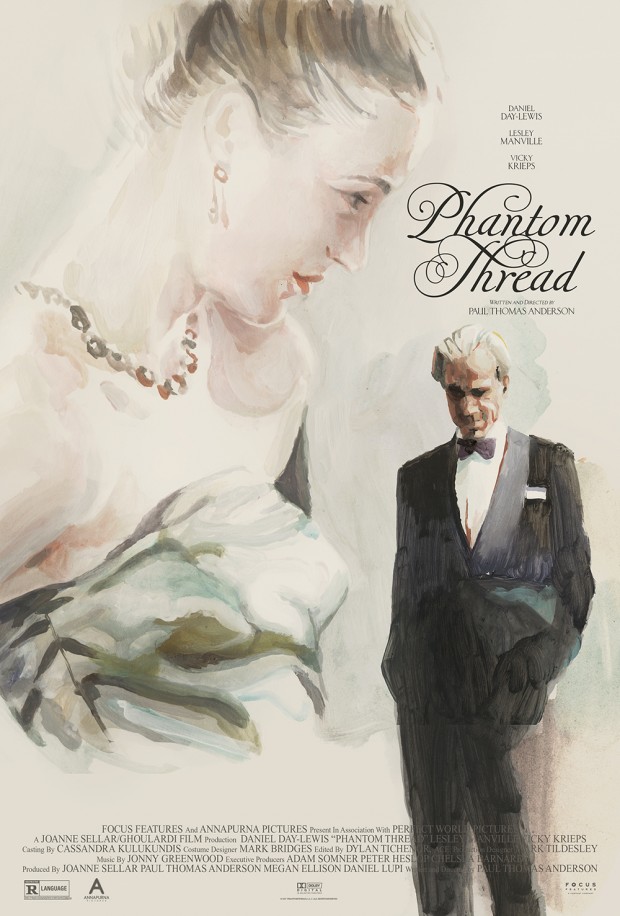 With Phantom Thread we have a movie set in England in the boring 50’s. This is a film about a dressmaker, a very good dressmaker. Reynolds Woodcock was more than just a designer of womens’ dresses. He was a genius, a high level artist, and one who was so good that all sorts of born-rich fools, queens, princesses, duchesses, and the occasional unworthy flocked to his fashionable home/shop for his unique and beautiful creations.

Unknown to most, a part of himself went with every garment he sent out the door. Like most geniuses, Woodcock had issues, many issues. And not the least of which were Mommy issues. His genius, these issues, and how they interacted with and impacted another key character was the very essence of this gorgeous film. 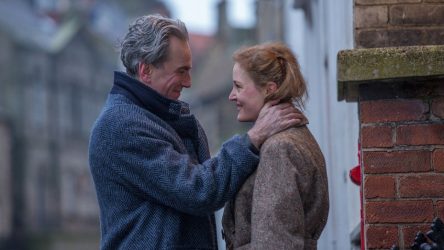 Paul Thomas Anderson (Boogie Nights, There Will Be Blood, The Master, Magnolia) elicits formidable expectations, but with Daniel Day Lewis in tow, you know a great film is at hand. Not only do you have Lewis in top form, but you have another couple of actresses that create a tour de force of acting excellence. Reynolds Woodcock was the master, the artist, the design creator who was meticulously regimented to the point of absurdity.

Goat help anyone who sent even a tiny wave of discordance into his tightly followed obsessive-compulsive routine. Iron-willed, inflexible, superficially unreachable and unlikable, Reynolds Woodcock also revealed a surprisingly needy vulnerability. As usual, Daniel Day Lewis totally absorbed his character. He was a narcissist and a card-carrying perfectionist. He loved himself and his work even more, and when he told Alma that she “looked beautiful” he really meant that his dress was beautiful. Even when he was not speaking, Daniel Day Lewis was projecting a powerful message. If this is indeed his final work in a movie, he will go out with a dazzling and unforgettable performance.

Cyril, played by Leslie Manville, was his sister, but also totally orchestrated the matters of the house. This included managing the squad of highly-skilled matronly ladies that constructed his masterpieces, Not only did she manage the shop, she also managed her brother and anyone else who was lucky (or unlucky) enough to enter his life. To say that Cyril was not to be trifled with was a vast understatement.

Cyril was right, always right and this was decreed by the great Woodcock himself in one of the numerous powerful scenes involving the trio. Woodcock was a powerhouse and the master of the domain, but Cyril said it best when she retorted acerbically to Woodcock when he told her to shut up. “Don’t pick a fight with me, you certainly won’t come out alive…I’ll go right through you”. Reynolds Woodcock did not utter another word. Leslie Manville is certainly on course for a Best Supporting Oscar for her performance. 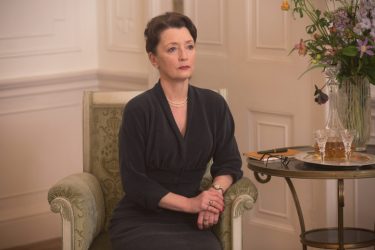 Cyril was a force, but when Woodcock was smitten by a mousy waitress in the English countryside, another iron-willed woman came into play. Reynolds had gone on holiday in the country while Cyril was left to do the dirty work of dispatching the current lady friend, who had committed an unpardonable sin. She could have been buttering her toast too loudly while The Master was reflecting on his daily routine at the breakfast table. She actually only offered him some pastries that were not on the “approved list”, but the damage was done. Woodcock permitted no variance in his breakfast routine. It would ruin the rest of his day.

His new lady, Alma, played brilliantly by a relatively unknown Vicky Krieps, was immediately assimilated into Woodcock’s personal and professional life. First as only a trophy mannequin in his universe, Alma eventually morphed into an unimaginable authority. “I live here” she confidently told the Countess, in her face, making sure that even the most powerful of clients knew her position in the Townhouse. A stoic risk taker, Alma was not one to be denied by anyone, and that included Cyril, but especially his Highness himself. 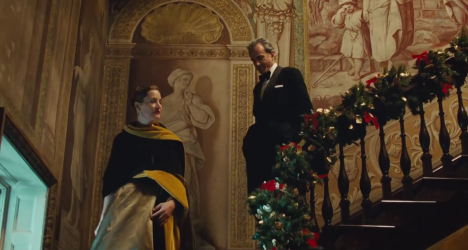 Phantom Thread was a delicately layered masterpiece, and also a unique love story. The film is subtle and slow-paced, but not once did my eyes stray from the screen. The cinematography was done by Anderson himself and it was magnificent. Not only was the acting splendid, but the other aspects of the film equally neared perfection. The costume design will undoubtedly be in contention for an Oscar. What really stood out was the way the mesmerizing musical score perfectly complemented the seamless flow of the participants in the Woodcock townhouse. Every scene was a ballet of pulchritude, especially the needle-workers at their craft, and everyone traipsing up and down those spiral steps.

I have heaped platitudes of praise upon this film, but what about the story? This film is a must see for any fan of cinema. To delve deeply into the story would involve major spoilers. I’m still amazed that a movie about a dressmaker in England could be so engaging. Paul Thomas Anderson stitched together a 3-way battle of wills that was hypnotizing. Alma more than rose to the challenge of the chess match with a recusant Woodcock, with unexpected results.

Many viewers and reviewers did not like the plot twist that blindsided us. Nor the ending that revealed the terrible secret. Phantom Thread was painfully beautiful, classy and darkly suspenseful. It is a highly recommended film.

10.0/10.0 With the Goatesian Seal of Approval for Excellence