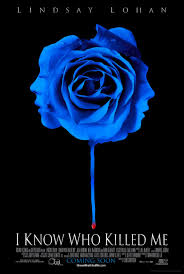 A woman who is missing reappears, unfortunately for anyone who watched this film

It’s about time you resurrect the Shithouse. Whats this one about?

Lindsay Lohan, playing both Aubrey and Dakota, is kidnapped, gagged, tortured, and mutilated, losing a hand and leg in the process. Shes found, sent to a hospital, then followed by the FBI, and before long, shes in a graveyard digging up herself.

Wait a minute, here. How’d we end up in a graveyard? Why is she two people?

Aubrey is a good girl. A sweet pea. And she has the trophies and ribbons to prove it. She loves the piano, has ambitions to be an author, and has so many friends she cant have a moments peace. She also has a devoted boyfriend who wants to fuck her like nobody’s business. Only she wont have it, as she has to be in love to get physical. So its practically Lohan’s memoir. Dakota, on the other hand, is Aubrey, only she isn’t, because she claims to be a two-bit stripper who’s been on her own ever since she found her mother stone dead with $11 tucked within her rigor mortis grip. Dakota swears like a sailor, fucks on command, and stabs people in the neck, but Ill be damned if she shows her tits while spilling her sweat during a pole dance. Shes no whore, this one.

Back up, dude. Aren’t two Lindsays’ better than one?

As much as I wanted this to be The Double Life of Veronique, I couldn’t imagine Krzysztof Kieslowski resorting to owl hallucinations, homicidal piano teachers, and creepy lairs dressed up with legs hanging from the ceiling. I kept thinking that Aubrey was making this shit up for a novel, or that the film was her novel, or something rote and uninspiring like a dream, but instead, the film went off the rails completely by having the two girls be twins separated at birth, with a dad who sold one of them to a crack whore a few rooms down. Or something. I think they explained it while I was fixing popcorn.

Yeah, but wasn’t there a lot of symbolism? You know, about dichotomies and the nature of the self?

In spots, yes, but on the whole, the movie kept pounding home the notion that the color blue meant something. In all, there were blue rings, blue shirts, blue jerseys, blue gloves, blue gags, blue flowers, and even blue instruments of torture. Was blue the innocent half of Aubrey? I started to think so, that is until the blue metaphor stuck around even after she was locked away somewhere. The color suddenly switched to red when Dakota first came on the scene (she wore a red shirt when she found her dead mom in a flashback), but everyone around her kept wearing blue articles of clothing. Sure, that one weird guy on the bus came to Dakota in a dream and said, Two halves to everything, while flashing a tattoo about love and hate, peace and war. And wasn’t Aubrey buried in a blue coffin, even though she was alive at the end? With stories like this, why lament a writers strike?

As Dakota found it on Wikipedia, we have to accept it at face value. In a short clip found therein, we hear about stigmatic twins, which feel pain at exactly the same time,and even suffer from similar wounds, despite being thousands of miles apart. So when Aubrey was kidnapped by the serial killer and her finger cut off, Dakota suddenly lost her own finger while preparing to hit the strip club stage. Bleeding, she fell to the ground, only to be dismissed as a heroin overdosing ho by a fellow stripper. Convinced as never before (though I think this was a flashback), Dakota accuses Aubrey’s father though technically her own of hatching this scheme to ensure a healthy baby. Why not keep both? Have you ever known a well-adjusted set of twins? Besides Jenna and Barbara.

Okay, so Lohan’s no actress. Does she at least show that famous rack?

Not as a stripper, not as a dead body, and not even as an evil twin who fucks the good girls boyfriend while posing as Aubrey. The sex scene is pretty good as these things go, though we only see her from the back. And its played for laughs, too, as Aubrey’s mom, not knowing its actually Dakota, is forced to listen to the moans and groans of passion as she scrubs the sink downstairs. Her tits are nearly exposed in another scene, this one alluding to the discovery of the horses head in The Godfather. With a full zoom on Lohan’s tight-as-shit skimpy top, she frantically shoves away the bloody covers to reveal two bloody stumps for legs. Its a dream sequence for no other reason than to further aggravate everyone who hadn’t yet thrown the DVD into traffic. Lohan is a junkie whore who won’t likely see the next presidential election, but there’s no escaping her criminally underused breasts. If only there was a way to see them sliced, detached, and lifted from the rest of her body without seeming sick and perverted.

As melodramatic as the performances were, there was precious little to rub the funny bone. Expository dialogue often defines a movie like this, and as such, curtails the overwrought juices. About the best there was featured Dakota before a mirror, offering the following monologue: I am Aubrey Fleming. My name is Aubrey Fleming. I enjoy sunsets, long walks on the beach, and playing the piano. I have never been inside a strip club or a crack house, and I have never sold my body to hairy old men with B.O. because I am perfect. Sing it, sister.

Fine, that gay dude on the bus did say, People get cut. That’s life. Who knew they’d steal my mother’s soothing words after my stint at Pee Wee football?

I know Dakota had a nub for most of the film, but what the shit was that with Robocops hand?

She had it attached to her stump during rehab, but it suddenly became flesh-colored and life-like. And yes, she does cause a man to flinch during a handshake. Tee-hee.

Okay, so besides the blood dripping down stripper poles, Lohans Ferengi teeth, and square-jawed psychobabble, what on earth was this thing trying to say?

Oh, you mean the identity of the serial killer? Remember him? Turns out, its the piano teacher we see in Aubrey’s opening scene. You know, the one where she tells him that shes through with the instrument and will not be available for the big competition. So without any additional information or clear motive, we are forced to conclude that this snub led a professional musician to flip his lid, collect legs, and slice open young women with a surgeons precision? Dakota gets revenge, though, as she cuts off his hand (we know its his, because there’s that oversized blue ring on one of the fingers), sets it in a bucket of ice, and follows with a glass blade to the carotid artery. And then a sprint to the cemetery for a quick dig, only to pass out with her long-lost sister as a stream quietly trickles by.

Is life worth living?