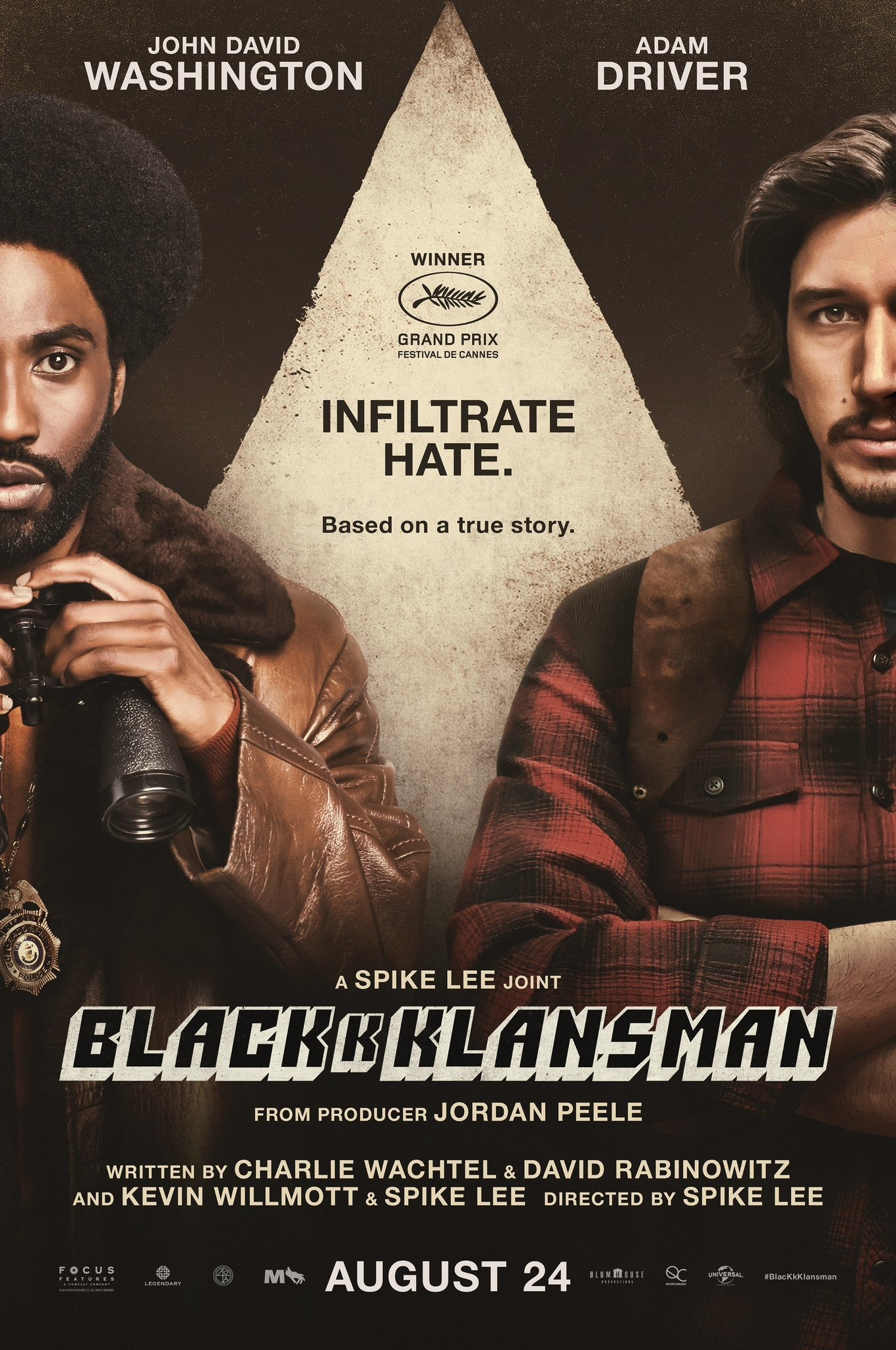 Fair Value of BlacKkKlansman (2018): $12.00. Its the first film I’ve seen this summer worthy of a Best Picture nomination.

Invisible Empire: Racism is the central ideology of the American Empire. I know you’re going to throw democracy and liberty in my face- but that’s always just been the advertising blurb on the sales brochure. J. H. Elliott’s Empire of the Atlantic: Britain and Spain in America details the singular distinction of the British colonial effort: that they forbid inter-racial marriage, and denied opportunities to mestizos and mulattoes. Even when it would have saved them decades of wars and labor shortages, the men of Virginia and Plymouth stuck to their purity.

Over time, this evolved into racism, an artificial distinction used to establish a caste system and to justify the expansion and continuation of slavery. As demographics shifted, racism could be reworked to be more inclusive- including Germans and Swedes at first, then later even going to the Irish, Italians, and Slavs, and even, at brief moments, to Latinos. But the beauty of racism, as a tenet to authoritarian regimes, is that it could also be rescinded. For an example, look at the persecution of the Okies- Oklahoman and mid-Western refugees in the 1930s. Racism exists to benefit the privileged few by creating classes of humans that are suffered only for exploitation.

And that brings us to the Ku Klux Klan. Americas most persistent and murderous terrorist organization. Across the decades, the KKK has killed thousands more Americans than ISIS, Al Queda, and anarchists combined. It has massacred entire villages, blown apart schools full of children, murdered senators and judges.

Yet to the minds of the 21st century, they may seem like clowns- witless hicks in pointy hoods. The privileged do not understand the reign of terror that pervaded across the nation during the Klan’s heyday.

Undercover Brother: Spike Lees latest joint focuses on the efforts of Ron Stallworth (John David Washington), the first black member of the Colorado Springs police force. His chief (Robert Burke) is only passive-aggressively supportive of Stallworth, telling him I have your back, but the work is up to you.. Eager to be more than a records clerk, Ron springs for a CO-INTEL-PRO infiltration of a Kwame Ture speech to the Colorado State black student union. Hoping to score a better operation, Ron then does the unthinkable. He responds to an advertisement posted by the KKK, calling them to ask for materials.

Fom there the film goes into the realm of the undercover genre, like Donnie Brasco. Detective Flip Zimmerman (Adam Driver) has to act as Rons proxy for in person meetings, drinking beers and meeting with the Colorado Springs Klan. They vary from the ambitious leader (Ryan Eggold), the mouth breathing idiot (Paul Hauser), and the ticking time bomb (Jasper Paakonnen). Flip is in peril, both as a policeman and as a Jew- as Ron says to Flip, Don’t act like you don’t have skin in the game..

Do You Know Your History? This question, mirrored by both Klansmen and Black Power activists, is the core theme of the film. But the difference lays in the contrast between the mythical history of D.W. Griffiths Birth of a Nation and a riveting account of the lynching of Jesse Washington by Jerome Turner (Harry Belafonte). One is an artificial Hollywood pageantry; the other, the disquieting and hidden atrocities that percolated all over the south.

If Religion is the Opiate of the Masses, then Bigotry is the PCP of the masses: Its an emerging adage that if you’re proud of your skin color, that suggest that you lack any other basis for your pride. The poisoned heart of the film is Felix Kendrickson (Jasper Paakonnen) and his wife Connie (Ashlie Atkinson). Hes pure paranoia, a man constantly looking for the opportunity to do violence, and hes enabled and encouraged by his wifes bigotry- for this couple, planting bombs on porches is couples therapy.

The Tides of Hate: As a younger man, I once was of the belief that the neo-nazis were the final pus from a lanced boil, that racism was an ebbing force soon to relic to history. But we elected the son of a Klansman to the White House, and the Proud Boys now march and riot from Charlottesville to Portland. It is thus appropriate that Spike Lee begins the film with a scene from Gone With the Wind of the Confederate casualties at the Atlanta train depot, and ends with searing live footage from the Charlottesville riot.

White supremacy is the hydra, a perpetually regenerating and recurrent curse upon the American nation. It does not matter how provably false its pablum is; nor how terrible the cruelties, nor how mendacious the adherents are. I expect to still see the bigots marching when I am an old man. As Spike Lee, and I, and any person with a grasp of history understands, racism is the perennial, the tainted respiration of our society. Chase it to the darkness, revile it, renounce it, persecute it, prank it, hold it to the sunlight; the hate reoccurs. We are as cursed as Abraham Lincoln had once predicted, in his second inaugural address – until every drop drawn by the lash shall be paid by another with the sword.

Conclusion: Learn your history. This film may not be as necessary as McQueen’s Twelve Years a Slave, but its one of Spike Lees all time best (easily his best since 25th Hour) and a study worth seeing.