Eternal Sunshine of a Spotless Mind 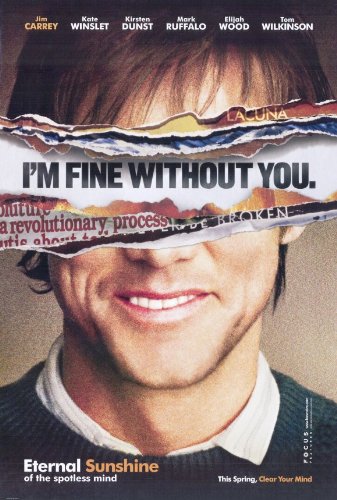 Eternal Sunshine of a Spotless Mind

When their relationship turns sour, a young couple undergoes a medical procedure to have each other erased from their memories.

Twenty-fours after seeing Eternal Sunshine of the Spotless Mind, I was still thinking about it. I watched the movie over a decade ago and I still ponder its mysteries, much in the same way I considered Adaptation and Being John Malkovich. The common link with all three, of course, is screenwriter Charlie Kaufman, arguably the most talented scribe working today, and certainly the most clever. Some may dismiss his craft as postmodern smoke and mirrors, but at the very least it is impossible to remain neutral in the face of his work. When so much of what we see and hear is breathless in its desire to avoid offense (especially in this post-tit culture), Kaufman’s words push us to an unavoidable reaction, even if were not sure of what we’ve witnessed. As I’ve grown to consider Adaptation one of the best films of the past decade (and this from a man who loved it to begin with), I have similar feelings about this latest puzzle, as it is too early to pronounce judgment. I felt warm and charged after my screening, but by no means is this review my final word on the subject.

Starring a wonderfully subdued Jim Carrey as Joel and the always intriguing Kate Winslet as Clementine, Eternal Sunshine of the Spotless Mind is unmistakably a romantic film, but only in that it believes in love without illusions. In fact, Kaufman seems to be saying that the only love worth having is that which accepts flaws, difficulties, and pain. True, self-help literature and feel-good therapy are littered with such thoughts (Take the good with the bad, we could almost hear Dr. Phil saying), but it never ceases to amaze how often we forget that fact. Still, I think Kaufman is after bigger game here, giving us a moving and thrilling examination of memory itself, and how we distort the past at every turn in order to reconstruct the present. Even that sentiment doesn’t appear overly original as I write it, but Kaufman has that strange talent to make the shopworn feel revolutionary, almost as if decades of similarly themed films had never existed. 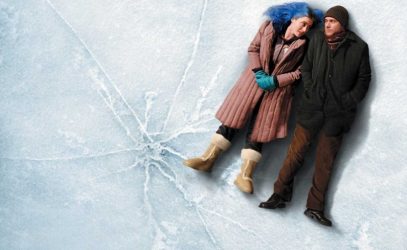 The film begins at the end and works it ways backward (forward?) toward the present (or is it the past?) For once, as much as the structure is part of the films charm, Im not sure it means as much as people are saying. I knew going in that Kaufman is playing with time, and as it went along I felt comfortable following the action. If a film is taking place in a characters thoughts, it must proceed much as we see here. The crux of the story involves Joel’s petty revenge to eradicate his mind of all memories associated with Clementine after he learns that she has done the same. Joel goes to Lacuna Inc., a Kaufmanesque establishment that uses computers and bizarre contraptions to strip the mind of unpleasant thoughts and images. The clinic is run by Howard (Tom Wilkinson) and staffed by the strange Stan (Mark Ruffalo), pathetic Patrick (Elijah Wood), and goofy Mary (Kirsten Dunst). All four are interesting characters in their own right and their stories take turns that cannot be anticipated at the outset. But we are here for Joel and Clementine, two people that might not appear suitable for each other, but belong together nonetheless.

Are Joel and Clementine the sort of couple that exists only in fiction, the romance of destiny that exists in spite of the barriers a cruel world places in their path? Hardly. We can see immediately that the pair have little in common, and although there are moments of joy, they fight most of the time and the differences in personality are more glaring as we go along. Remember, though, what we see of their lives is taken from the mind of Joel, and this is where the film becomes interesting. As we all know (or admit when honesty is a must), our memories are confusing at best; seemingly crystal clear, but as distorted as they must be with the passage of time. What seemed fresh at the time becomes filtered through different contexts. For example, a family trip as a kid might seem nostalgic right at this moment, but can we really expect that an experience as a 7-year-old will be the same as a 30-year-olds memory of it? As much as memories seem real, they can never be re-lived as they actually were. So what we see of Joel and Clementines relationship appears to be a highlight reel because, frankly, that is all it could ever be. We tend to remember emotional highs and lows great sex or fantastic dates; big fights and periods of tremendous loss. As a result, these thoughts run to the front of the line. But what about those hours and hours between those defining events? No one seems to treasure the memories of going to the grocery and sitting around reading the paper, but these times in terms of the amount of time we devote to them far outweigh the big events.

So yes, it becomes impossible for the audience as well as Joel to accurately assess the state of his relationship. We can see why Joel was attracted to Clementine (she complements his passivity with a playful eccentricity), but we also understand why she drove him nuts. We all know someone like Clementine, and many of us have dated such a person. They make us come alive, certainly, but after an extended period of exposure, can drain of us of much needed energy. Their free-spirited nature is great for a few dates, but what of the long haul? Is their flighty behavior and self-indulgence going to cut it when bills have to be paid? In a way, then, it is easy to imagine that any relationship with such a woman is going to be like living with a manic-depressive. In this stands a central truth about our culture. We love the wacky and the quirky when they’re on screen (how many have we embraced as a nation?), but try living with these people on a daily basis. Perhaps that is why we have made little progress regarding treatment for the mentally ill. The movies cause us to romanticize them (they tend to dominate the arts, after all, and many are undeniably brilliant), but they conveniently leave out the frustration, danger, and suffocating narcissism.

And so yes, it is understandable why Joel would want to remove Clementine from his mind, for failed relationships tend to get in the way, do they not? Aren’t closure and moving on what we all seek? But as the film reaches its conclusion (with events better left to experience than my re-telling), Kaufman argues the exact opposite. Memories, then, are neither good or bad, they are simply what happened. It serves no purpose to label our experiences, for they are the sum of our lives and without them an identity is impossible. Kaufman is passionately, defiantly arguing against the notion that the past should always be pleasant, and pain need not be classified. Its not there to make us stronger or remind us of what matters, but simply is. And why not embrace it? Why in the hell should we expect a relationship especially between a man and a woman, considering how different they can be be all sweetness and light? I contend that so many relationships fail because we hold them to a ridiculous Hallmark-inspired standard that assumes we should always be moving forward. What in the hell does that mean, anyway? What’s wrong with running in place? We are far better served when we accept that relationships rarely make any sense and yet, we still run headlong into the madness. 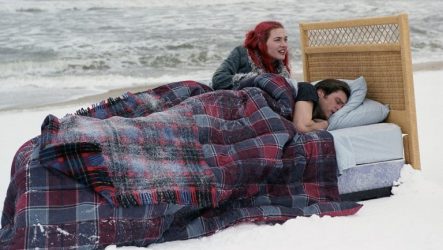 The title is, at bottom, little more than an elevated way to say ignorance is bliss, and it baffles me how desirable that state of mind continues to be for so many. Our continuous battle over the past whether among isolated academics or when politicians play the blame game is based on the comfortable lie that we can capture a picture-perfect experience of times gone by. We can do our best and present workable theories, but it will never be the same as when it actually occurred. It wasn’t even true when it happened, as those people were also filtering their lives through distortion and myth. Am I saying that understanding truth is damn near impossible? Exactly. Absolutes are for tyrants, and I’m far too cynical to accept anything at face value. A movie like Eternal Sunshine of the Spotless Mind is so essential because it celebrates our tentative hold on reality, and insists that we can still thrive and grow and live, even with such imperfection. Joel and Clementine don’t live happily ever after, but they do live with the knowledge that such a course has never been possible. Whats more, its not all that important anyway.