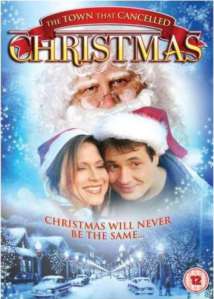 This is a movie about Jerks.

A Merry Little Christmas (2006), a.k.a The Town That Banned Christmas is without a doubt one of the dumbest, most unnecessary and incompetently made Christmas Movies I have ever watched. Don’t worry, A Meowy Christmas will always take its place as the worst Christmas Movie ever made, but this one is certainly in the top 10.

Here is the plot, and I use that word only as a concept. There is a town in which Jerk #1 lives. Jerk #1 is obsessed with Christmas and always wins the annual Christmas decoration award. Jerk #2 is a newcomer to town and and decides to try to win the award as a social experiment because he is writing a book. This movie is almost an hour and a half long, and I swear, the idiots in this movie do nothing but talk about the Christmas contest for the first 75 minutes. Oh, and one of the characters is Black. In one of the most boring subplots ever, son of Jerk #2 falls in love with daughter of Jerk #1. She is literally the girl next door. Are you asleep yet?

The dumbest town mayor ever was the judge of the contest and declared it a tie between the two Jerks. There was a riot over this decision, and this genius of a mayor executed an executive order banning Christmas in this town. All the decorations, trees, gifts, lights, etc. were rounded up and taken away. Even the Starbucks cups were banned. Son of Jerk #2 whittles a heart out of a piece of wood and gives it to daughter of Jerk #1 as a Christmas present. The police mysteriously arrive and arrest the two kids for violation of the Christmas ban. No, I’m not making any of this up.

Anyway, the two Jerks reconcile, jerk each other off at the Town Square, and the mayor is so aroused and impressed that he reinstates Christmas. No, that is not what really happened, but this sort of plot twist would be exponentially more interesting than anything that actually happened in this wretched movie.

ZERO/10.0 With the Goatesian rating of Bah-Humbug and a projectile vomiting Warning