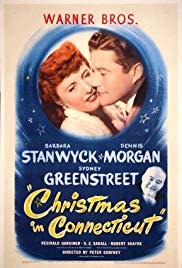 I’ve reviewed a dozen or more Christmas Movies this season. There have been good movies and bad, but mostly bad. White Christmas was pleasantly dated, but watchable. Except for Mercy Christmas, most of the horror/slasher Christmas Movies were just poorly made. Christmas In Connecticut is in a class of its own. This was the most difficult to finish Christmas Movie that I have ever encountered, and that is a bold statement.

Elizabeth Lane (Barbara Stanwyck) was a famous town & country magazine writer whose entire column was based on a lie. She pretended to be a great homemaker and cook, when in fact she was a New York City gal with no domestic skills. She was not even married, much less a skilled cook and mother. 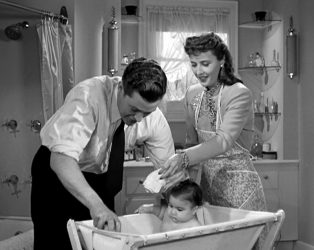 Does this baby even remotely look like Elizabeth? Uh, no.

Her deception came back to haunt her when a nurse had a brainstorm. A nurse (Joyce Compton) had been caring for a sick Sailor (Jefferson Jones, played by Dennis Morgan) who had been lost at sea for 16 days. She wrote a passionate letter to Elizabeth Lane’s magazine publisher, Alexander Yardley (Sydney Greenstreet), a gruff and inflexible publishing tycoon. Jefferson Jones yearned for a visit to a country home complete with great meals the domestic experience. Yardley was so touched that he insisted that Elizabeth Lane invite Jones to her country estate and home, which did not exist.

In a desperate attempt to not be outed and fired, a hasty, but ill thought out deception was planned. Lane was to pretend to be married to her clingy architect admirer, who just happened to own a country estate. All of the players, including a fake baby, arrived at the fraudulent estate, almost simultaneously, and Oh what a tangled web we weave. 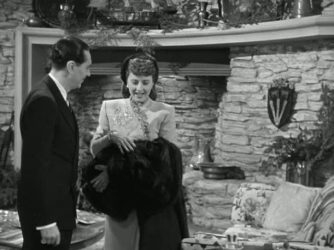 The happy Bride and Groom. Not.

This movie was a mess. It gives me a headache to even write about it. Elizabeth did not even know the gender of her fraudulent baby, much less its name or how to care for it. Enter Jefferson Jones, the Sailor. Elizabeth did not give a hoot about her fake husband, but instantly fell in love with the Sailor man. It was amazing that he longed for the domestic experience but mysteriously was an expert on bathing babies, caring for babies, changing diapers, cooking, sewing and the best way to use a rocking chair. He also knew how to play the piano and sing. Go figure. There were too many characters running over each other. Felix (S.Z. Sakall) was so annoying that I longed for his immediate death via meat-cleaver administered by Nora (Una O’Connor) whose kitchen he had invaded. Guess which character in this group photo is the most annoying

I won’t go on with more of the plot, but there were plenty of holes that lazy writers tied up to ensure a happy ending. Movies often require you to suspend disbelief, but this movie was ridiculous. I had rather watch Krampus: The Christmas Devil and yes, even A Meowy Christmas in an endless loop than to ever watch this movie again. Barbara Stanwyck is a great actress, especially in noir films, but she was wasted in this totally cringe-worthy movie. It was not cute, not funny and not watchable.