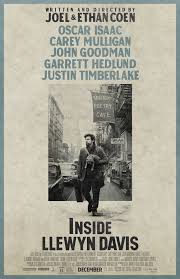 Inside Llewyn Davis (2013) was, thankfully, one of the least whimsical of the Coen Brothers films; a story of ellipses and evasions, chronicling not the expected rise and fall of a folk musician, but simply a moment in time now lost to history.

More a character adrift than one with an ultimate destination. Unlike the overrated American Hustle, which felt cheap and artificial at every turn, Inside Llewyn Davis is the more lived in work, an authentic account of bland browns and somber grays so of its time, it never betrays its contemporary production.

For the few days we spend with Llewyn, we don’t much like the guy, but rather than define him as a simple anti-hero, his unpleasantness serves to illuminate his ultimate failure as an artist. While he has talent to burn (a particularly savvy sequence contrasts him, albeit briefly, with Bob Dylan, and against the odds, we prefer Davis), he hasn’t the soul for success.

Its more than ability, charm, or appearance; its the belief that one has a gift to bestow, not merely the unfurling of a deep, dark burden. As such, he lacks the unconscious drive that cannot succumb to distraction. And while Davis possesses the requisite selfishness in spades, its more self-destructive than motivational, channeling his needs away from the eventual goal.

Hes the ramblin’ man of old, though one particularly long on rootless despair. In the end, its a journey of waste and unfulfilled longing; the man with something to say, but without the nerve to make a true lasting impression beyond asking for money, or a mere couch for the night. He comes and he goes, one of many ghosts in an America that all but produces them wholesale.