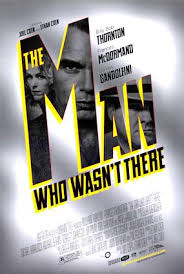 When your wife is having no sex with you, but plenty with her boss, drastic measures are taken.

In her relatively small, but pivotal, role as Birdy Abundus (what a name!) in The Man Who Wasn’t There, she not only beguiled Billy Bob Thortons cuckolded, confused, and revengeful barber Ed Crane, but a much younger yours truly. It was a mature, impressive performance which hinted at the star she would become.

It is probably a terrible thing to remember a movie because of an actress who only had only a small part. Yet, I remember The Man Who Wasn’t There, because of Scarlet Johannson.  She became the go to crush for men with a pulse with her breakthrough role in LOST IN TRANSLATION (2003). Later, she was a kick-ass Marvel superhero, so Scarlett Johansson already had my heart. In 2001 she co-starred in two movies GHOSTWORLD, and the one I am writing about. It was the latter film that cemented her name in my personal lexicon of the desirable.

I am not stating that the movie is unmemorable without her. In many ways she was just the catalyst that greased the twisty film noir mechanisms. For Ed Crane she was a fantasy symbol of what his life should and could be. Birdy was his gifted piano student; young and dangerous, and very forbidden fruit. Thorton played Crane with deliberate sadness. It was a masterful performance, so pitch perfect, that it was at times painful to watch. We know where Ed was headed. We knew this would not end well. There would be blood in his future, and not just from a nick while shaving someone in the smoke filled barber shop .

The supporting cast included James Gandolfini, Michael Badalucco, Tony Shaloub, (always welcome!) and Coen regular Frances McDormand, who were all predictably terrific. There was also Richard Jenkins (Birdy’s attorney father) and Jon Polito (The Big Lebowski and Miller’s Crossing).  The Coens do not scrimp on the cast, that is for sure.

The 1949 period art direction was meticulous and detailed. The Coens actually were inspired to make this movie from a poster of a barber that was used while making THE HUDSUCKER PROXY. The movie, interestingly enough, was shot in color to be released in other countries like Japan. However, in the United States it was screened in glorious black and white. The lustrous cinematography is by the great Roger Deakins (Blade Runner 2049). You can see both color versions on the newest DVD releases. The black and white is the superior choice, as it serves the tone of the movie perfectly.

Like most Coen movies, TMWWT was not a huge money maker. Critics were mostly kind to it, though some complained about the length. Critic Roger Ebert describes a run in with such a critic: at Cannes, I emerged into the sunlight to find Michel Ciment, the influential French critic, who observed sadly, ‘A 90-minute film that plays for two hours. Ebert agreed to an extent, but reasoned that a shorter film would sacrifice the style the Coens had painstakingly created for the film. I agree with Ebert’s conclusion.