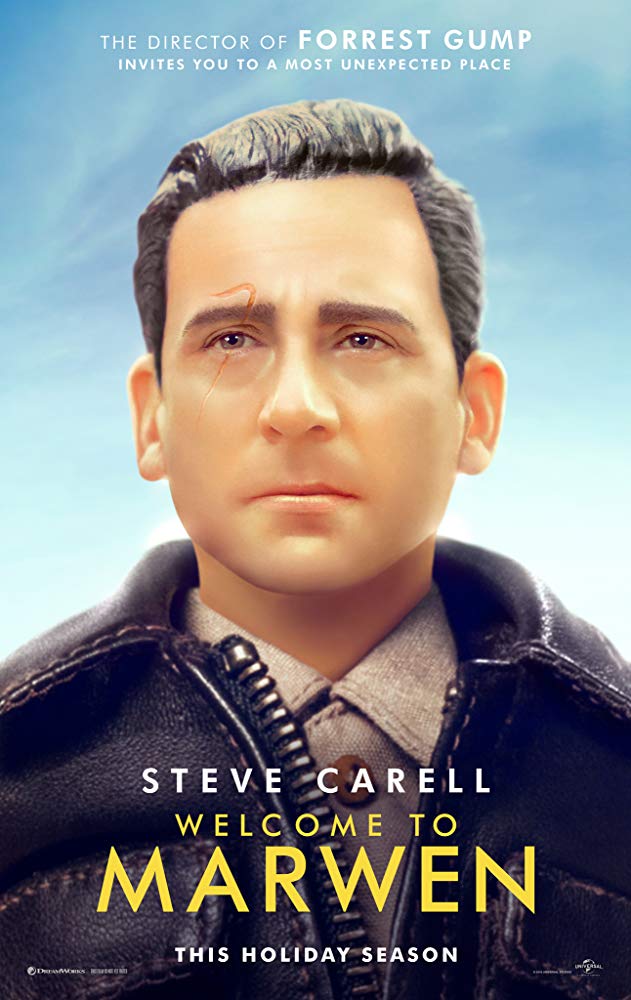 How to cope with PTSD. One way at least.

There is such a thing as too much political correctness, but chances are high you have not actually experienced that situation.  The general rule of thumb is if someone is complaining about political correctness, that person is really just whining that he or she can’t be an asshole to other people without repercussions.  Those same people bitch about others needing to take responsibility for their actions, but denying they should do so themselves.  Hate crimes occur in this kind of environment and a hate crime is the catalyst for Welcome to Marwen.

Mark Hogancamp (Steve Carrell) is an artist, beaten to within an inch of his life outside a bar one night.  Due to the attack, he cannot remember any of his life from before the attack, he must relearn how to walk, and can no longer draw (he was an illustrator).  To cope with his PTSD, Mark channels his creativity by photographing an elaborate setup of dolls.  Couple that with an addiction to painkillers and you get hallucinations where the doll world comes alive.

A film played straight about a guy taking pictures of posed dolls would probably be really boring.  But for a large chunk of the film, we get to watch those hallucinations with Mark.  The dolls act out events in a little model town called Marwen, set in Belgium in World War II.  The hallucinations feature five women of different nationalities and Hogie (Mark as a doll American fighter pilot) facing off with a group of Nazis.  The events always feature shooting and killing, but the dolls continue to come back to life for the next hallucination.  At a deeper level, this is a little heartbreaking because Mark cannot exorcise his demons when the demons never truly die.

Early in the film, we find out that all of the dolls represent someone in his life and we eventually get to meet all of them.  However, one weak point in the film was that just two of the human women get more than a cameo in the story.  Fleshed-out supporting characters would have helped us understand why Mark chose them to help defend him in his fictional town of Marwen.  One of the dolls, Nicol, is a woman who moves in across the street, whom Mark develops an instant crush on.  Of course, Nicol soon finds her doll doppelganger in the town, though she is okay with this.  Mark and Nicol develop a friendship and we can see the glimmer of hope for Mark.

Despite the weak supporting characters, the rest of the film is very solid.  If you are able to see beyond the surface of the film and the somewhat childish feel of the doll aspect, there is a lot of emotion to be felt.  Carrell does a great job of convincing us of his trauma and we sympathize as he struggles to stay afloat while seemingly sinking deeper in the abyss.  The film does a good job of balancing the fantasy and the real world scenes, never confusing the audience as to which is which.  Of particular note is the first of two courtroom scenes in which Mark must be present during the sentencing of his accusers.  He stays strong as long as he can, but loses it fairly spectacularly (not a good way).  If you are not rooting for the guy at this point, I am pretty sure I know who you voted for in the last couple of elections.

Unfortunately, the movie does not stand a chance at the box office.  In Trump’s ‘Murica, this movie about PTSD, sympathy, hate crimes, and social issues that make non-empathetic people squirm will simply be ignored by a large swath of people who definitely are not responsible enough to vote.  And, that is after you get to the fact that Welcome to Marwen is competing with Aquaman, Bumblebee, and Mary Poppins Returns at Christmas time.  Sadly, Marwen will be a victim to converging circumstances, one of which is a label of being too politically correct.  Just remember the general rule.

Rating: Do not ask for any money back, but do ask for the soul of our country back.