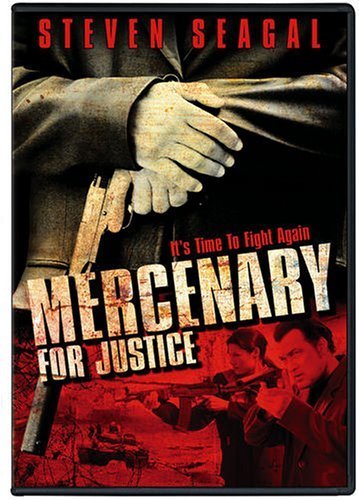 Steven Seagal is back, bigger than ever, and must break into an Eastern European prison to free the son of a Druglord

I am a big fan of trash cinema and I have come to realize that Steven Seagal movies don’t receive enough attention. [EDITOR’S NOTE: They do at Ruthless] So for my first review, I have spent the hour and a half watching the 2006 film Mercenary for Justice, so that you do not have to.

With 1988 Above the Law, martial artist Steven Seagal exploded on the screen, with his tall lean good looks, and a martial art (aikido) that hadn’t really been seen on screen before. He had a string of hits throughout the 80s and 90s, staring alongside Kelly LeBrock, Michael Caine, Keith David, Tommy Lee Jones, and Kurt Russell. For a decade his name was in the same echelon of 80’s Action stars as Stallone and Schwarzenegger. Then in the late 90s Seagal went from Hard to Kill to Hard to Watch.

I’m fascinated by watching one of the biggest up and coming action stars of the 80’s and 90’s slide into the cinematic equivalent of dumpster diving.

Our movie starts off with Mercenary for Justice being plastered on a black screen in the Arial font. It’s almost as if the movie wants you to know that if you were expecting quality or effort, you can forget it. The title screen design is almost as lazy as the writing and the acting you’re about to behold.

So we kick things off with a phone call between CIA man John Dresham, and the guy who arranges teams for black ops Anthony Chapel. Of course from this point on, everyone will be referred to by only their last name, because it sounds cooler that way.

A team of mercenaries were hired by Dresham, through Chapel, to help spread democracy to the Galmoral Island. Unfortunately the mercenary team has been pinned down by the French Army. In the midst of an epic battle, with lots of stock footage of tanks firing, a dark haired attractive reporter asks the French general if she can go and do an interview with the mercenaries, because why not?

Well the jokes on them, because the reporter is actually someone who gathers intelligence for Seeger and his team. While this battle rages on, half of Seeger’s team have gone to kidnap the French ambassador so they can bargain for the freedom of the mercenaries. The French general of course orders his troops to cease fire, but apparently in the French military, a superior officer giving an order is more like a suggestion. The result is the French ambassador, his family, his chef, his maid, and his butler are all blown up.

During the chaos following the French ambassador and his housing staff being killed, the mercenaries make kill Seeger’s good friend (I’m not making this up) Radio Jones gets shot. Seagal, sorry Seeger, promises that he will take care of his family, and proceeds to try to carry his body to the helicopter they are using to make their escape. But alas, there is no room in the chopper, so Seeger must leave Radio Jones body behind.

All of this so called action is followed by Seeger visiting Mrs. Radio Jones, and Radio Jones Jr. and giving them a roll of greasy dollar bills, because Seeger is going to take care of them now. He swore it, and for some inexplicable reason, he has decided that he is going to get Radio Jones body back, and get him the military funeral with full honors that Seeger thinks he deserves. Never mind that he was a mercenary, and was killed fighting the military of a US ally.

Not to bore you with details, but the next hour includes:

Finally, the movie close on a shot of a casket draped in an American flag, because somehow during all of this nonsense, they managed to get Radio Jone’s body back.

If none of that actually seems to go together or make much sense, then you have a pretty complete understanding of this movie. It is a dizzying flurry of stuff that just happens, and a weird faithfulness to the action movie tropes.

This is absolutely a bad movie. Anybody can see that. But it’s also weirdly entertaining. Trying to sort out what is actually happening in the movie becomes kind of a game.

To look at the film on technical merits, there is plenty wrong with it.

The film is over edited. Perhaps it was cut to keep the run time down, but they didn’t want to lose any of the subplots. So it comes off as overstuffed, and without the connective tissue to tie the story together. Without the exposition as to why anything is happening, none of it makes much sense. It almost seems as if someone dropped the finished film in a document shredder, and someone else tried to piece it back together, and that’s what got released.

Worse still are the action scenes. Seagal is obviously teetering on being morbidly obese, and he’s lost some mobility due to his size; so they try to pump up the action in editing with shaky cam, jump cuts, and doing whip-pans for almost every hit. It is unintentionally hilarious.

IMDB credits Steven Collins as the screenwriter, who has only 2 writing credits. Both are Seagal films, and both came out in 2006. I’m pretty much convinced that Seagal wrote them himself, and is hiding behind a pen name. The reason I assume the connective tissue didn’t wind up on the editing room floor, is that it comes off like screenwriter for this film assumed that the tropes were so well known, that he didn’t need to waste any ink actually fleshing them out in the screenplay. Instead, he just focused on writing the scenes that had action stuff, because that’s what people actually paid to see, right!? The other clue that Seagal may have been the author is that every line of dialogue in the film drips with what would be the most bad-ass thing to say here?

You can begin to see that Seagal is playing the same character over and over here. No matter what the film, he is the best. At everything. Ever. Oh and the ladies love him. All the ladies.

Film as a film rating