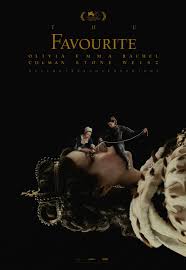 A sick and depressed Queen Anne rules England, but with the help of two other women. Three is definitely a crowd.

The Favourite is yet another brilliant film from the young Greek auteur Yorgos Lanthimos. Unlike his previous films, like The Lobster and The Killing of a Sacred Deer, The Favourite is a vicious comedy and historical period piece, centered around the 18th century royalty in England. Yes, a comedy. We had men in ridiculous and garish makeup and garb, and wearing powdered wigs. There were duck races in the halls of the Royal Palace, and grown men getting their jollies by throwing fruit at a naked court jester. There was breakdancing. Embedded in this frivolity, we also had a movie that was bawdy, merciless, and relentlessly ruthless.

We also had the best tandem of female actresses I can ever recall. Forget the wigged men. They were just for waging war, providing seed for conception, and comic relief. Emma Stone, Olivia Colman and Rachel Weisz provided such incessantly brilliant performances that the Oscars need to forge 3 and give them all one. If you think you have seen manipulation, betrayal, and remorseless ambition before, wait until you get a load of these performances.

Abigail Hill (Emma Stone) was unceremoniously dumped at the Queen’s palace. She was a former aristocrat and cousin of Lady Sarah who had fallen on hard times, and was humbly looking for any sort of employment. She was mocked by the royalty and mercilessly pranked and trolled by her fellow servants and maids. We immediately sympathized with her as she was actually beaten for daring to help Queen Anne by treating her debilitating gout with herbs gathered in the forest. Lady Sarah, (Rachel Weisz), who had almost total control over the Queen’s thoughts and actions, intervened and elevated Abigail’s status to personal maid to the Queen.

After surreptitiously observing the real depth of the relationship between Queen Anne and Lady Sarah, Abigail showed her determination and ambition, so the competition for the Queen’s ear and affection commenced. I like when she puts her tongue in me -Queen Anne. Spoiler Alert! Whoops, too late! Lady Sarah and Abigail are all in. There is virtually nothing that they would not do to be the Favorite of the Queen, and in a position of unbelievable power.

I cannot go further into this review without highlighting and reiterating the powerful performances of the three female leads in this movie. The Favourite has so much going for it with the captivating soundtrack, stunning visuals of the never-ending rooms, lush paintings and tapestries, and the gorgeous costumes. What sets this movie apart is the acerbic dialogue and sandpaper like viciousness of the three women leads.

Queen Anne (Olivia Colman) This Queen had absolute power; power to make war or make peace, to raise taxes and to banish, but this Queen had issues. She was morose, depressed and physically debilitated by punishing and chronic gout. We found out why she was so depressed as she had lost SEVENTEEN children during, or shortly after childbirth. She consoled herself with 17 pet rabbits (more on this later) and eating. She was so crippled, emotionally and physically, that she depended totally on Lady Sarah for her well-being and decision making. Colman’s portrayal of this totally unhinged, sometimes comical and almost always irrational Queen, was nothing short of a tour de force.

Lady Sarah (Rachel Weisz) Lady Sarah was a powerhouse. Not only did she have the Queen’s ear, she called all the shots. Whether it was a tax increase, a continuation of war with France, or a New Prime Minister, Lady Sarah imposed her will. She faced down and withered the hapless Royal men in this 18th century English landscape. Her focus and ruthlessness were only matched by her genuine love and affection for her Queen. She was an immovable force, that is until an even more ruthless villain came on the scene.

Abigail (Emma Stone) Even though our sympathies and allegiance were with her early on, we quickly saw a different Abigail once she got a crease of an opportunity. Move over Nurse Ratched. Take a hike Lady Kade. See you later Alex Forrest in Fatal Attraction (Ouch again for the rabbits, damn!) The men in her life got off with a kick in the nuts, a beating, or blue balls on their wedding night. The fate of any woman that stood in her way was much, much worse. Emma Stone just shredded and killed her role in this movie. She was not in La La Land anymore. Look for Best Supporting Actress for this performance.

The Favourite was just a gorgeous movie. It was not just the sets, costumes, rich tapestry and opulent grounds of the castle. The screenplay was brilliant and the soundtrack was haunting and unforgettable. The camera work with fish-eye lenses and long, looming shots of the seemingly never-ending hallways gave this movie a surreal, Alice In Wonderland look (Oh, my, rabbits again!)

The acting has been mentioned more than once and it was virtually without peer. What else can I possibly add about this great film? Yorgos Lanthimos achieved the impossible by making a movie that was a kaleidoscope of humor, vicious vindictiveness and a historical period piece that was also a scathing satire and commentary on the British Royalty and their subjects.

The Favourite might very well be the best movie of 2018 and should take home a lot of gold. I cannot recommend this movie enough.

10.0+/10.0 With the Goatesians Seal of Approval For Excellence