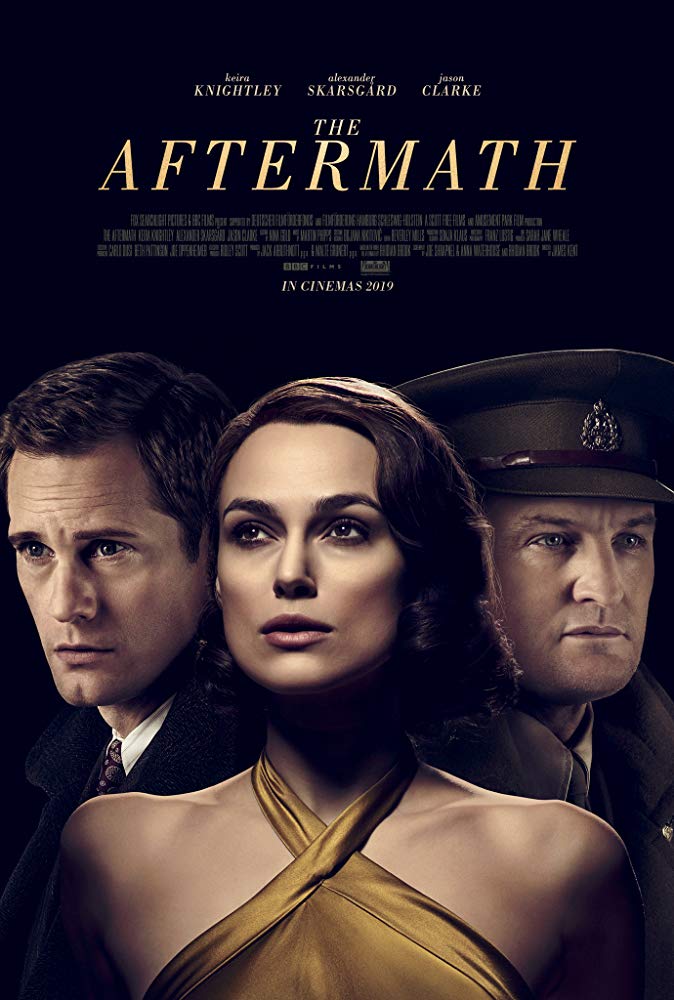 If Days of Our Lives happened in post-WWII Germany.

Prior to screening The Aftermath, I was looking for a quick synopsis of the film because I knew nothing about it.  The first thing that popped up in the Google search was a review for The Aftermath subtitled “The Aftermath is the cinematic equivalent of crying after sex.”  This nearly made me spit-take coffee all over my laptop.  On the surface, it is a hilarious way to describe a movie and is full of possibilities.  Imagine my disappointment when, after watching the film, I went to read the article and discovered that I would have to subscribe to a Canadian newspaper called The Globe and Mail in order to read it.  That is definitely not going to happen.  I can’t even see the name of the writer without the subscription, so I am going to have to live with never knowing what the writer meant.  And, judging by that byline, it is probably really funny.  Which is the exact opposite of The Aftermath – decidedly not funny.

The Aftermath is set in post-World War II Hamburg, Germany, about five months after Germany surrendered.  Sweeping aerial shots show us the decimated husk that is Hamburg, including thousands of German people living on the edge of starvation in tent cities.  See?  Not funny.

(SPOILER ALERT.  If you want to figure out on your own why this film is the equivalent of crying after sex, stop reading now.)

Rachael Morgan (Keira Knightley) arrives in Hamburg to meet her husband, British Colonel Lewis Morgan (Jason Clarke), who has been placed in command of the British occupation forces in the city.  The couple is assigned to live in a mansion commandeered from German architect Stefan Lubert (Alexander Skarsgard) and his daughter, Freda (Flora Thiemann).  Stefan has prepared to relocate to the tent camp, but is surprised with Colonel Morgan invites Freda and him to stay and live on the third floor.  See what the screenwriter/author (this film is based on a book I have not read) did there?  Also, awkward.

Given that this movie is classified as a drama/romance, you don’t get any points for guessing where the main storyline of this film goes.  And of course it goes there.  Rachael is forced to live in a recently conquered country, with a husband she hasn’t seen in years and who is constantly running out to deal with flare-ups, in a house that isn’t hers, with a polite, hunky man who looks suspiciously like Tarzan.  What you might not guess is the movie does exactly zero work to develop the affair beyond Stefan yelling at her to kick them out of the house early in the film.  He literally forces a kiss on her during this exchange in order to piss her off to further persuade her to evict them.  Instead, love blossoms.  Or something.

Rather than develop the characters to the point where the affair is believable, the film elects to defend the affair with dead kids.  No, seriously.  Both Stefan and Rachael are coping with their children having been killed in bombings of their home cities.  On top of that, Stefan’s wife is also dead.  With Lewis constantly away, that leaves two lonely, grieving adults sharing a giant house together in a war-ravaged city.  Who doesn’t get naked in that situation?

Stefan and Rachael aren’t the only forced relationship.  Freda hates having to share their house with the Brits and, at one point, literally hisses at them on her way out the door to school.  By this time, she is stealing from them and giving the ill-gotten goods to a German resistance group still fighting for Hitler.  Yet, two seconds later, she is having a tender moment at the piano with Rachael, playing a duet together.  Suuuure.

Soapiness aside, everything in this movie deals with the aftermath of something.  War, bombings, death, Nazis, absentee husbands who irrationally blame their wives for their death of their sonsâ¦pick your tragedy.  And all of them have consequences, be it illicit affairs, Germans who refuse to admit defeat and continue killing people, pissed off daughters forced to share their house with the conquerors, broken marriagesâ¦pick your tragedy.  This cornucopia of sadness is so plentiful it suffocates the development of everything in the film.  What’s left is a far from believable affair and a bunch of distracting side stories.

The news is not all bad.  The cinematography is gorgeous, as are the costumes.  If not for all the death and sorrow, it’s a lovely film.  Maybe that is what that critic meant about crying after sex.  If something is pretty enough, you’ll convince yourself to sleep with it, but you won’t feel good about it afterward.

Rating: Ask for all of your money back.  It really isn’t that pretty.