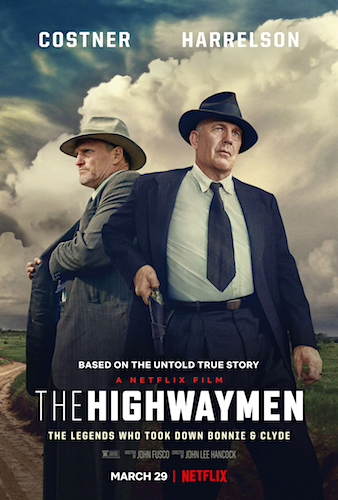 Arthur Penn’s 1967 version of Bonnie and Clyde featured the gorgeous, but ruthless killers Bonnie Parker and Clyde Barrow. With Warren Beatty and Faye Dunaway, you had one of the the hottest tandem of sexy couples since Cat on a Hot Tin Roof. Bonnie and Clyde was a groundbreaking blockbuster because of its shocking violence in the reenactment of the final shootout bloodbath.

The Highwaymen was not about Bonnie And Clyde, it was about finding and killing Bonnie and Clyde. The infamous duo was barely seen during the entire movie. There are some long shots, but no face shots as this murderous twosome was always several steps away. The hordes of lawmen and F.B.I. agents just couldn’t close in on the elusive bank robbers. Worse still, Bonnie and Clyde had orchestrated a successful prison breakout for some of their gang members. Bodies of law enforcement men and felonies were stacking up and Ma Ferguson (Kathy Bates), as governor of Texas, decided it was time for some drastic action. The Texas Rangers had been decommissioned several years before, but Ma decided that it was time to resurrect them.

Frank Hamer (Kevin Costner) and Maney Gault (Woody Harrelson) were two over-the-hill and retired Texas Rangers, that were again called to duty, Unforgiven style. They were old, overweight, and rusty, but they soon regained their sleuth and swag as they relentlessly tracked Bonnie and Clyde.

The Barrow gang were now national folk heroes, in spite of their crimes. The devastating effects of The Great Depression were portrayed vividly, Grapes of Wrath style, and many viewed the Banks and the Government as the enemy, not Bonnie & Clyde. Complicity by family members and the general population, plus the ineptness of local police and the F.B.I. impeded the hunt. In spite of these headwinds, Maney and Pancho quickly got up to speed, and like a stealthy machine, closed in on the bad guys.

We all know the ultimate fate of Bonnie & Clyde, so there are no real spoilers in the outcome. I didn’t read many of the mostly negative reviews of The Highwaymen, but after watching this excellent slow-burning film, I disagree strongly with the naysayers. John Lee Hancock and John Fusco did an excellent job of bringing to the screen the other part of the Bonnie & Clyde story. This movie is one of the best efforts ever for Netflix and along with the aforementioned writer and director, Kevin Costner and Woody Harrelson are why. This one has been on the drawing table for a while, as the original targets for the two Texas Rangers were Paul Newman and Robert Redford!

The Highwayman was a gritty, methodical and historically accurate portrayal of the tracking and ultimate execution of a murderous duo who would not be taken alive. The writing, sets, cinematography and direction were superior in this Netflix original, but it was the acting and interaction of Costner and Harrelson that put this one way over the top. There were no exploding cars, superheros or raging special effects, just fine acting, pacing and character development. If you have Netflix, do not miss this one.

8.0/10.0 With the Goatesians Seal of Approval for Excellence