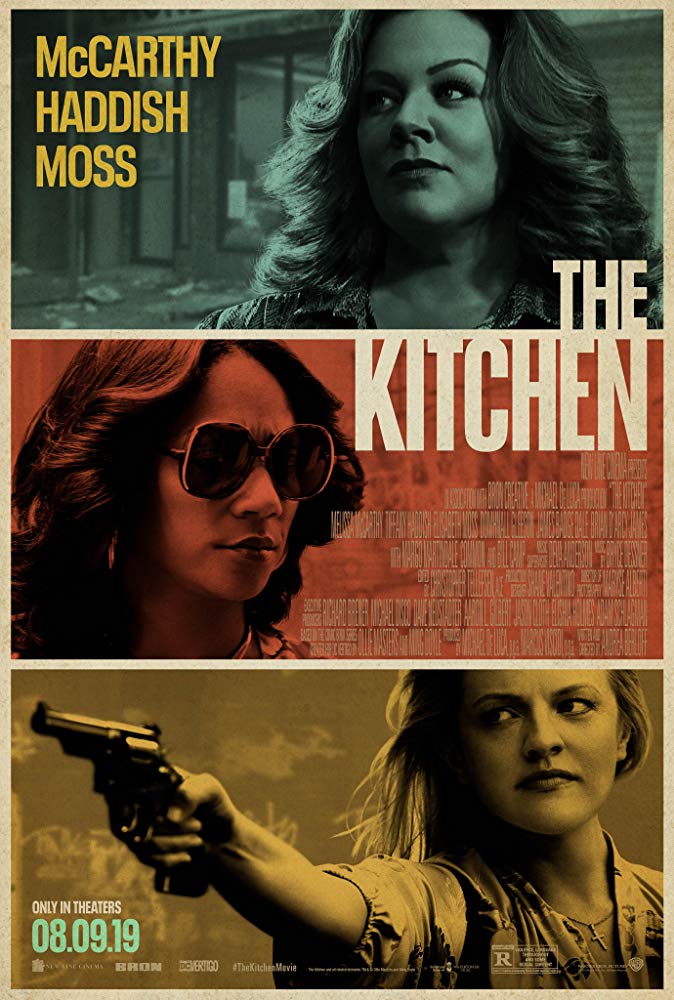 The Kitchen might be one of my favorite cases for guessing what the movie is about when you only know the title. The Kitchen could be a spinoff of Downton Abbey. It could be a Bobby Flay documentary. It could be a horror film in which Gordon Ramsey murders the entire cast of a cooking reality show set in a cabin in the woods (and none of this PG-13 bullshit). The possibilities are endless. In this case, The Kitchen is about three women who take over the protection racket in the Hell’s Kitchen area of New York City in the 1970s. I am disappointed about not getting to see Ramsey bludgeon someone to death with a meat tenderizer, but, sure, racketeering it is.

Our story begins with the introduction of our three main characters. Kathy Brennan (Melissa McCarthy) is a loving and loyal wife, caring for her two children and husband. Ruby O’Carroll (Tiffany Haddish) is married to the son of mob boss Helen O’Carroll (Margo Martindale) and Helen really disapproves of the young, black Ruby marrying into a white Irish family. Claire Walsh (Elisabeth Moss) is a punching bag for her abusive husband. All three are married to men working as low level enforcers/protection money collectors for the O’Carroll crime family. When the three husbands are caught and arrested during an attempted robbery, their respective wives are suddenly left fending for themselves.

Since the movie only has a 100-minute run time, it does not take long for the women to resort to collecting protection money from local businesses (Helen goes to a job placement agency, but that is the extent of their job search). The women’s pitch to proprietors is that they will actual provide the protection the proprietors are paying for, since Helen had stopped providing the protection long ago (while still collecting payments). They quickly take over much of the Helen’s territory and the movie becomes a question of how long will the women last.

The biggest flaw with this film is how rushed it feels. After telling us how Helen was providing no protection, the film spends a scant a couple of minutes showing us the women’s enforcers shooting a pimp and chasing away a couple of homeless people, then jumping ahead to the intra-mob warfare. We need to see this development to be able to identify with the women as the noble gangsters, but the film plows right on past development to get to the mob stuff. It’s like expecting a full season of your favorite team, but getting Tigers-Marlins instead.

This holds for other aspects of the film as well. Ruby lacks the most development of the three women, mostly just a walking sneer who, halfway through the film, starts turning on Claire and Kathy for no reason. When she goes after Helen, there is no real satisfaction because neither character has really earned much reaction from us. Then, there is the reveal at the end, which is unceremoniously dropped on us with no work whatsoever to get there. Even worse, it doesn’t make sense, especially when Kathy realizes where some of their money had disappeared to.

It’s not all shrugs and mehs though. McCarthy proves that her dramatic turn in Can You Ever Forgive Me? (which I still have not seen) was not a fluke. As much as I loathe her comedic films, she was actually the main reason I wanted to see The Kitchen in the first place. Moss is also very good and her Claire is easily the most sympathetic character in the film. Claire gets sympathy partially because her abusive husband is an asshat, but moreso because Claire embraces her criminal evolution with infectious glee and finds a stabilizing companion in Gabriel O’Malley (Domhnall Gleeson) who wants nothing more than to live for Claire. The two of them are most definitely a Bonnie and Clyde analog, but, to paraphrase Schwarzenegger in Kindergarten Cop, “the people they killed were all bad.” Just remember that when Gabriel instructs Claire on how to properly dispose of a body.

One last thing I liked was that the film doesn’t use gender as a crutch, which is what equality actually means. The proprietors don’t blink at switching their allegiance from a man to a woman because all they care about is getting something for their money. An Italian mobster (Bill Camp) in Brooklyn makes a deal with them because it is good business, not because he has a soft spot for them. Gabriel and Claire enjoy a bit of role reversal, with Gabriel hanging on Claire’s every word and Claire taking charge of their relationship. Finally, Kathy, who starts off as the good wife and mother and must inevitably make a decision based on logic rather than stereotypical female emotion. The phrase “a woman’s place is in the kitchen” is wholly redefined in this film.

Unfortunately, the solid parts of this film are not enough to overcome its shortcomings. The rushed pacing and shoddy development make the movie seem over-edited; like far too much was left on the cutting room floor. More time should have been spent developing characters and Hell’s Kitchen itself to help the audience understand any of the stakes in play. On the bright side, I am glad to know that I can sit through and even enjoy a McCarthy performance. Though, I would have enjoyed a Ramsey performance much more.

Rating: Ask for seven dollars back and all that footage that was cut.