Home / Featured Posts / American Sniper: Another look at some unrealistic aspects of this movie

American Sniper: Another look at some unrealistic aspects of this movie 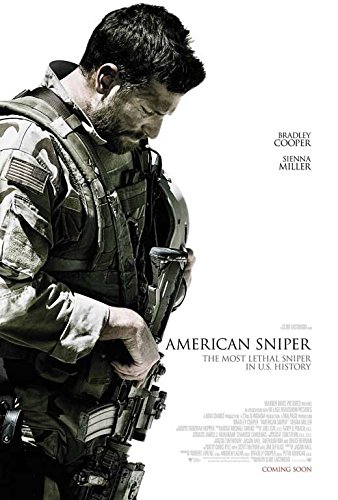 This is a disclaimer of sorts that you’ll see before certain films featuring tales of real-life individuals and events. Such is the case of the Clint Eastwood film, American Sniper.

Kyle himself co-authored the book that the film is based on, but did not have a hand in the screenplay. Certain “artistic liberties” were taken to fill in holes in the narrative and to generally make the movie more interesting to the audience.

Sometimes changes were made simply for the sake of familiarity. For example, the real Chris Kyle was clean-shaven the majority of the time he was deployed to Iraq.

Bradley Cooper is sporting a beard in the scenes where Kyle is deployed to Iraq. This is simply because that is how most of America pictured the sniper. Once he returned from his deployments he grew a beard and kept it until his passing in 2013.

Kyle didn’t join the Navy because he witnessed the results of a terrorist bombing on television and was motivated to do his part. In reality, Kyle was injured performing “saddle bronco bustin” in various rodeos throughout Texas. One injury was so bad he had to have his pins inserted in his wrist so his hand would work correctly.

When he could no longer rodeo, he took a job as a ranch hand. During this period of his life, he spent a lot of his money partying with rodeo groupies. This left him broke and looking for other work. This is when he approached Navy recruiters in an attempt to enlist.

At first, he was turned down because of the pins in his wrist. He returned to work on the ranch. Before too long though, the Navy called him back and reversed their earlier decision to turn him away.

When Kyle reports for SEAL training, he is given a hard time from the instructors because of his age. The film has him going through the training at age 30. When movie Kyle tells an instructor his age he is told, “Thirty! Hell, you’re old enough to have fathered half of these boys!”.

In reality, Chris Kyle went through SEAL training when he was 24. I have no idea why they would have made him older in the movie. I just don’t see any reason for it.

His wedding to Taya wasn’t interrupted with the news that his SEAL Team was going to war as a result of 9/11. In actuality, Kyle knew before the wedding that he was going to be deployed and took advantage of a few days leave to get married and take a quick honeymoon.

A major scene in the film shows Kyle killing both a boy and his mother as they attempt to throw a grenade at approaching Marines. The reality of the situation was different. He did kill a woman that day and she was trying to throw a grenade at Marines, but he did not kill a boy. That was total fiction.

In the film, Kyle seems to be a little bothered by his first kills. Fictional Kyle said, “That’s not how I expected it to go down.” The real Chris Kyle looked at that day a bit differently, he was not distressed by the killing. He later wrote, “It was my duty to shoot, and I don’t regret it.”

Another part of the film that differed significantly from reality was the storyline involving fellow SEAL Ryan Job aka Biggles. Job was indeed blinded when an enemy sniper round hit the feed tray cover of his weapon and the round fragmented, going deep into his skull.

In reality, Job had numerous surgeries over time, was discharged from the Navy and got married. He attended and graduated from college and was about to begin a career when he died from a medical error following facial reconstruction surgery. His wife was pregnant at the time.

The film has Biggles dying on the operating table shortly after he is wounded. This infuriates fictional Kyle and launches him into action to find his assumed killer, the infamous Syrian sniper Mustafa.

Thing is, in reality, there was no Mustafa. He was a composite character put together from multiple Iraqi snipers.

I enjoyed American Sniper, but I caution people to watch it knowing that the film certainly is not exactly true to life.