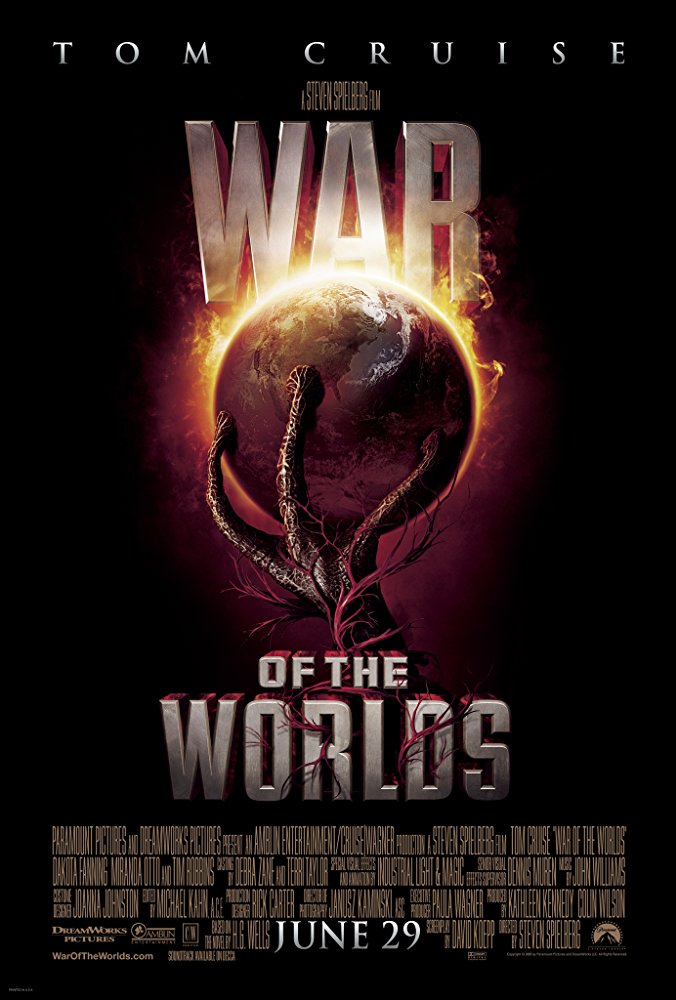 The Earth is invaded by GoPros on tripods. Tom Cruise’s toe fungus saves the World.

When I was young, a science fiction fan had to find his fix of quality SF in magazines like Galaxy, If and Analogue, or paperbacks from Ace. The screen was largely a desert for science fiction. Oh, you had things like The Thing, The Day the Earth Stood Still, and Forbidden Planet. 2001. Some of the science fiction films were B films, while most were C- or D.

Television offered The Twilight Zone, Outer Limits, and Star Trek, which was of uneven quality. Limits and Trek both used a story by a real science fiction writer, Fredric Brown, with Arena. Harlan Ellison provided The Demon with the Glass Hand for Limits and The City on the Edge of Forever on Trek. Both memorable. Then Hugo winning author Theodore Sturgeon, with his unique brand of humor, wrote a Star Trek which reduced Vulcans to canine like beasts at the mercy of seasonal mating urges, with the introduction of pon farr. Spock runs amok enthralled by a irresistible mating urge. You can only wonder what sort of evolution produced that one.

Hollywood saw the golden light with the release of Star Wars in 1977. A delightful mix of Asimov’s Foundation, Frank Herbert’s Dune, Doc Smith and his Lensmen, with a dash of Robert Heinlein’s mentor/acolyte thrown in for good measure. For reasons that escape me, Close Encounters of the Third Kind was a success. It was about extraterrestrials who harass airliners, steal Navy aircraft and ocean going ships, kidnap people and hold them for decades, even taking a young child from his mother’s arms, and yet are regarded as good guys?

After eviscerating Philip K. Dick’s short story, Minority Report on his butcher’s block, Steven Spielberg set about to offer the same type plastic surgery to H.G. Welles’, The War of the Worlds.

A Fabian Socialist, H.G. Welles saw the dehumanizing effects of Imperialism. It promotes the assumption technologically inferior societies are morally and ethically inferior and not worthy of respect. Or existence.

The opening chapter of War of the Worlds is a comment on the coming of the Martians. The war is over, the invaders defeated, however the results of the conflict remain.

The unnamed narrator tells the reader:

And before we judge of them too harshly we must remember what ruthless and utter destruction our own species has wrought, not only upon animals, such as the vanished bison and the dodo, but upon its inferior races. The Tasmanians, in spite of their human likeness, were entirely swept out of existence in a war of extermination waged by European immigrants, in the space of fifty years. Are we such apostles of mercy as to complain if the Martians warred in the same spirit?

In Steven Spielberg’s 2005 version of the story, we are introduced to Tom Cruise as Ray Ferrier, a crane operator longshoreman. The only operator in port who has the skill and ability to stack three, count ’em three, cargo containers. The skill and ability has no use or application in the rest of the story, although it proved someone connected with the show could stack it really high.

Ray is a regular Joe, the kind of guy you meet for a beer after work and watch the game. The kind of guy who is rebuilding a car engine on his kitchen table ( establishing him as a mechanic, a skill he will need in the second reel). You suspect this kind of thing is the reason Ray’s wife divorced him.

Then the real nightmare begins. Ray’s very pregnant ex and her current hubby arrive to drop off the product of the marriage, two revolting children, consisting of a dim-witted and surly teenage boy, and whiny ten years old girl. The ex is on the way to Boston to visit her parents, and for some reason the old folks do not want to see their grandchildren, or mom does not want endure the unpleasant youngsters during the long drive from New Jersey to staid Boston. It is a vapid plot device to make another reunite-the-family film as part of psychological therapy for the filmmaker. Beats Family Court. I guess.

After a long shift of stacking high the containers, Ray takes a nap. While asleep, the girl orders take-out from a health food restaurant, and the surly teen steals Ray’s car, presumably because Ray is a bad parent, although not so bad he would dump the kids on a thoughtless babysitter I might assume.

In many of Spielberg’s films, there is no why, only is. Don’t think about why a mother would dump her children on a neglectful parent, only that it continues an absurd story.

Storm clouds are brewin’. Ray demands the thieving son play backyard catch under a darkening sky as a bonding experience. The girl panics.

Ray witnesses the street near a church erupt and a ET fighting machine emerges like a newborn child. A tripod! A walking tripod! After emitting a heavy duty menacing mechanical growl, it pulls a ray gun and zaps people into a cloud of dust. No streak of light or a Hi Ho Silver!

The novel takes a more laid back and leisurely approach. An astronomer friend of the narrator, Ogilvy, invites him to his observatory to see evidence of explosions on Mars, now at it’s closest approach. Very interesting, Professor, I wonder just what it could be?

A short time later a cylinder impacts close by and the curious flock to see what it could be. A falling star? Is it related to the Martian explosions? As soon as it cools, a screw-top opens and a delegation of the friendly approach it with a sign reading, “Welcome to Muswell Hill.” Just proud to be Muswell hillbillies…

Misunderstanding the “Welcome Martians” banner the hill folk were holding, the Martians incinerated them, including Ogilvy.

This being the laid back Victorian Era, panic was late in coming, but when it does, the narrator requisitioned a dog cart and carried his wife to safety in Leatherhead. Yes, a place called Leatherhead. I have no idea if it is all all like Boston. In any case, no nasty children were involved.

Back at the ranch, Roy advises a local mechanic on how to cure a minivan of EMP, and then steals it moments before the hapless mechanic is vaporized, poor fellow. This is Spielberg morality at its finest. Any theft or villainy is permissible as long as it is to save family unity. Roy does not have milk in the fridge or healthy food in the larder, but by God he will save the the kiddies from a Martian invasion.

A race to the suburban house the the kids share with mom and the new hubby, where Roy frantically makes peanut butter and jelly sandwiches.

Sadly, the little girl is allergic to peanut butter, yet another personal fact Roy as Dad should have known. You might have thought Spielberg has made that point back in Jersey.

Crash, bang, everyone into the cellar hider hole to endure the nocturnal battle outside. Next morning Roy emerges to find a 747 crashed outside the house and a TV camera crew complete with girl reporter looting the wreckage.

This is where we learn the details of the invasion. It seems the ET invaders have been up in the stratosphere just waiting to ride lightening bolts down into the ground, deep down to where the pre-positioned tripods have been lurking. They had been placed eons ago, even before the local Indian peoples might have noticed. There would have been like, oral histories and tales and legends had our Native American friends had even a hint of the subterranean menace. Dances and such.

Yes, we see them clearly on the reporter’s video riding the lightening into the ground, like witches riding a broom. Not a Star Trek transporter. They do not beam in. Wherever they call home, it is not Mars. It is Cloud Cuckoo Land, where some directors and their writers look down upon their audience with amused contempt.

Now Ray decides it is high time the kids follow mom to Boston.

From then on the film story follows the novel with some adjustment for the backward children and modern inventions. The torpedo boat Thunder Child becomes a ferry full of panicked humans in the film, all packaged for easy destruction by the ETs.

We have a bit of luck then the son runs off to join the army. Absent from the action until the final scene. However, we are still left with the girl, giving Ray a excuse to murder someone to save her.

After disastrous counterattack by our forces against the tripods, Ray and girl take refuge with a kook named Ogilvy in the cellar of his house. The astronomer Ogilvy of the novel transformed to a raving lunatic in film.

The narrator of the novel takes refuge with a church curate, who flips out and the narrator knocks him out to quiet him. When the Ogilvy of the film is noisy, Ray beats him to death off camera in order to save the annoying kid.

Both the novel and the film stories end the same way. Our microscopic friends attack and kill the invader who had no resistance. Ray leads the girl to her mother and grandparents and surely son in Boston. The family united. Sniff.

The theme of the novel is to treat all peoples of the world as equals. As the High Lama in James Hilton’s Lost Horizon said, “Be kind to everyone”.

The them of the film is, lots of action and flashing lights. And big box office.