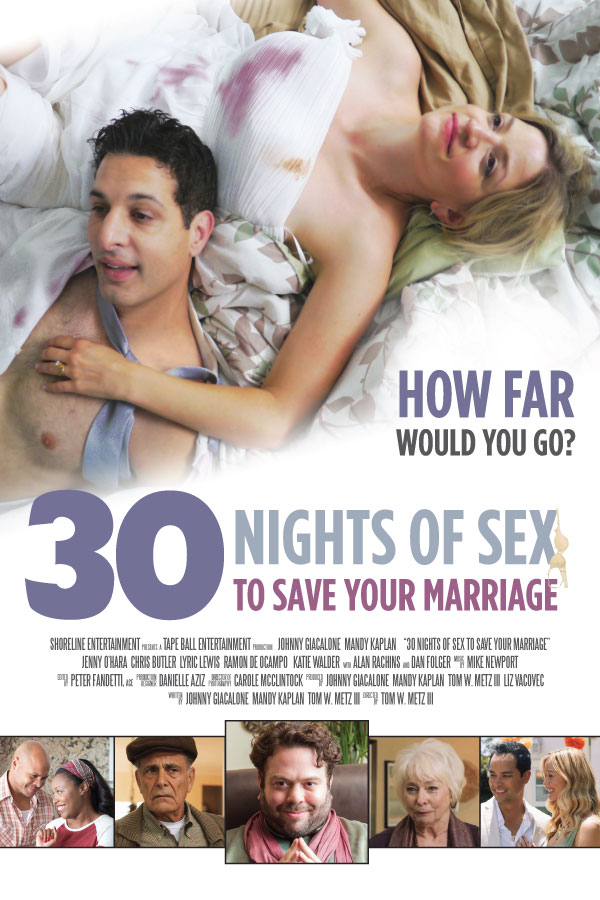 A desperate couple tries to save their marriage by implementing a bizarre 30-day plan. Much hilarity ensues.

I’ve said it before and will say it again, we really have some great fans and readers here at Ruthless. I was contacted by Mandy Kaplan, asking if I would screen and review her movie. I always look, because I have discovered some really outstanding Indie movies like The Road To The Well and Piranha Sharks. This time it was 30 Nights, co-written by Mandy Kaplan, Johnny Giacalone and Tom W. Metz. Mandy is a writer, an actress and comedian. What an actress she is! As always, I didn’t expect much, but was again pleasantly surprised by this hilarious movie.

Seven years after a steaming hot romance and wedding, we don’t have the 7 Year Itch, we have a 7 year niche. This rut was more like a crevasse filled with marital quicksand. Nick (Johnny Giacalone) and Willa (Mandy Kaplan) were a very successful married couple with one child, but the flame of passion was long gone. It was so far gone that they actually scheduled their infrequent sexual encounters and then went to extreme lengths to sabotage any possibility of intimacy. They both knew that the marriage was in trouble, and reluctantly decided to do something about it.

With the urging of their best friends Dave and Stacey, who also were a struggling marital couple, they consented to try therapy. Dr. Lance Ying was a marriage counseling guru with highly effective, but unconventional methods. The good doctor had a plan, a 30-day plan, that required coitus every night, with increasing difficulty (translated: kinkiness). This plan, if followed,was guaranteed to salvage the rocky marriage.

Skeptical and paranoid at first, this dysfunctional couple eventually sent their brat to the Grandparents, and went all in with the 30 day therapy. The journey through the calendar was delicious and hilarious. Inhibitions were peeled away as this couple rediscovered themselves and each other.

The pacing and editing of this movie during the 30 day ordeal of sexual frolicking was a real pleasure to watch. The acting by the two leads was magnificent and there was not a bit of wasted air in this film. Johnny Giacalone and Mandy Kaplan were the ideal dysfunctional married duo. I am hard-pressed to recall a couple that was more passionate and dedicated to saving their marriage, in spite of their glaring flaws. What could have been a familial disaster and divorce was turned into a rocking good time for both the struggling lovers and the viewing audience.

30 Nights also had a fine supporting cast of in-laws, siblings and well-meaning friends. Especially effective was Jenny O’Hara, who played Wilma and Megan’s (Katie Walder) tell it all mother. Rounding out the cast was Dan Fogler as Dr. Lance Ying, who looked more like a voodoo doctor than a marriage counselor. This raucous comedy will soon be released to Amazon Prime for your viewing pleasure. Don’t miss it.

Goatesians Rating of 7.5/10.0 with the Seal Of Approval for a Family Values Film