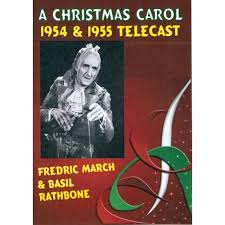 An unwatchable version of the Dickens classic

This rendition is hands down the very worst adaption of this classic I have ever watched. The make-up was hideous, and in spite of stars like Fredric March and Basil Rathbone, the acting was completely uninspired. This version was only 51 minutes long, but it seemed like an eternity. Oh, and it is a musical, too, with the most ear-insulting caterwauling I have ever heard. Every time they started singing, I hit the mute button.

This version is obscure and hard to find, and for good reason. It was the laziest effort I have ever seen. The story line was not even followed as Scrooge ended up at Cratchit’s house for Christmas dinner, not at his nephew Fred’s. I guess so there could be one more assault on our eardrums. The movie ended with Scrooge just sitting there at the table with the most laughable prosthetic nose ever botched by a make-up department. (See picture above) I suppressed a guffaw as I realized this was the very best thing about this awful, awful assault on this Charles Dickens masterpiece.