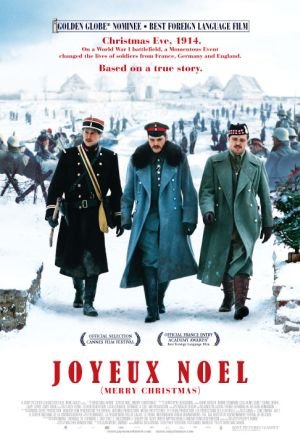 Based on actual events, soldiers put down their weapons in a spontaneous Christmas truce during WW1

Everyone pretty much agrees that war sucks and that the job of the military is to kill people and break things. Sometimes war can be averted, and other times it is inevitable, justified and unavoidable. Although not as deadly as WW2, WW1 had its share of horror and misery, and those soldiers that were thrust into this morass of death and decay quickly realized that it was not the cakewalk that they were led to believe.

Joyeux Noel is a Christmas Movie that I have been aware of, but I had not been particularly motivated to watch. To be honest, I was pretty much underwhelmed by my perception of this movie, a movie that has a simple premise and was based on actual events. Boy, was I ever wrong.

The story this movie presented was as simple as it was ironic. During WW1 the warring nations engaged in trench warfare. I don’t know whose idea this was, but it was a terrible idea for health and morale, not that much about war is good for your health if you are a soldier. Anyway, on Christmas Eve both the Triple Entente and the Triple Alliance decided to lay down their weapons, get drunk and exchange pleasantries, instead of trying to blow each other to smithereens.

The acting in this movie was magnificent, and I am hard pressed to envision a more gorgeous couple than Anna and Nikolaus (Diane Kruger and Benno Furmann). As a soldier, he returns to the front line, but Anna accompanies him, determined to bring a recital to the war. It is their stunning voices, soaring above the death and horror of ‘No Man’s Land’ that initiates the spontaneous truce on the eve of the Savior’s birth.

What happened next was pretty magical. As the tenor Nickolaus burst into Silent Night all of the animosities of war melted away. The soldiers abandoned their trenches and weapons to fraternize with the enemy who had only hours before tried their best to maim and kill them. But wouldn’t you know that it is a cat that really breaks the ice.

This truce was heartwarming, but Christian Carion never abandoned the stark reality of the horror that was this war. The band-aid that was the moving religious mass at the truce, was unceremoniously jerked back to reality by the horrific sermon by Ian Richardson, charging all of the Triple Entente to wipe the Huns off the face of the earth. This was Old Testament stuff here.

Christ came “not with Peace but with a sword”; that these Godless Germans should be cut down, every man, woman and child. -Ian Richardson as L’eveque Anglais

This is a stark reminder of The Church’s culpability and influence in both of the great World Wars. The irony is as tragic as it is exquisite. The very concepts that foment the conflict serve to bring the carnage to a halt, if so very temporary. They extend the truce on Christmas Day in order to bury their dead. Again, the irony is devastating.

This movie has achieved the near-impossible by showing the very best and worst of mankind all within the same frame. The French, Scottish and German troops partake in a moving event that interrupts the continuity of the bitter Hell of war.

It is hard to imagine not being touched by this excellent film. It has motivated me to research the history of WW1 and as I alluded to earlier, some wars are quite avoidable and unnecessary. WW 1 was one of these wars. It is devastating to study history and realize the tragedy of this colossal world event. I highly recommend this movie.

9.0/10.0 With The Goatesians Rating Of Must Watch for Christmas and History Buffs.