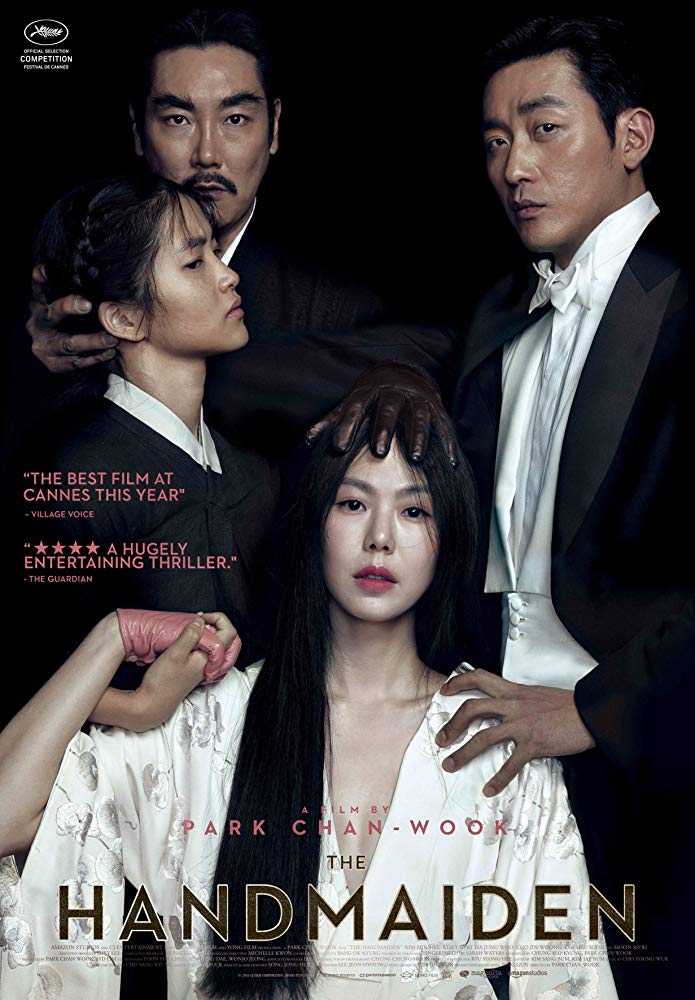 Some scoundrels attempt to relieve a wealthy woman of her fortune. Things get complicated.

The Handmaiden is a movie made by Chan-Wook Park, the filmmaker who gave us the thrilling masterpiece trilogy, Oldboy (2003), Sympathy For Mr. Vengeance and Lady Vengeance. This movie is an adaptation of Sarah Water’s Victorian tale, Fingersmith. The plot is set in 1930’s Korea, while still under the pre-war occupation of Japan. The Handmaiden was the winner of 65 unique film awards, including the Austin Film Critics Association “Best Film of the Decade”. Unlike Parasite, this magnificent film was not given the time of day from the Hollywood Academy Awards. It is a 2.5 hour long Korean film with subtitles, so 99.9% of Americans will never be aware of its existence.

If you watched and loved the 2020 Best Film, Parasite, you will immediately recognize a familiar set up in The Handmaiden. We have yet another group of scoundrels poised to play the masquerade game, and take advantage of the ultra-rich. This movie is divided into three acts, each act is told from the perspective of a different character(s), not unlike Kurosawa’s Rashomon. By the time you emerge from the red herrings, the head fakes and blind alleys, you will be amazed at the exhilarating ride. This movie is exquisitely erotic, horribly gruesome, but with some of the most beautiful costumes and cinematography you will ever see on the screen.

I will avoid Major Spoilers beyond the 1st Act, but in order to adequately write a movie review, some background must be laid. Most of the film takes place at a stunning mansion that is part Victorian, part Korean and part Japanese. Lady Hideko (Min-He Kim) who is an extremely wealthy woman, is held as a virtual prisoner in the mansion by her dominating and porno-loving Uncle Kouzookie (Jin-woong-cho).

If I revealed anymore about this relationship, we would get into major 2nd and 3rd Act spoilers. The Uncle has summoned Sook-Hee (Tae-ri Kim) to be a handmaiden and companion for the squirrelly Lady Hideko. Sook-Hee is in collusion with Count Fujiwara (Jung-woo Ha), as a fellow scoundrel, thief and pickpocket, and the Count has been recruited by Uncle Kouzookie to woo and marry Lady Hideko. Sook-Hee’s role is to get close to Lady Hideko and steer her to a romance with The Count. After the marriage, the plan is to have Lady Hideko committed to a mental institution, and make off with her wealth.

Just when you think you might have a handle on WTF is going on in this gorgeous and spellbinding movie, the 2nd act kicks in and the film rewinds events, Tarantino style, shifting gears to the perspective of Lady Hideko. Needless to say, there are twists, turns, back-pedaling and double crosses on the way to the 3rd and climactic final act. Everyone has designs on the massive fortune, including Lady Hideko, who wants to hang on to it rather than to let her kinky-ass uncle get his hands on it. Yes, who is going to do what to whom, and how? Oh, my.

The plot is both beautifully and maddeningly complicated, and becomes even more so when Lady Hideko and Sook-Hee start to develop feelings for each other. Much like Portrait of a Lady On Fire, the attraction is quite subtle at first, but again, you just think you know what is coming. I will say that if you are a Puritan, or religiously and sexually impaired, this film might make you a bit uncomfortable. Again, I may have said too much. Regardless, as explicit as some things are, Chan-Wook does not rub your nose in his craft and skill. For genuine cinema lovers, you will drink it in and wish for more.

Boy, what a good-looking movie this is! The bar is always set high for Korean movies, and after Parasite, I thought that I would never need to touch that bar again. After The Handmaiden? I’m not so sure anymore. I have now seen 5 of Chan-wook Park’s movies and this one is clearly the best. The costumes, makeup, hairdo, setting and cinematography provide a lush vision of the 1930’s era in Korea.

The acting is stunning and beyond passionate, and oh boy, that mansion! The storytelling by Park is hypnotizing, and in spite of the length of the movie, the audience’s attention will never waver. The sexual scenes are just about as explicit as you can possibly get, but nevertheless, they just exude tenderness and love. I can’t think of a single negative thing to write about this spellbinding film, not even the ending, as the audience never wants this masterpiece to end. It was skillful and meticulous film-making at its best.

This great movie is available on Amazon Prime.

10.0/10.0 With the continuing Awe of Excellence for Korean films.