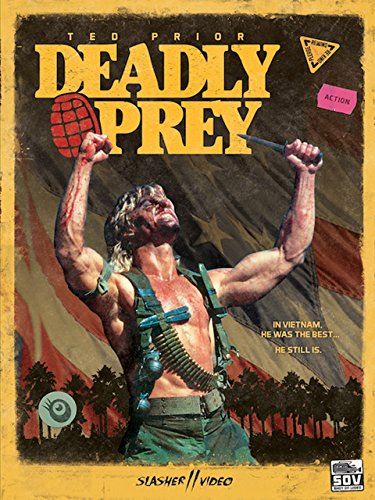 Sadistic mercenaries kidnap people off the streets and release them at their secret camp. Much death and hilarity ensues.

In Vietnam He Was The Best… HE STILL IS!

I am probably the first person in history to ever take notes on this particular movie, and no fewer than four pages of those notes begin with the headline: “Homoeroticism (Cont’d).’ In many ways, Deadly Prey resembles the classic standard-bearer Commando (released only two years before), and in no area is this more evident than in their shared brand of smoldering, hostile man-love.

Our introduction to our hero, Mike Danton (Ted Prior, brother of writer-director David A. Prior), is strikingly similar to that of Schwarzenegger’s John Matrix in Commando, with an Adonis-like male figure carrying a phallic object through the rugged wilderness. In Deadly Prey it is a mere assault rifle, while Matrix carries an entire tree on his burly shoulder in Commando, and unlike the full-on beefcake shots that begin that fine film, Danton’s physique is obscured in cock-teasing silhouette for the moment.

Not for long, though, as minutes after being abducted by the bad guys Danton is “forced” to shed the baggy sweatshirt obscuring his inexplicably glistening pecs and abs in the opening scenes, and is now gloriously nude but for the tiny cutoff jean shorts he wears almost exclusively for the rest of the movie. You might think the fact that he was filming his own brother would deter director Prior from overly sexualizing his male lead’s physique in the classic ’80s Action manner, but you would be wrong.

Both Danton and Colonel Hogan (David Campbell), the Bennett to Danton’s Matrix, are ostensibly involved with women (Danton is married, while Hogan is carrying on an affair with a female subordinate named Sybil), but it is clear from the start that they are just doomed broads in the way of the true love story at the heart of the movie. When Hogan sees the corpses of the first of his men to run afoul of Danton, he recognizes the style of his former protege immediately, and soon he is drinking and speaking wistfully to Sybil (Dawn Abraham) about Danton while looking off into the middle distance as (I shit you not) romantic music plays on the soundtrack. “I’d give anything to have twenty men just like him,” Hogan says, trailing off nearly to a whisper at the end.

Though Sybil is practically ignored in this scene, and Hogan shows no particular emotion over her inevitable death at Danton’s hands later on, he does again display troubling heterosexual tendencies when he rapes Danton’s wife, Jaimy (Suzzane Tara), in the third act. However, before he does, he explicitly states that he is doing it only in order to hurt Danton “more than he could ever hurt me,” so it is pretty safe to assume he is picturing Danton throughout the regrettable chore, as he undoubtedly has been for years in other encounters with women, consensual or otherwise.

“You know what I want,” Hogan says to Danton before their final confrontation. “I want you.” He hastens to add the word, “Dead,” to this confession of love, but no one in the audience is fooled as we enter the climactic showdown. Danton actually dons more clothing for this final stretch, but said clothing consists of a leather vest with bullets and grenades all over it and some very butch army pants, so you tell me. The last thing Danton does in the movie (after the greatest Novelty Death of them all; see below) is order Hogan to strip to his underwear and run, so the games have obviously just begun for these two muscle daddies.

A solid 60 confirmed onscreen deaths, with at least a dozen more possible-to-probables, one of whom is definitely at least paralyzed after Danton picks him up and wraps him around a tree back-first. The first death occurs within the first six minutes of the movie, with the second following less than two minutes later. After that, it gets hard to keep up at times. By the third act, you almost assume that every time you see Danton fire a gun, someone just died. Not nearly Commando-level carnage, but very respectable.

Technically pretty bad, I guess, if you want to be that way, but I love it with all my heart. Sure, it is full of cartoonish performances and much of the dialogue sounds like it was improvised by foul-mouthed children playing with G.I. Joes. Yes, a lot of the action scenes were shot in a large backyard and the lead actor has basically one-and-a-half facial expressions. On the other hand, it is one of the most hilariously entertaining movies I have ever seen, and above all, there is our hero, our Golden God with a mullet, Mike Danton. Just take a moment to chew on that name. Drink it in. That is the name of a man who, wearing nothing but a pair of impossibly small shorts, will lay waste to an entire army of your best men, just because he made a promise (to kill every last one of you). In other words, a true ’80s Action icon.

There are a ton of them, but they are almost all incredibly lame. This has its own perverse charm, though. Danton is a ruthlessly efficient killing machine who picks off Hogan’s men one by one during the first half of the movie, usually after something as simple as “You’re dead,” delivered with no inflection whatsoever. His enemies are equally uninspired, prefacing their kills with things like “You fucked up,” and “Bitch.”

There is a fun moment in which one of the many nameless henchmen wails in terror, “Christ, we’re not hunting him, he’s hunting us!” Hogan’s right-hand man, Thornton (Fritz Matthews), snarls back, “Suck this!” and shoots him in the face. Apparently, in this world, death is the punishment for being too on-the-nose.

The only really good one, though, belongs to Jaimy’s Father, Danton’s father-in-law (Cameron Mitchell), who asks one of Hogan’s men, “Friend or enemy?” “I’m a friend,” the hapless recruit replies. “You’re a liar,” the old man retorts, and guns him down.

Almost all are of the pre-mortem variety, but there is one good zinger from Danton’s ally in the third act, Jack Cooper (William Zipp), after he leaves another of Hogan’s nameless henchmen unconscious with a live grenade as a pillow, the pulled pin ringed around his middle finger. After the inevitable happens, Danton asks of the explosion in the background, “What the hell was that?” Cooper replies, “It’s my calling card.”

Fairly vague and simplistic, painted in broad strokes. Hogan is training his elite mercenaries for use “overseas” at the behest of unnamed “millionaires” and “dictators.” Danton believes in the nobility of the US military and calls Hogan out on his acceptance of “blood money.” “It’s all green,” Hogan replies.

There is a proper vigilante angle in the character of Jaimy’s Father, a retired cop. Jaimy goes to him after Danton is abducted, rather than calling the police, because as we all know, the lone vigilante is our best and only hope as a society. Indeed, it is he who takes down the Big Bad, Don Michaelson (Troy Donahue), the millionaire businessman on whose behalf Hogan is training his mercenary army, but not before giving a long-winded, surprisingly poetic speech about being a “little man who spent 27 years of his life as a cop trying to put bigshots like [Michaelson] away. 27 years in the filth, in the dirt of the streets, and there ain’t no music down there.” Of course, all this poetry eventually gives way to the underwhelming Pre-Mortem One-Liner “Die, you sonofabitch,” because this is Deadly Prey, goddammit, not Shakespeare!

In a way, this is the role Michaelson fills, at least to Hogan. He is the suit demanding Hogan have his army trained in one month rather than the three Hogan insists he needs, and he continually hassles Hogan every chance he gets, even though Hogan gets results, dammit. Though Jaimy’s Father (he has no other name, as far as I can tell) only manages to add two kills to the impressive Corpse Count, the fact that Michaelson is the first of these makes him a hero to both sides of the Danton-Hogan conflict/love affair.

Like the Pre-Mortem One-Liners, the methods of murder are pretty by the numbers in the first half of the movie, with Danton’s M.O. revolving around creeping up behind the last unlucky slob in a troop of mercenaries, pulling him into a secluded spot and stabbing him after looking deep into his eyes and whispering sweet nothings like “You’re dead” into his ear. However, the Novelty Deaths really start to pile up in the final half-hour.

There are a few good grenade-related ones, the best of which has Danton stuffing a live one down the pants of a large goon he has been grappling with, leaving only a smoking boot behind after the explosion. Then we are treated to a short montage of rope-and-stick-based traps Danton has set in the woods, one of which catches a dude square in the nuts, another in the throat. Soon after, another goon wises up and catches one of Danton’s sharpened stick traps midair with one quick hand, but while he is busy grinning over this small victory, he realizes too late that the trap triggered a nearby grenade as well! Mike Danton, you magnificent bastard….

By far the best, though, and wisely saved for last, is Danton’s final onscreen kill. After Thornton kills Jaimy right before his eyes, Danton runs straight into a hail of Thornton’s bullets (the power of his vengeful rage apparently shielding him from even the slightest wound), cuts off Thornton’s arm with a machete, and proceeds to beat the man to death with his own severed arm. He then takes Thornton’s scalp as a token of his affection for Hogan. It may be simultaneously the greatest Novelty Death in any action movie, and the sweetest romantic gesture these jaded eyes have ever seen.

No, presumably due to budgetary constraints. However, that final Novelty Death more than makes up for the absence.

Always wear jean shorts to bed, as you never know when you may be abducted by mercenaries and forced to fight for your life in the jungles of… Los Angeles.

As is ’80s Action tradition, women both virtuous and evil exist solely to be either rescued or violently dispatched in service of the final showdown between the men. The virtuous are no more likely to survive than the evil, though they have a significantly lower chance of going un-raped before their gruesome demise.

If a one-man army has already brutally murdered a few dozen of the other recruits in your mercenary training club, perhaps it is not the best idea to put down your guns and insist on hand-to-hand combat when you encounter him.