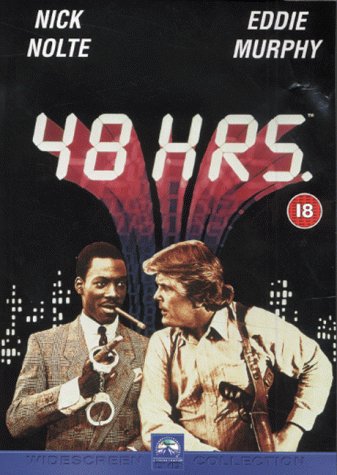 Eddie Murphy was only 19 years old when he was tagged to play the convict conscripted by Jack, a renegade and reckless cop in San Francisco. Jack always stayed just a half a step ahead of losing his badge, and Reggie wanted to get out of jail. Even though Reggie Hammond was not a cop, his unforgettable performance was the original “buddy cop” formula that spawned many other successful movies like the Lethal Weapon franchise and Men In Black.

The boys are back in town

It was pretty low. Two cops at the beginning, one bad guy on the bus, and the two cop killers at the end.

Not that novel, but Jack nonchalantly shot Ganz while he was holding Reggie as a human shield with a gun to his head.

48 Hours was really good. It was predictable that it was a yawner for most professional reviewers, but Ebert liked it and gave it 3.5/4.0 stars. The plot was routine, but the acting was superb as Nolte and Murphy played off each other brilliantly. Both men grudgingly developed respect for each other as they teamed up for a common goal. The two villains, Ganz and Billy Bear were pretty terrifying and David Patrick Kelley was perfect as the gang toadie. It was a rough, gritty, but enjoyable ride, with not a bit of political correctness in sight.

He was stupid furious with both Jack and his convict partner. Frank McRae, a former NFL player from Memphis played the outraged Chief Haden to the hilt. There was one scene at the station where he gave Jack and Reggie such a blistering dressing-down that I thought the paint would peel off the walls.

“You’re done, end of story” – Jack, blowing Ganz away in a hail of bullets

“Are you crazy, man! I was just bluffing!” -Reggie, after Jack shoots Ganz, who was using Reggie as a human shield

Other Quotes and one-liners:

In one of the most entertaining scenes in the movie, Reggie impersonates a cop at an over the top Redneck Bar and totally wrecks the place and intimidates everyone in a cowboy hat. Otherwise, there was no annoying PC or snowflake action to clutter up this great 80’s Action thriller.

No, Reggie and Jack just drive away into the sunset

What I Learned From 48 Hours:

Nick Nolte was magnificent back in his day, and there could have hardly been a better debut for Eddie Murphy. For it’s time, this was an under-rated and groundbreaking movie that is quite re-watchable. I learned that even back in the 80’s, Rednecks were scared of black men wearing suits.