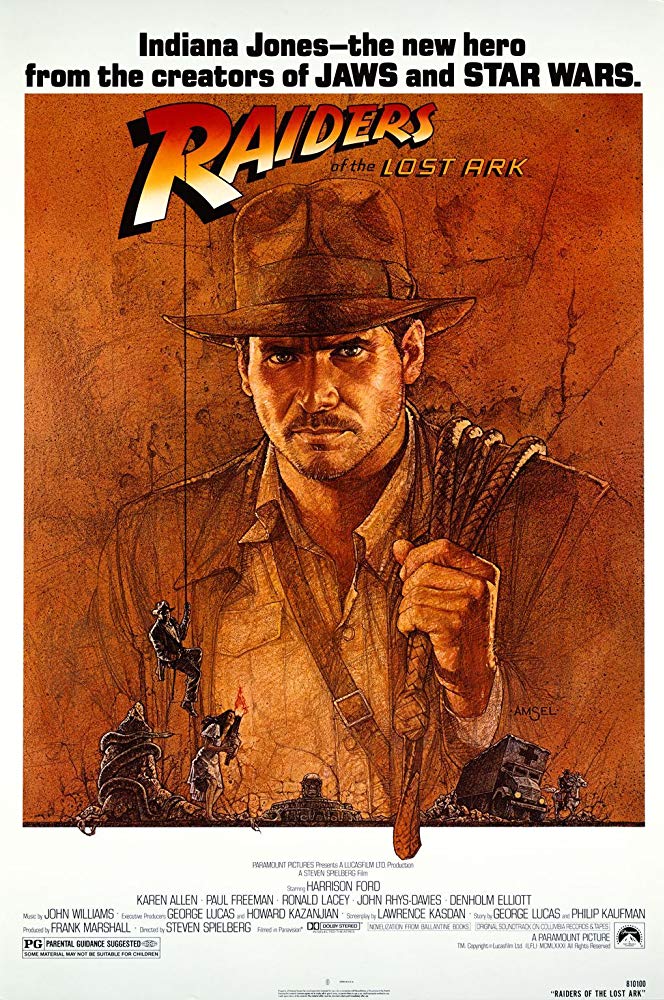 The Return of the Great Adventure.

Indiana Jones hates snakes, and Nazis. In that order.

Basically nonexistent, I am sorry to report. There are a lot of natives dressed only in leather thongs chasing Indy (Harrison Ford) at the beginning, after he steals the idol from the temple, but it feels much more casually racist than homoerotic. Throughout the film, Indy shows a disturbingly consistent tendency toward attraction to women, from his flirtatious students to his undeniable chemistry with Marion (Karen Allen). He fails even to exchange smoldering glances with his rivals or smoke cigars.

The movie makers show a similar disinterest in hot man-on-man action. In one scene the camera actually gives a token PG-rated ogle of Marion’s topless back as she changes, which is more than it ever gives us of Indy. He is certainly a paragon of rugged masculinity, but there is a notable dearth of true beefcake shots. He is shirtless in one scene at the top of the third act, but it is in service of an all too convincing love scene with Marion.

On the other hand, he does fall asleep while she is kissing him…

Barely manages to stagger up to 20 until the end, when another 20-30 Nazis are struck down for a respectable total count of around 50. This is nearly doubled if you count all the corpses that were killed long before the movie begins, like the dozens in the snake pit temple with Indy and Marion. Indy is only directly responsible for a meager eight or so of these, a number easily matched by his female counterpart. Indy himself has easily twice as many knockouts as kills, as he is much more of a punch a guy and maybe steal his Nazi uniform type than a true Warrior of the Gun. His favorite weapon, the bullwhip, would be extremely brutal if used lethally, but he employs it for self-defense and cool tricks instead.

It is a very good movie, to be sure, but as 80s Action it leaves much to be desired, particularly in the Homoeroticism and One-Liner departments. The Novelty Deaths are on point, but Indy is not usually responsible, nor prone to hilarious quips before or afterward. The Corpse Count ends up being quite respectable by the end, but Indy is a different breed of 80’s Action hero from your Johns Matrix and Rambo, or your Mike Dantons. He seems not to relish the bloodshed or the sweaty man-on-man savagery as much as he should.

Really, it is just the simple fact that, while Raiders is certainly an action movie that was released in the 1980’s, it was never meant to be what we know and love as an 80s Action movie. It is more a pastiche of what 1940s Hollywood adventure serials might have been like given the budgets and star power of A-list features. The second film in the series, Temple of Doom, probably comes closest to the platonic ideal of 80’s Action.

Indy is quick-witted, of course, but none of his best quips are delivered before or after a good kill. As mentioned before, he is more likely to let his enemies stab each other accidentally or be wiped out by the face-melting power of God than to do some honest killing and quipping of his own. The closest thing he has to a pre-mortem one-liner is actually three lines, and the potential kill is unfortunately interrupted by a bunch of adoring children again, Indy is a different breed of Action hero), but it is still pretty tough: “You want to talk to God? Let’s go see him together. I got nothing better to do.”

Our own Matt Cale covered this best in his excellent piece on the whole trilogy, Indiana Jones: Bullwhip for the White American Male. In brief, Indy represents American exceptionalism at its finest, his professional existence consisting mainly of stealing ancient artifacts and buried treasure for the good old U.S. of A and being chased by stereotypical savages for his troubles.

For (technically) an 80’s Action movie, though, Raiders comes off as almost feminist in its treatment of the character of Marion. Sure, Indy ultimately rescues her more than she returns the favor, but she is generally shown to be smarter, more capable, and a harder drinker than most men. This respect for women would be nowhere to be found by the time Temple of Doom came around.

The conscious political philosophy of Raiders actually boils down to a fairly simple “Nazis are bad,” which was a less contentious stand to take in 1981 than it is now, apparently. Between this and the feminist leanings, Indy would undoubtedly be branded a Social Justice Warrior snowflake today.

‘A lot of the corpses in this one are already dead by the time they are onscreen, mostly in decaying skeleton form. One of these even has a fat, juicy snake slithering through its eye sockets. Pretty gnarly. The first guy Indy kills is inadvertently set on fire, so Indy shoots him in the head, basically to put him out of his misery, which is a pretty soft way for an 80s Action icon to start a killing spree.

Then there is the famous sword-twirler who puts on an exhibition of his skill only to be gunned down in one shot by an exasperated Indy. Fun fact: this was meant to be a proper fight between the two, but Ford was suffering from dysentery and unable to do much more than stand in place and fire a gun on the day they shot the scene. Thus was born one of the most memorable moments in a classic film.

The best, though, other than the face-melting conclusion (see below), has to be the big, bald guy who gets it from the airplane propeller. This probably counts as Marion’s kill, if anything, as she is in the cockpit at the time, though Indy does get beaten bloody boxing the burly bastard, so maybe they should share the credit.

Basically, though I suppose it is more of a righteous fire from the heavens thing than a true atomic blast. Not really worth quibbling, though, when there are so many Nazis getting their faces melted in one of the most grisly moments ever seen in a PG-rated movie. Side note: the PG-13 rating was created after Temple of Doom so that Spielberg could continue to show children monkey brains and still-beating hearts being pulled from chests, as well as indirectly allowing them to see the All-American violence of Red Dawn, the first movie to get the rating. Spielberg is one of our finest artists.

Snakes and Nazis are basically the same, and the best thing to do is set large groups of them on fire with whatever you have handy, be it a torch or the vengeful flames of an angry God.