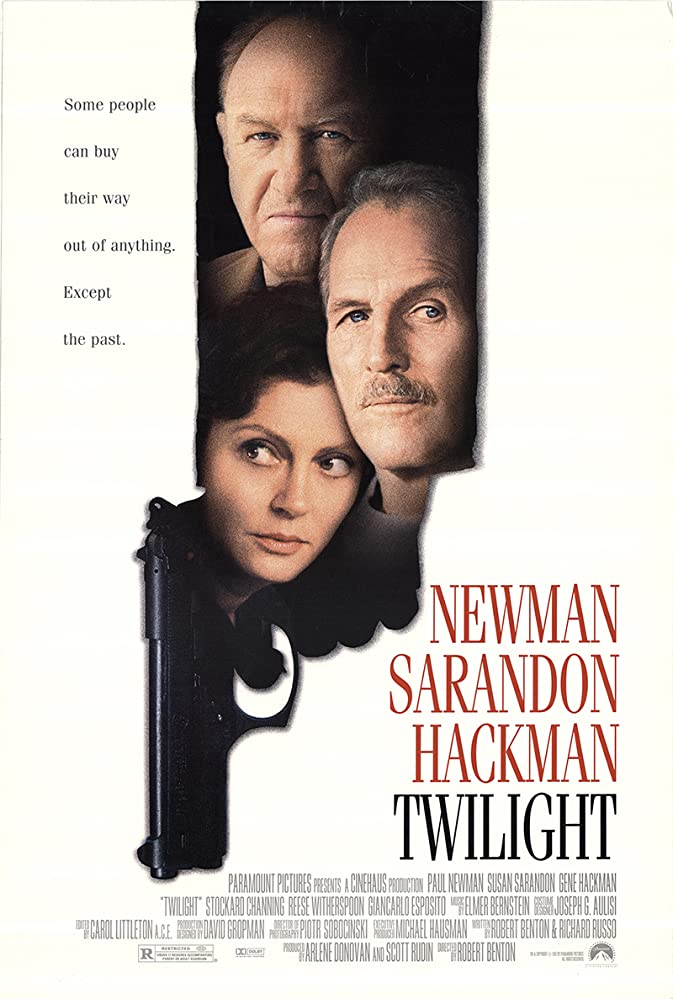 A retired and washed-up private eye accepts one last challenge

Harry Ross (Paul Newman) is an ex cop, ex P.I., ex drunk, who knows being a detective is a hell of a way to make a living. Robert Benton’s 1998 film noir, Twilight proves it. It becomes like a law of nature, especially when you get close to the beautiful people of Hollywood. Star power.

“Don’t you ever get tired of all the beautiful people, Harry? Doesn’t it ever bother you that they do whatever they want because there are people like you and me who’ll clean up after them?” asks ex cop and beautiful people’s Mister Fixit, Raymond Hope (James Garner).

As the picture opens, Harry Ross is in Mexico to a retrieve the daughter of a couple of declining movie stars. The only child of Jack Ames (Gene Hackman) and the glamorous Catherine (Susan Sarandon). They married twenty years ago, after the convenient disappearance of Catherine’s first husband, a wastrel, gambler, and prime example of a Hollywood user. Not a trace remains.

After decades of wealth and glamor, they are in the twilight of their careers as well as their finances. Jack is battling cancer. Prognosis, grim. The money is running out and their daughter, Mel (a perky Reese Witherspoon) has runoff with a bewildered looking Liev Schreiber as Jeff Willis.

Mel manages to get a hold of Harry’s Glock and bounce a round into his thigh, barely missing his femoral artery and his penis, engendering a cop rumor the bullet took his sex life with it.

Catherine and Jack get their girl back and have Willis tossed in jail. Crime school. The girl was seventeen, after-all. Crossing state lines is bad enough, but this was an international crossing. Harry is invited to recover from the GSW in a room over the garage at Casa Ames. Cheaper than Cedars.

However, there are lingering doubts as the disappearance and possible suicide of the lovely Catherine’s first husband. Someone may be in a position to exploit those doubts.

Harry is asked to deliver a fat envelope to a Big Blond at a fleabag apartment. The blond ain’t there, but the detective, now retired, who investigated the disappearance twenty years before is there to take a few shots at Harry with his dying breath. He is the key that to the caper that can no longer fit the lock.

The old cop’s death summons the appearance of LAPD’s own, Lt. Verna Hollander ( a very foxy Stockard Channing), Harry’s paramour from his cop days, now full of sympathy for his lost johnson and curiosity about just how and why of the demise of a former member of the force. Don’t lie to me, Harry.

Ray Hope has fond memories of the pre lieutenant Hollander.

“Tell Verna if she’s got the urge to hump an old man,

Jeff Willis puts another appearance, you knew he would, along with an appearance by the Big Blond (appearance being the word of the day, here).

What’s next is a path following the money on a journey sometimes violent, to what may be the truth of every Hollywood saga. The romance of illusions.

Who knows more than he is telling? Who wouldn’t tell you if she knew. Would Harry believe it anyway? Would you?

Just what did happen to husband number one???

Director Robert Benton (who gave us the delightful Art Carney/Lily Tomlin noir/comedy, 1977s The Late Show ), gives us a noir feeling in the 90s long after you were told of its death in the 50s (fooled ya), and cinematographer Piotr Sobocinski gives us the look; and in color!

There is plenty of snappy dialogue, enough to please even the most jaded of jaded of you.

“He shot 12 guys with a six-shot revolver. I ain’t arguing with that kind of marksmanship.”

Not in Hollywood, anyway.