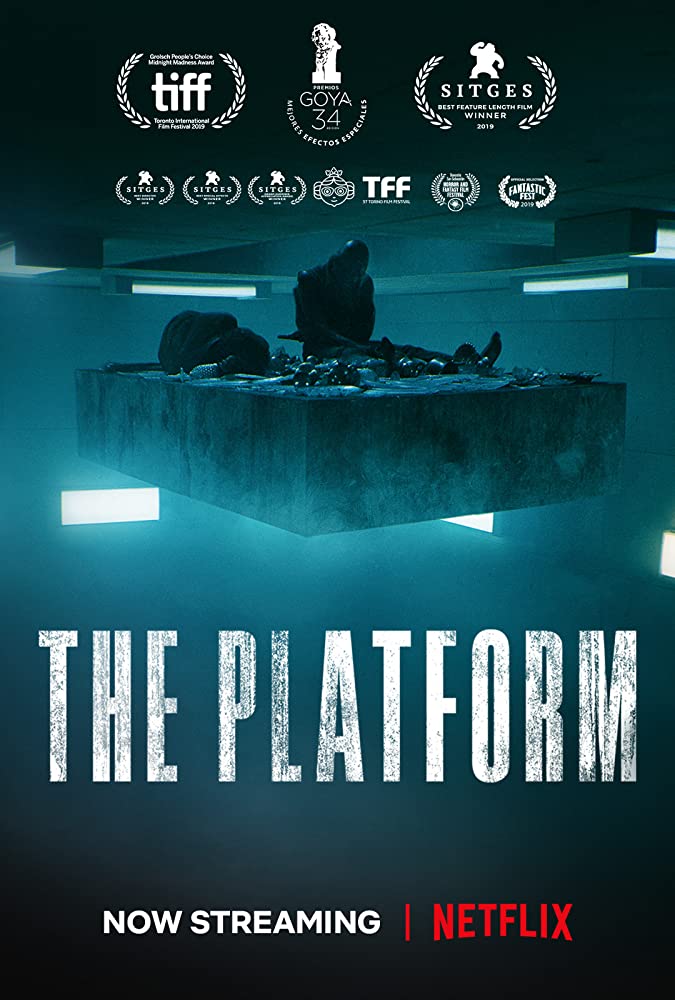 In The Hole, it’s not what you eat, but who you eat

In most of the incarceration movies I have watched, food is one of the high water marks of the day. Convicts march to the chow hall, get their individual trays and portions, and sit and eat with their race or gangs. If they are in isolation or the hole, unit-dose trays of food are brought to each individual cell. Food is important, especially the goodies that you might purchase at the commissary, for your own enjoyment. These snacks, whether they be honey buns or Cheetos, are precious cargo and guarded sometimes with your life.

Any modern day parent who has any sense knows that food should not be used as a punishment. “Go to bed without your supper” is so, like Oliver Twisty. In wartime, food (or lack of it) can be used as a potent weapon, hastening the end of an enemy’s will to fight. For all living creatures, including humans, food and sustenance is one of the most base primal instincts for survival.

The Platform is a movie…scratch that, this thing is not a movie, it’s a metaphorical nightmare. This nightmare is a Spanish movie directed by Galder Gaztelu-Urrutia and is available for streaming on Netflix. The original film was in Spanish with subtitles and the Netflix version has English dubbed in. Don’t worry. The dubbing is noticeable, but not too distracting as you have to deal with so much visual carnage and horror that you hardly notice it. I am going to lay some groundwork, but limit spoilers in case you want to be traumatized and watch this great movie.

The movie takes place in a vertical prison of 150+ (just wait!) levels. This is a unique prison in that some are incarcerated, some come here voluntarily. Each prisoner can take into his cell, one item only. It can be a samurai sword, a surfboard, a pet, a book, or a 454 block Chevy engine. There are two residents per cell, two cots, one sink, one toilet, a dingy mirror and concrete walls and floor. In the middle is a rectangular opening that facilitates the platform that delivers food to the prisoners once a day. A scrumptious buffet is meticulously prepared on Level 0 by professional chefs. The banquet is lowered starting at Level 1 and then proceeds downward. They can eat for two minutes and then the platform moves down to the next lower level. Food cannot be retained, only eaten, under the penalty of death.

The movie begins with our protagonist, Goreng (Ivan Massague) waking up and seeing his cell-mate, a dowdy-looking little old man named Trimagasi (Zorion Eguileor). He has been here for months, and is less than amiable. Goreng pries information out of him, bit by bit, but eventually his situation becomes quite obvious. They are on level 48, Trimagasi muses. This is good. Things can and probably will be much worse as the residents are moved to another level after one month. This shuffling is random (or is it?) and the lower you are in The Hole, the more horrible the conditions are. The higher the level, the sooner you get a shot at the food, and by the time the platform reaches triple-digit levels, there is NOTHING left.

Goreng recoils in horror as he sees the food platform for the first time. It contains the leftovers of 94 prisoners who have already eaten. There is still ample food, but the platform resembles a kill on the Serengeti, after the lions have eaten their fill, and the carrion experts have arrived. Trimagasi digs in with relish, almost giddy with his bounty. Goreng refuses to eat, but that will change. After a few days, they bond, they eat, and Goreng reads his book, Don Quixote to Trimagasi. You see, the book was what Goreng took with him into The Hole. Trimagasi? A Samurai knife that never needs sharpening. Soon their month is up, they are gassed into unconsciousness and are moved to another level. Here is where the horror begins.

I have watched and reviewed Snowpiercer and Cube, movies that on their own are horrifying enough. The Platform is another story altogether. Last year’s Best Picture, Parasite, showed vividly the plight of the haves and have nots; The Platform ramps up this concept to primal and nightmare levels. This movie peels away human selfishness and capitalism failure to its bare and bloody bones.

There *IS* plenty of food, but only if the primitive human nature is ameliorated by compassion, sharing, concern for the well-being of your fellow human beings. Well, good luck with that as in The Pit, as there is only Those Above, Those Below, and Those Who Jump. The balance of this film is horrific, mind-blowing and extremely hard to watch. I won’t dwell on the message, it is there for all to see. If history has taught us anything, it is that humans are a cruel and selfish species, carved out by evolution to be just a housing for the selfish gene, bent only on our own pinpoint myopia. It is who we are.

As I watched this horrifying movie, I was screaming inside, “Not Fair!” No one should have to endure such a test of the human condition. Upon reflection, however, I realize that THIS IS US. This is who we are and what we have become. Socialism or Capitalism, which for you? Our very capitalistic system is being ripped to shreds among a pandemic and fights over toilet paper at Wal-Mart.

Every attempt in this move at reason, at cooperation, at sharing the message that was so obvious, is obliterated by a hysteria of fear of the known and the unknown. Is it possible for humans to survive adversity in a planet of finite, but adequate, resources? I don’t know. As is graphically shown in this movie, chances are that the 1% will gorge on the bounty, oblivious and uncaring of those below. The people on the edges are terrified that they are just one cycle away from poverty, hunger, destitution and homelessness.

There is so much more to this movie that I have chosen to not spoil. The metaphors are deep and obvious. This is not a movie for the faint of heart, or those who will be bothered by plot holes and the ambiguous ending. The Platform hits home, and hits home hard. It is a well needed gut punch in today’s world.

With the Goatesians Rating of Just Don’t Watch UNLESS you care about the World around you.