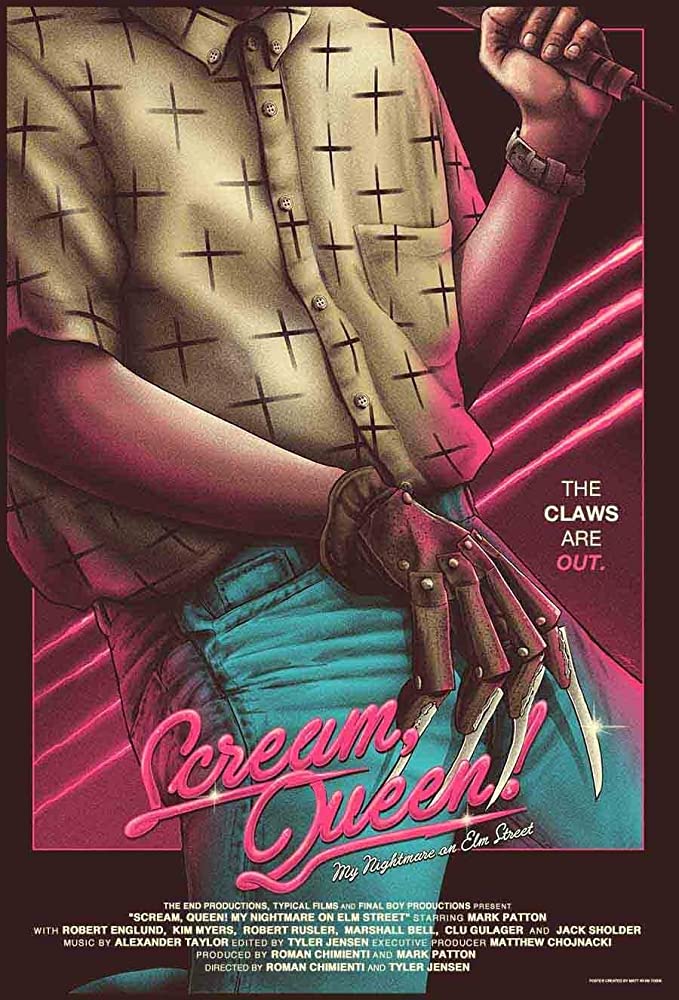 A Nightmare on Elm Street 2: Freddy’s Revenge rivals even Top Gun and Commando as the gayest movie of the 80s, and therefore of all time. While the glistening classics of 80s Action are awash in (perhaps) unintended homoeroticism, 80s horror movies such as Elm Street 2 and Sleepaway Camp have at the core of their terrors an overt homophobia, casting the homosexual, transgender, or otherwise non-conforming individual in the role of Other. This applies to horror movies outside the Reagan era as well (from Psycho to The Silence of the Lambs and beyond), but the AIDS epidemic and changing social attitudes that came from it and its mishandling by the Reagan administration created an atmosphere of fear that seeped into the movies of that time.

Elm Street 2 was released just a month after Rock Hudson died of AIDS, a momentous event that signaled a change in Hollywood, where a young Mark Patton seemed well on his way to becoming a bonafide movie star. Patton is the co-producer and protagonist of the new documentary Scream, Queen! My Nightmare on Elm Street. At 25 he had already had a successful run on Broadway in a major role and worked with Robert Altman, Kathy Bates, Cher, Sandy Dennis, and Karen Black, and there is even a clip of him punching a young George Clooney in the face in an episode of the 80s soap opera Hotel. Elm Street 2 was his first leading role and could have been the beginning of an extraordinary career, as the first film in the series was for Johnny Depp. Instead, Patton wound up quitting acting for nearly 30 years.

As the subtitle of the documentary, My Nightmare on Elm Street, indicates, this is Patton’s story, and it is one to which many a viewer can likely relate, as he explains his early realization that his problems growing up different in small-town Missouri were simply a matter of geography. He found something that felt like home in New York City, gaining great theatrical success in a short time, but in Hollywood he again encountered the pervasive homophobia from which he’d been trying to escape. In the wake of Hudson’s death, especially, there was tremendous pressure to remain in the closet as poor Rock had for his entire life. In other words, November 1985 was not an ideal time for the coronation of Hollywood’s first male Scream Queen.

Directors Roman Chimienti and Tyler Jensen show a clear love for the horror genre and especially the slasher sub-genre, with its Masked Killers, Scream Queens, and Final Girls. Interwoven with the story of Patton’s rise and fall in Hollywood is some insightful analysis from various interview subjects about the appeal of these sorts of movies to anyone who has felt persecuted for who they are. The Masked Killer represents the ultimate bully, and the Final Girl cathartically triumphs over him, if only until the sequel. This is key to the reevaluation of Elm Street 2 in the 21st century, and its embrace as a cult classic.

Upon its release, though, it was very poorly received, and generally considered the worst of the series for decades afterward. The brunt of the public ill-will fell on Patton, with director Jack Sholder claiming even to this day he had no idea how much gay subtext (or explicit text) was in his movie. Screenwriter David Chaskin went further, denying any intentional homoerotic subtext and implying that Patton had somehow added all of that to a movie that features a scene in a leather bar followed by a full-on, bare-assed, BDSM murder in a shower room. Chaskin later admitted to adding what was meant to be homophobic, rather than homoerotic, subtext to his script, but again accused Patton of removing all subtlety with his performance. Basically, the consensus was that Patton ruined the movie by being too gay, the result of which was a dead-end to his career as a leading man in a Hollywood that demanded someone who could at least “play straight” in that role.

Scream, Queen! follows Patton’s story through his many ups and downs: losing friends to AIDS and contracting HIV himself from a lover who subsequently died, quitting acting to become an interior decorator and moving to Mexico, and finally learning of the reversal of public attitudes toward his performance in Elm Street 2 and the movie as a whole, with horror fans LGBT or otherwise finally embracing the first male Final Girl / Scream Queen. Though he is far from a household name, Patton now enjoys some measure of the celebrity that seemed sure to be his 35 years ago, in the form of horror convention appearances and occasional movie roles, and he seems humble and happy.

With any autobiographical project such as this one, there is the risk of self-aggrandizing, or at least leaving out well-known incidents that might make the subject / producer look bad (ahem, Straight Outta Compton, ahem). Patton, however, displays a vulnerability and sincerity throughout that makes it easy to overlook the occasional vanity or need to be the center of attention any actor must necessarily possess. Some viewers may find this sort of project self-indulgent, but many more will find its story moving and inspiring, and Chimienti and Jensen’s sure-handed direction provides a strong narrative throughline in the conflict between Patton and Chaskin that keeps the viewer invested. If you are a member of the Nightmare on Elm Street 2 cult, as I am, it is of course a must-see.