Close Encounters Of The Third Kind (1977) 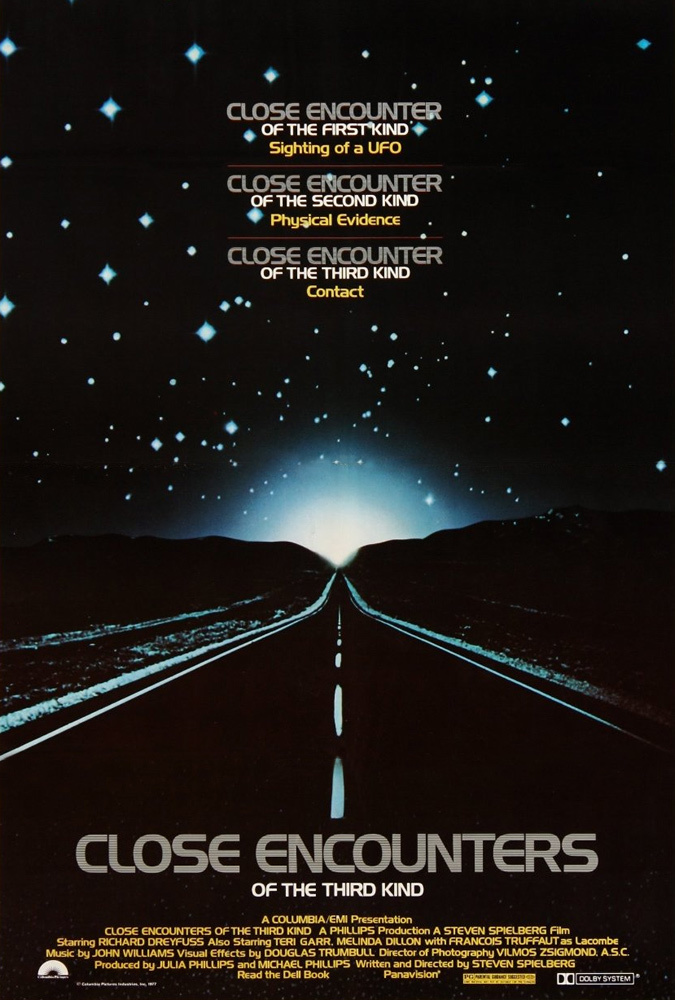 Close Encountes Of The Third Kind

The Aliens are coming for us and our mashed potatoes

It’s a shame Star Wars had to come out in 1977. Two great films were left in the shadows of its colossal reign at the international box office. The first was William Friedkin’s Sorcerer. The second was Steven Spielberg’s under looked gem; Close Encounters of the Third Kind.

Made right in the intensity of the Cold War, when America was facing a faceless enemy, Spielberg’s story of man’s relationship with the unknown and making peace with what we think is the enemy (aliens) is a direct analogy for the United States and their relationship with the Soviet Union. If we can talk to aliens, “why can’t we talk to the Soviets?” That’s essentially the question Spielberg is asking. It’s a theme that remains incredibly resonant. It’s a lesson that can be applied four decades later.

Besides Spielberg’s brilliant social commentary, his collaboration with John Williams hits their peak (on only their second collaboration. While Indiana Jones and Jaws have ringtone worthy scores that every living soul on the planet can point out, with Close Encounters, Williams’s score was essential to the script and plot. Williams was a part of the creation and storytelling process from the genesis of the project.

His short but beautiful theme, which the aliens use to contact other life forces, is used constantly throughout the movie and to sweepingly emotional effects during the film’s final half hour. The film tells the story of Roy Neary (Richard Dreyfuss), an everyday blue-collar worker in Indiana, whose life changes after an encounter with a UFO. From there, his family life changes drastically and he becomes more manic and distraught from his “close encounter”. He won’t stop till he uncovers the secrets that are going on in the government. On his path for the truth, he encounters Jillian (Melinda Dillon) a mother whose child has been taken by a UFO and Claude Lacombe, a French government scientist in charge of UFO-related activities in the United States.

Lacombe is played by legendary filmmaker Francois Truffaut in a truly amazing performance. Other than his own cameos or roles in his own films (Day for Night memorably comes to mind) Truffaut never acted in any of his peers films. Spielberg, a huge fan, offered the role to Truffaut and history was made. Dreyfuss, who plays a sort of unlikable hero in this film, is by far the standout. He’s hard to understand but plays the craziness well. Like Spielberg at his best, the film is a thrilling globe trotting adventure film (we go to the Gobi Desert, India, and Mexico), all of it shot on stunning 35mm. I had the pleasure of seeing the film restored in theaters a few years ago and Vilmos Zsigmond’s cinematography was jaw dropping to see on the big screen.

Perhaps the true MVP of the film is Douglas Trumbull (2001: A Space Odyssey, Blade Runner), special effects maestro and Hollywood legend. The film has masterful special effects. Gigantic practical UFOs (the Mothership on an IMAX screen will blow your mind) and perfectly dated hand crafted alien puppets who appear in the films breath taking finale, one that is oddly emotional.

I’ll never truly understand why I am moved by the final minutes of Close Encounters. It’s a scene where Lacombe and his men cautiously wait outside the Mother Ship. The aliens all come out and take Roy away as one small alien approaches Lacombe. The two communicate with sign language, Williams’s theme, and with that simple gesture it’s as if they have understood one another without saying a word. It’s one of those inexplicable things that happens at the movies. The combination of image and score that just drives me to tears. I don’t think there’s a scene quite like it.