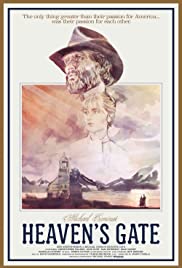 The Gate Is Broken

I had just emerged from the hills on highway 93 at the north end Flathead Lake on the way to Kalispell when I saw the first bumper sticker that read, To Hell With Heaven’s Gate. I was soon to see many more. This was August of 1981. Over a year after the film wrapped, ugly feelings persisted.

Kalispell Montana was the base of operations for that film shoot. I had worked on two film shoot in Kalispell just a few years before. Winterhawk, and Winds of Autumn, both low budget Westerns. Heaven’s Gate had cost over 40 million dollars, over 150 million in today’s money. For a Western with no bankable stars and no expensive optical effects. The problems began when the director, Michael Cimino, thought he was the bankable star. Like many foolish men, he believed he was the auteur, the author of the film.

Upon arrival in town I spoke to a guy who I had worked with on the two films I mentioned. He had been hired to drive Cimino. At an appointed time, he was told to arrive with Mr Cimino’s car at the front door of the Outlaw Inn, the motel where cast and crew were housed.

He was instructed to open the rear door of the limo and stand silently until the great man emerged and walked the short distance to the car. Close the door after he enters. Under no circumstances was he to speak to Cimino.

Locals were treated with contempt by some of the crew. Michael Cimino regarded them like objects to fill the frame with no regard to their welfare. Injuries, the death of animals and delayed meal breaks were the rule, not the exception.

The employment did not last long. Cimino, impatient with the long drive from Kalispell to the locations in Glacier Park, opted to take a helicopter each way. Cast and crew had to endure the two to three hour drive each way. The union crew frequently on triple overtime.

After Cimino won the Oscar for the gimmick-ladened pseudo drama, The Deer Hunter, he actually came to believe his press; he was a great artist of the cinema.

Somehow, this former director of Kodak commercials learned of a little known conflict between big cattle outfits (largely owned by absentee owners in Great Britain) and small ranchers, over grazing rights on open Federally owned lands in Wyoming, back in 1890. It had served as the basis for George Steven’s western, Shane, and Owen Wister’s novel, The Virginian (“When you call me that, smile.”). In his fevered mind, it would serve for an absurd Marxist sleigh-ride of victimization of Eastern European non English speaking immigrants (who had no part in the actual events) and and cattle barons, Harvard Grads to a man, who had followed Theodore Roosevelt’s example and headed west to the cattle trade. (TR went bust).

The Winter of 1889/90 was severe and ranches in Montana and Wyoming, the story set in Johnson County, lost most of their stock, frozen where they had stood, starving. The employee/mangers for the British owners had little patients for the plague of cattle rustlers taking what was left. Vigilante justice was common in lawless territory.

So, in director Michael Cimino’s “vision” , the story was about Eastern European immigrant farmers, and Harvard educated cattle barons, and legal death warrants issued by the governor, with the approval of the president of the United States!

The Heaven’s Gate of the title is a roller rink in the little town of Sweetwater. The town’s residents are a quarrelsome bunch. Men who are so poor they own a good old John Deere sod-buster plow, but no mule, horse or oxen to pull it, so must resort to a dozen or so women to act as draft animals, as seen in an unintended comic scene.

The men can not feed their staving families, but can afford to drink at the local saloon, bet on cockfights, and dally at the whorehouse ran by Ellas Watson, played by Isabelle Huppert (the real Ella Watson was not a madam and had nothing to do with the Johnson County war. She was the common law wife of store keeper, Jim Averill, played by Kris Kristofferson as a Federal Marshall in his usual one-note performance. Good looks count for a lot in the star system, as evidenced by the career of Brad Pitt).

These desperately poor people can afford to buy or rent roller skates at a rink in the unlikely location of 50 miles from who-gives-a-damn. Apparently, no one at United Artists, the studio footing the bill for this nonsense, at anytime questioned the appearance of a roller rink in the film. It’s main function seems to be as a town hall for the unpleasant citizens. Plenty of citizens of Kalispell wondered about it.

I saw the new, improved version, approved by the director, cut down from five and a half hours (One critic called it like a, “A five and half walk around one’s own living room”), to a still glacial two and half hours. Thirty minutes of story and two hours of pretty pictures. After a disastrous screening, the stunned UA executives asked Cimino nicely to edit down a version that would not kill the viewer by boredom. He succeeded, just barely.

The pictures opens, after a dull and pointless Harvard graduation sequence of the class of 1870, featuring a bewildered looking Kristofferson and a drunken buffoon who will play a drunk in the narrative to come, John Hurt; twenty years later with a period train chug chug chugging into Casper Wyo. On top an EMPTY stock car are a cargo of the aforementioned impoverished immigrants. (It should be noted that at the time, the railroad advertised in Germany and Bohemia for the prosperous farmers there to come to American for the free land, so they would have crops to ship from farm to markets in the East. They arrived with plenty of money to buy the equipment they needed to work the land.) I expected the show was in trouble after seeing that. They could have traveled in the railroad car. It was a lowbrow way of making a statement.

It seems Hester Street area of Manhattan had emptied out.

Also aboard is Marshall Averill, bringing a brand new Studebaker buggy for his sweetie, Ella the sex worker. She is also the sweetie of Nate Champion, the determined Christopher Walken , the Cattle Ass. enforcer. (Walken later has a wonderfully unlikely line, written by Cimino, “Shut your mouth, shit poke.” You won’t find that one in the the Dictionary of Western Words. Shit poke describes the script, however. There is another unlikely line spoken by Richarl Masur with an absurd Irish tilt, “Lord of shit”. Load of shit more likely).

Averill shows Ella the new buggy after having left his horse hitched up overnight (called abuse even back then), she drives it through downtown Sweetwater, causing the folks to gleefully prance behind it as if it is Juggernaut rolling down the main drag in Bangalore. Yippee!

Finally after many pretty, well composed shots, the stock detectives hired by the cattleman invade Johnson county with murder in the eye, armed with legally issued death warrants!

The immigrant community, after a lengthy and repetitious reading of the death list in Heaven’s Gate, march out like the mob they are to confront the villains, led by cattle baron Frank Canton (in reality, the former sheriff of Johnson County) played with intense menace by Sam Waterson, in one of the few convincing performances. Too late to save poor Nate, who perished in a hail of gunfire after turning on his masters.

The people who did not have a pot to piss in or a window to throw it out of, the whinny immigrants, who are so poor they own no working stock, or food to fed the family, are all well mounted and owners of buggies and wagons pulled by cart horses; and here is the best part, they all own expensive Colt and Smith&Wesson revolvers, Winchester, Sharps and Springfield rifles, and have a store of dynamite to toss at the bad guys. Let me assure you, DuPont don’t give it away. Then or now.

After the US cavalry arrives to save the besieged stock detectives, and poor hapless Ella is murdered by Canton in a revenge killing, Averill, who we were told in dialogue is a rich man, returns to his Jay Gatsby life, wondering the deck of his yacht with his well preserved Harvard girlfriend. (We witnessed them waltzing for what seemed like hours) The final scene is with Kristofferson looking his most bewildered.

Executive production managers can breakdown a script and calculate the cost of production almost to the penny. The Heaven’s Gate script had many costly elements. Location shooting, period costumes and props, set construction (Cimino had an entire town built and then torn down and rebuilt because buildings were too close by a couple of feet. Not at all noticeable on screen), a $150,000 prop in the form of the locomotive, and horses, lots and lots of horses. A huge crew.

The executive production manager at United Artists presented Cimino a budget of $11,000,000. He agreed he could shoot it for that price, but never signed the budget. It was a con, a grift, he had no intention of keeping his word. He was, after-all, an artist, an auteur of cinema. He was after “perfection”. His was the arrogance of the mediocre.

Perfection is a laudable goal, but it helps to know when you achieve it. Cimino, like Kubrick, demanded take after take hoping to see something drift through his vision. He found the fiftieth take was no better than the first. He shot one million, two hundred thousand feet of largely repetitious takes, much of it unusable but printed. All of them pretty. However, pretty can not overcome a lack of story or character development. Pretty can be pretty boring after a while.

In order to maintain his vision, Cimino avoided the UA executives responsible for the vast expenditure of time and funds. He was so secure in his arrogance as an âartistâ he never took responsibility for the debacle that ended in the destruction of United Artists, the company founded in 1919 by Douglas Fairbanks, Mary Pickford, D.W. Griffith, and Charlie Chaplin.

And he made a boring movie.

Had a man like Irving Thalberg been in charge of UA at the time, Cimino would have never been allowed his excesses. He would not have allowed a screenplay with overt depictions of class warfare. He would have insisted on a story. Accountability of the director.

The executives at Disney apparently did not learn the lesson of Heaven’s Gate when they allowed the cost of John Carter to balloon to almost  three hundred million dollars. Another lousy movie.

The two westerns I mentioned, Winterhawk and Winds of Autumn both enjoy pretty photography. Neither in my view are very good movies, however, both are more entertaining than Heaven’s Gate. They were never boring. They were met to be entertaining without artistic pretense.

Heaven’s Gate is a cautionary tale of the excesses by directors who believe an Oscar is an indicator of artistic merit, men who believe no cost is too high to realize the vision they think they have.

I am indebted to Steven Bach’s, Final Cut: Art, Money and Ego in the Making of Heaven’s Gate, the Film that Sank United Artists.