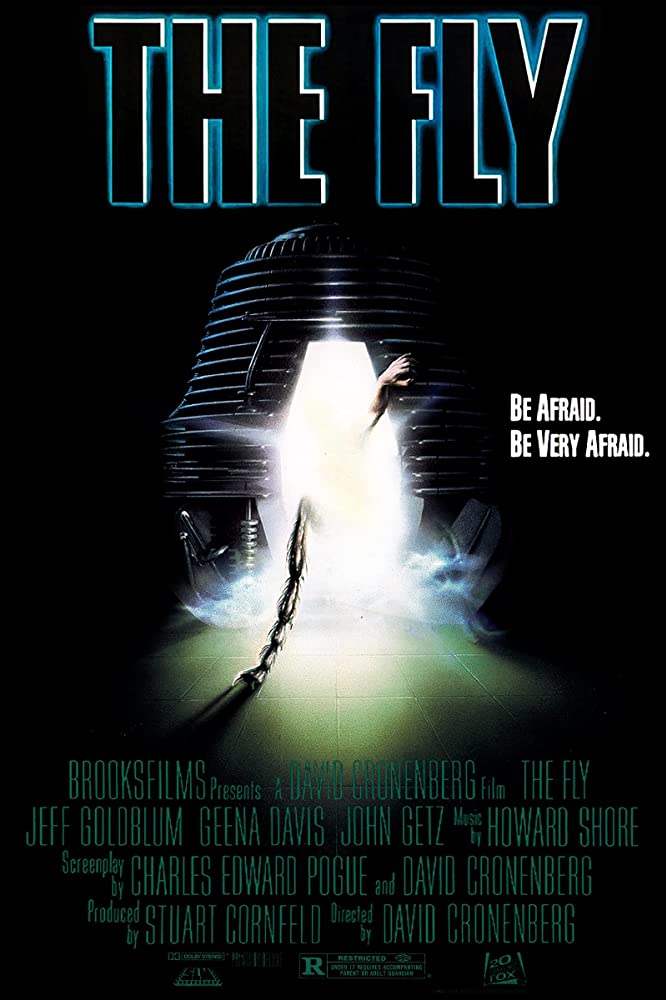 David Cronenberg’s remake of the (also very good) 50s giant bug movie The Fly added a lot of nuance and subtlety to the themes of the original. “Subtlety” might seem like a strange word to describe a movie in which a gradually decomposing man vomits on his food before eating it, but when it is not going for the extreme gross-out, The Fly is actually a moving meditation on the nature of disease and the inevitability of aging and death. It is also the movie that, long before Jurassic Park or Independence Day, made an unlikely nerd-heartthrob out of Jeff Goldblum.

At the time of its release, and even today, many viewers have taken the film’s more general exploration of disease to be about a very specific virus that was extremely prevalent at the time: HIV/AIDS. There is evidence to support this theory. The hideous transformation of Seth Brundle (Goldblum) begins after his first sexual encounter with Veronica (Geena Davis), and he worries about the possibility that his condition might be contagious. But there is another possible interpretation. Perhaps The Fly is about something that psychologists generally agree is a kind of disease in its own right, specifically the form of that disease that was most widespread at the time of the AIDS epidemic, the 1980s. That’s right, The Fly is about cocaine addiction.

Think about it. Even before he goes through the telepods, Seth is hyperactive, easily distracted, fast-talking and bug-eyed. Sounds like a coke-head, no? Once he does go through, his obsessive tendencies and predilection for wild-eyed philosophizing are ramped up. He believes the teleportation has improved him, and he is eager to get Veronica to join him on his next trip, much as an addict might try to sway a reluctant partner to partake in his addiction. He has far greater strength, stamina, and energy, and he babbles rapidly at Veronica in a cafe, on a variety of rambling topics, each with the slightly scary intensity familiar to anyone who has spent time around an acolyte of the fabled Bolivian marching powder.

Cronenberg himself acknowledges this on the DVD commentary track, however briefly. He notes that in that cafe scene, Goldblum’s performance has a parallel with someone on cocaine, and states that he “really did want there to be a strangely attractive, though dangerous, up-side to the fly fusion.” This is clearly evidenced by Seth’s out-of-the-blue gymnastic abilities and increased sex drive. As he says in the cafe scene, “It’s like a drug, but a perfectly benign and benevolent drug,” and, “I don’t even need to sleep anymore.” Cocaine is far from a perfectly benign and benevolent drug, but it can certainly seem that way to someone soaring high on its influence, and at first, all the side-effects of the teleportation process do seem to be positive.

As with cocaine abuse, though, the dark side comes out soon enough. As cocaine is a social drug, Seth craves company for his teleportation experiments, and when Veronica refuses, he loses his temper and calls her “a fucking drag.” She tries to get through to him, telling him he has a problem, in much the same way a loved one might speak at an intervention for an addict. His response mirrors the addict in denial as well; he is comically distracted and inattentive at first (Veronica: “Those weird hairs that were growing on your back, I had them analyzed.” Seth: “Huh? Oh. Yeah, that’s a strange thing to do”), and then, when she tries to tell him he is sick, he flies into a rage and starts punching holes in the walls. Cronenberg himself once again makes the subtext explicit here; as he says on the DVD commentary track, “At this point, the relationship is more like that of a drug addict who refuses to acknowledge that they have a problem.”

As for the more popular AIDS interpretation, Cronenberg has addressed that as well, saying, “If you, or your lover, has AIDS, you watch that film and of course you’ll see AIDS in it, but you don’t have to have that experience to respond emotionally to the movie and I think that’s really its power. This is not to say that AIDS didn’t have an incredible impact on everyone, and of course after a certain point people were seeing AIDS stories everywhere, so I don’t take any offense that people see that in my movie. For me, though, there was something about The Fly story that was much more universal to me: aging and deathâsomething all of us have to deal with.”

Okay, so he is not exactly endorsing the cocaine theory there, either, but addiction (along with disease, aging, and death) is certainly something all of us have to deal with, as well, whether it is alcohol, coffee, or something stronger. I would never suggest that Cronenberg himself struggled with the white powder at any point, but it is interesting to note that in 1986, bestselling author Stephen King was writing self-acknowledged cocaine metaphors into two separate novels (Misery and The Tommyknockers, both published in 1987), and David Cronenberg directed one of the best filmed adaptations of a King novel, The Dead Zone, in 1983.

Yes. That is a coincidence. At any rate, The Fly is still (at least partly) about cocaine addiction.