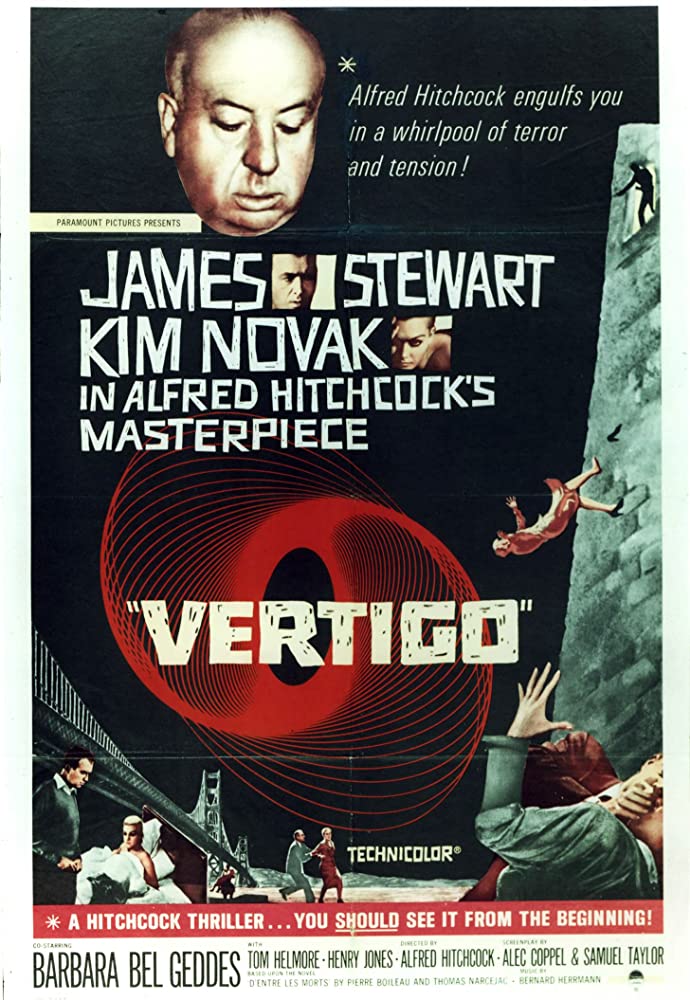 No director was more fluent in that language than Alfred Hitchcock. Vertigo is the most conspicuous example of his fluency.

Vertigo is a Pygmalion and Galatea story. The question in this case, who is Pygmalion and who is Galatea? When, is a better option. On the surface, it would seen Judy is Galatea to Scottie’s Pygmalion. But that is only in the second half of the film, after Scottie’s guilt engendered catatonia. He wishes to reconstruct his feelings for a ghost.

Gavin Elster uses Judy to mold Scottie into the man who will be the unwitting alibi for the murder of Madeleine. This is the real Madeleine, the doomed Madeleine, who we only see as she falls past the window in the tower. (There are several towers in this film.) Judy has been transformed into the wife Gavin will seemingly murder.

It is the story of a pursuit of a empty romantic ideal, which separates Vertigo from the class of mere suspense films. The film opens on a split screen, suggesting the split of Madeleine/Judy, before the camera pulls back to reveal the split is top rung of a ladder on a building in San Francisco. Scottie Ferguson is in pursuit of a person unknown with the aid of a doomed police officer. It is here we learn of the disability that will engender Scottie’s pursuit of a phantom.

Vertigo causes him to become un-moored from his solid identity as a detective, ending his quest to become police chief. Cops like order, not chaos. His lack of purpose enables old collage chum Gavin Elster to mold him into the perfect patsy, the perfect alibi for the murder of his wife, the wealthy Madeleine (Elster is the German word for magpie. Birds are harbingers of doom in Hitchcock films)

The working class girl Judy Barton, Elster’s mistress and Madeleine lookalike, has already been molded. Like Pygmalion creating a Galatea, she will become the object of Scottie’s romantic pursuit. Scottie will have the purpose he lacks as a result of his vertigo, the very thing with propels him into a ghostly dreamworld.

Hitchcock begins suggesting the dual Madeleine/Judy split personality from almost the moment see see her through Scottie’s eyes. At Ernie’s, she passes by a mirror to be reflected as two people. This occurs again the next day in the mirror in the flower shop.

Green is the color of ghosts in Vertigo. Madeleine is wearing a green stole when we first see her. Her car is green. When Scottie first sees Judy with friends on the street, she is wearing a hideous green dress, unlike the elegant clothes worn by Madeleine. She lives behind the green sign of the Empire hotel, and her transformation becomes total as she is born through a green illumination into Scottie’s arms. There they are both transported through space and time to the last kiss before her confession he can not understand, moments before her death.

The murder scheme is finally undone by to the necklace belonging to the poor dead Carlotta, the supposed spirit possessing Madeleine. Judy has kept it was proof, the only tangible proof, of her love for Scottie, the love that was not supposed to happen. “It wasn’t supposed to happen this way. It shouldn’t have happened”. She tells Scottie as she departs to fulfill her part in the murder.

The necklace serves the same purpose as the ring Uncle Charlie gives his niece Charlie in Shadow of a Doubt, and the cigarette lighter in Strangers on a Train.

The unanswered mystery happens in the McKitterick Hotel, originally built in the 1850s for poor sad Carlotta. The desk managed by former script supervisor turned actress, Ellen Corby. Madeleine enters, seemingly gets past Corby and ascends the stairs (shot to appear very much like the staircase of the Bates home in Psycho) get into her room…and vanishes. Her car gone.

Scottie finds the car parked in front of the Elster apartment house, the Brocklebank on Nob Hill. This magic trick is unexplained.

Hitchcock uses his camera sparingly. Close-ups or single shots are a rarity, unless for a purpose. In the scene in Scottie’s apartment after he saves Madeleine, he keeps the two isolated in singles as they talk and get closer emotionally and finally end in a two shot. For reason that escape me, two shots are a rarity in today’s films. Wide masters and close-ups are the rule. You will never see an extreme close-up in a Hitchcock film. I can’t think of a single instance.

This is not a comprehensive review. Vertigo is too complex and multilayered for a simple article. In addition, I do not fully understand some scenes. The graveyard, the giant redwoods. I do not understand the significance of Scottie’s green sweater after his rescue of Madeleine from the bay.

I have gained some insights from my analysis. I hope the reader has, also.