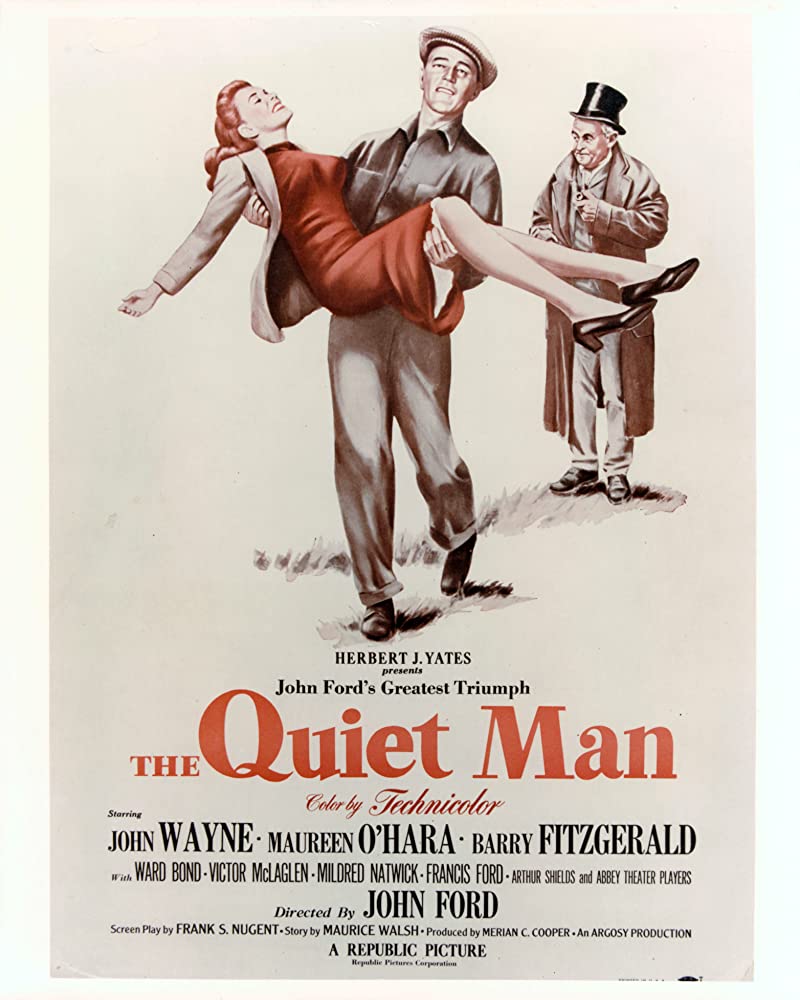 An American boxer comes to Ireland to rape, fight and pillage the countryside

John Ford’s The Quiet Man just might be the only film ever made devoted exclusively to John Wayne’s desire to get laid. Over the course of 129 blarney-filled minutes, Wayne huffs and puffs about the Irish countryside, piss-drunk and full of rage over not being able to throw Maureen O’Hara down on the bed and have his swaggering way with her. Wayne is Sean Thornton, an ex-boxer from the United States returning to the land of his birth to escape his guilt over having killed a man in the ring.

Within moments of his arrival, he makes an offer for his ancestral home and seconds after that, makes another for O’Hara’s hand. Because he’s in a foreign land and must abide by its ridiculous Catholic customs, he simply can’t take her to the barn and splash his manly seed about. Instead, he has to marry her first, which is a process that involves a dowry, a loutish, overly possessive brother, and what appears to be each and every priest in the Emerald Isle.

This is the sort of town where everyone staggers around in a stupor — including men of the cloth — and the women exist solely to be widows, virgins, and young wives waiting to be savagely beaten after a drunken man returns from the pub. Hell, with all the fighting, cussing, drinking, and singing, it could be argued that Ford’s stereotypes do more damage to the cause of the Irish than a hundred potato famines. But this is the homeland Ford holds near and dear to his heart, which makes sense given his reputation as a whiskey-soaked bastard.

While the Technicolor visions of Ireland are a stunning sight to behold, the story is little more than a Ford family holiday; a light break between the sort of films where he single-handedly created Western mythology. Still, The Quiet Man is locked in a fantasy all its own; where we truly can go home again and what’s more, the entire village will show up to see us along. Things aren’t helped by O’Hara (as Mary Kate Danaher), who is so unsympathetic that we can’t help but root for Wayne as he drags her along the ground despite his deplorable misogyny. This is the sort of film where sweaty oafs roar for their supper and get it — piping hot — lest the poor girl get a bloodied fist in the kisser.

Mary Kate is a red-haired siren to be sure, so we understand why Sean wants to split her Irish rose, but we simply can’t believe that he’d abide by tradition and wait for her brother to hand over $350 in gold coins. His raging blue balls would have eventually gotten the best of him, after all. At one point, Sean grabs Mary Kate, lifts her in his arms, and turns down the bed, but instead of a brutal, much-deserved rape, he simply throws her down, breaking the expensive piece of furniture in the process. The censors of the era must have had a field day with that scene, as it is charged with an unbearable sexual tension, but we’re asked to believe John Feckin’ Wayne would simply walk away. Nope, the Duke takes what he needs. He’s too busy skinning redskins to show compassion and restraint.

And so we endure the long build-up to the final scene, where Sean and Mary Kate’s brother Will (played by the reliably ox-like Victor McLaglen) battle on the streets, in the fields, and over the lush hills, to the only possible conclusion: the two men respecting each other, Mary Kate finally giving it up, and the local widow wedding a tamed Will. Before that end, however, Sean and Will engage in a heavyweight clash far longer even than the famed Gentleman Jim Corbett/James L. Sullivan bout of 1892. At least a dozen buckets of water are splashed on the two brutes as they make their way through the town, and by the end, so many townspeople have joined the party that the whole thing could easily be confused for the New York City Draft Riots of 1863. Not like the Irish would know anything about that, of course.

I’m not clear what the usually reliable Ford was up to here, although one suspects that the comedy was quite intentional. Ford clearly loves these rascals, and as usual, he explores community with an eye for the bonds that keep larger concerns at bay. This, after all, is an Ireland unaffected by ‘the troubles,’ or any sort of religious conflict, and what we are left with is an unspoiled Eden where work (or the absence thereof) is never an issue. We’ll make do, just don’t hide the bottle. Still, Wayne seems confused by his status as a romantic lead, and the few brief scenes of awkward courtship (supervised walks and the like) usually defer to slaps, threatened slaps, and discussions of Wayne being forced to spend his evenings in a sleeping bag until he can finally crash his pasty heap upon the snotty lass.

Far from a tale whereby civilization (read: women) tames the beast, the female in question grabs the hero by the balls, demands a bloodbath in her honor, and won’t rest until he’s done her bidding. Ford’s Westerns are usually patriarchal affairs, but he recognizes that gunplay eventually gives way to the security of hearth and home. Perhaps the final brawl is at last that regeneration through violence that men like Wayne need before settling into domestic quietude, but as it came with the full endorsement of his wife, the usual Fordian values seem distant, if not entirely absent.

Whenever I am confronted with a so-called classic that I find less than stellar, I first ask why it retains its beloved status through the generations. True, it might be the quintessential Irish tale — tall, long, and told through the haze of whiskey-soaked half-truths and blarney-inflected malarkey — but I imagine it’s the utter lack of complexity or depth that has people riveted. It’s such a joyful tale, after all, where the rigid mandates of the Church can be dismissed as playful quirks, and the ungodly consumption of paint thinner leads not to death or cirrhosis, but innocent kisses and bar songs about the homeland. Wayne can wear a bowler and not elicit snickers, a hillside horse race can occupy a good ten minutes without complaint, and we can all dance a jig while laughing our heartaches away. We confront nothing, ask even less, and stare longingly at those endless seas of green.