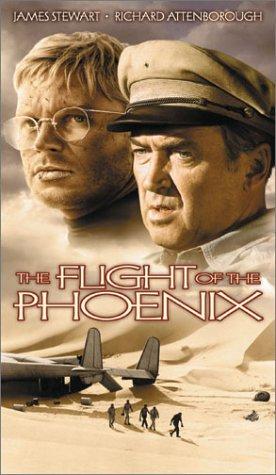 The Flight Of The Phoenix

A plane crash in the Sahara results in a clash of wills to survive.

James Stewart can be solidly forgiven for films like It’s A Wonderful Life because of efforts like Vertigo and this film, The Flight of the Phoenix. It is not a wonderful life, but it is a wonderful film, with top notch acting and dialogue that you would expect from a classic film.

The Flight of the Phoenix is one of my favorite films. I have watched it at least a dozen times. The clash of personalities in the beginning is just a hint of the bigotry and clash of wills for survival that will ultimately surface after the disastrous crash in the middle of the Sahara.

Frank Towns (Jimmy Stewart) is a seasoned grunt pilot who has seen better days and jobs, but is now transporting various oil workers and other personnel to remote areas in the Sahara Desert. Things go horribly wrong as the plane is forced to ditch in the middle of nothing because of a blinding sand storm.

The survivors on the crashed plane are a diverse group that included a physician, his mental patient (Ernest Borgnine), a military captain and his Sergeant, an airplane design engineer, and several others that make for a pot-stir of a wonderful cast.

As conditions deteriorate and hopelessness closes in, the minor skirmishes become a full-blown battle of will between the survivors. It becomes apparent that there will be no rescue. Frank Towns is the pilot of this disaster, but Dorfmann, the German Engineer, is the one and only hope to get this doomed crew out of the desert. Dorfmann designs airplanes, and has determined that they can re-purpose the crashed airplane into something that will get them away from this Hellhole. Of course, Frank is skeptical to the point of being hostile, but he has no answers either, so he reluctantly goes along with Dorfmann’s outrageous plan to build another plane and escape from certain death.

The Flight of the Phoenix is an outstanding movie, mainly because of the cast. James Stewart is the big star, and his interaction with his co-pilot Lew (Richard Attenborough) is something to behold, as they play off of each other’s strengths and weaknesses. The supporting cast is also solid, with Ernest Borgnine, Peter Finch, George Kennedy and Ronald Fraser playing the reluctant sergeant.

The real star of the movie, however, was the German engineer Henrick Dorfmann, played perfectly and brilliantly by Hardy Kruger. Dorfmann first appeared to be a meek, slide-rule carrying nerd, but as the movie progressed, he became a powerhouse of a superstar who saved the day. “Who is in authority here?” was the ice-cold question that would determine the fate of the desperate men who were stranded in the unforgiving Sahara Desert.

The Flight of the Phoenix is a classic that you will never, ever forget. The acting and dialogue are superior, especially the interactions between Jimmy Stewart and Kruger. There is one stunning reveal that I will not spoil for those who have not yet seen this wonderful movie.