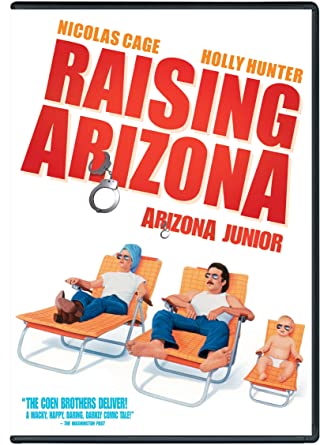 An ex-con and an ex-cop decide to end their childlessness and kidnap a quintuplet that will never be missed. Hilarity ensues.

In just a third of their output, the tapestry of locales and personas from vast walks of life in the Coen brothers’ cinematic universe reads more like an illustrated road atlas of the US than disparate stories. After just six films—Blood Simple, Fargo, The Big Lebowski, No Country for Old Men, Burn After Reading, and today’s subject—it is evident that if there is anything indisputable about a Coen Brothers’ film, it is that their boundless appreciation for all things Americana often arrives at the expense of self-representation. The brother’s catalog boasts no less than the Lone Star state, the Southwest, California, D.C., and their native Midwest, and that is just the tip of the iceberg. No one can accuse the brothers of being homers of their turf or gang though they rightly earned themselves a pass. Which brings us to the next stop: Tempe, Arizona.

Beginning with the amorous overtures repeat offender “Hi” McDunnough (Nicholas Cage) extends to a female officer (Holly Hunter) taking his mug shot, the Coens’ comedic intentions are declared loud. The advances are outward, persisting throughout a series of bookings that the equally hapless Ed (as in Edwina) yields to, having been spurned recently. There is no way for guards and prisoners to openly fraternize and yet here we are. Think of marriage proposals made on a whim in Vegas chapels, and that’s Hi and Ed; an unrepentant stick-up kid and a jilted cop. An unlikely matrimony, yes, but unapologetically trashy. Reality creeps in once their honeymoon is over and the couple discovers Ed can’t conceive and they’re unfit to adopt. She turns her badge in and retires to a domestic funk and a maternal void whose fulfillment is slyly sold as one version of the American Dream.

This takes place over a ten-minute pre-title sequence, but the absurdities, the entrance, and the announcement of the film’s tone, are all laid out in one concise statement. Next, there is a clash in Raising Arizona that manifests between style and tone versus subject matter. Crime and scruples, reformation and punishment, risk and reward, business and pleasure, ends and means follow as conflicting drives. Normally, a premise involving kidnapping a child is too horrifying to render lightly in anything other than a farce, and the Arizona in question, one of a quintet of boys born to an insufferable furniture mogul (Trey Wilson), winds up in Ed and Hi’s care. The couple (Ed, really) explain away the gravity of their actions along the dualities above, and for all intents and purposes, the baby is for keeps despite all the impulse and disproportionate methods taken to satiate that parenthood instinct. Frances McDormand appears in an electrifying cameo that proves her chops as a supreme force in front of the camera.

All is well in the household until the infant presents a golden ticket of sorts for all involved. Suddenly, that now includes—the couple, of course—a mythified bounty hunter (Tex Cobb), and Hi’s fugitive cellmates (John Goodman & William Forsythe), which is in line with the Coens’ other thematic obsession—duplicity. There is always blackmail, deceit, or a conspiracy centered around a prized asset, a fraudulent insurance claim or a leftover spoil. The bounty hunter is a brutish personification of mayhem, shown first as a conception of Hi’s guilty conscious in a dream, despite this all being Ed’s master plan with Hi as a reluctant accomplice. Meanwhile his cellies break out of jail through a hole in the ground in a scene resembling a violent delivery under a torrential downpour. All is set up for a collision course as the intruders will surely converge on this newfound domestic bliss.

Things comes to a head in a corner store shootout scene, a sequence which is a perverse juxtaposition of that land’s frontier past against the convenience of its modernity. Hi (of his own accord, this time) relapses and robs a convenience store as Ed and Junior wait in the car. Ed sees this unfold and drives off in disbelief. The irony. Hi flees on foot and attracts the neighborhood’s dogs and a responding patrol. The cops catch up and open fire in a supermarket. Even a deli worker brandishes a double-barrel. This all starts with the clerk who buzzes the cops and fires the first shot. For the pursuers, the ritualistic zeal in seeing their engagement out with an arrest or a kill, lest all the bullets casings lie in vain, is focused, resolute, and serves as visitor’s brochure for this country; where the authorities slacks off, the second amendment picks up the slack.

The urban setting is only shown in that scene, with most of the photography taking place among stunning desert vistas. The McDunnoughs live in “Suburban” Tempe, which to them translates to a mobile home in the open is one of those “you know you’re a redneck if…” jokes the Coens intersperse with flourishes of cartoony, slapstick humor that remind the viewer of the tone. Now, far be it from me to accuse Ebert of said lapse—God knows I didn’t catch every line in Arizona on the first go-around—but the critic was mighty put off by a verbose script spoken by commoners. To an extent, I can see how the distractions can exist as everyone is innately a stickler for some thing in their cinema. One bit reminded me of how the screenwriter, especially if working in a dual director-writer role, shouldn’t allow their voice to be recognized in one line of dialog. As your second film that doesn’t apply, but there is a similar semantics argument that Tarantino used in Django: Unchained during the Klansman’s rally. Which is something you should have out of your system by your eighth film.