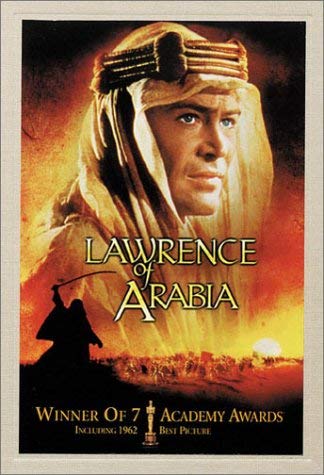 The story of T.E. Lawrence, who united Arab forces to have a serious impact on the WW1 war against the Turks.

Lawrence Of Arabia is David Lean’s 1962 epic that won 7 Oscars, but of course, not the one that counted for the always overlooked Peter O’Toole. Lean’s resume includes Doctor Zhivago, Bridge On The River Kwai, and other classics. His masterpiece, of course, is Lawrence Of Arabia, an almost 4 hour long bum-numbing epic without God or a romantic interest. A film about war that does not showcase the American experience and accomplishments. It starred the relatively unknown Peter O’Toole, and is one of the most beautiful films ever created.

Lawrence of Arabia is the story of the real-life T.E. Lawrence, who united warring Arab factions into guerilla units to fight the Turks in WW1. Lawrence accomplishes feats that no one else, including the English Army has been able to do. This film is the story of the amazing exploits of Lawrence in the bleak, but hauntingly beautiful Arabian Desert.

There are several versions of the film, both on DVD and VHS. I reviewed the 227 minute version which included the overture. The most complete version is the 1989 restoration by Jim Painten and Robert H. Harris. This Director’s Cut features 2 disks with a one-hour documentary that includes cinterviews and old newsreel featurettes. There is also an interview with Steven Spielberg where he describes some of the scenes as “the greatest miracle he has ever seen on film.”

The cast is a powerhouse of stars, with Alec Guinness, Anthony Quinn, Anthony Quayle and Omar Sharif, among others. Have no doubt, however, this movie is Peter O’Toole’s show, in his first big movie role, and what a movie! O’Toole as Lawrence is from the beginning a puzzling character, an enigma. He comes off as gentle, and almost effeminate at times, but could also be brutally ruthless. His brilliant leadership, insight and focus were often interspersed with periods of soul-searching brooding and self-doubt, in spite of his vast accomplishments. His acting performance in Lawrence Of Arabia has to be one of the top male actor accomplishment in all of the history of cinema.

Of course, great acting and script alone cannot make a masterpiece. Some one like David Lean can, and he did exactly that. The desert cinematography is without peer, especially when seen in the 1989 restoration, but the real power of this movie is Lean’s seamless editing and the photography of Fred A. Young. He toggles between character close-ups and the never-ending desert landscapes, perfectly catching Lawrence’s changing emotions. Never has the horror of battle and bloodshed been shown more vividly, not because of graphic and gratuitous blood and gore (this was 1962), but because of the devastating effect it had on the film’s characters.

Again, this is a very long movie, unthinkable by today’s standards, but nothing was wasted in this film. The action desert scenes were simply exhilarating with Maurice Jarre’s relentlessly excellent score. The film consisted of basically 5 acts:

Peter O’Toole’s chameleon-like mastery of all the different emotion and personalities in these acts was arguably the greatest tour-de-force in cinema history. It cannot be repeated enough what a travesty it was that he did not win Best Actor, I don’t care how many mockingbirds Gregory Peck metaphorically killed.

If you have somehow not yet seen this majestic masterpiece of film history, try to find the 2-disc Director’s Cut and watch it on the biggest screen possible, not on an iPhone during your lunch break. You won’t have time. There are, of course, no special effects or CGI in this 58 year old epic, just the brilliance and competence of the masters that crafted it. Lawrence Of Arabia is simply the highest and best use of the big screen and one of the top movies ever created.

Memorable Quotes from Lawrence Of Arabia: