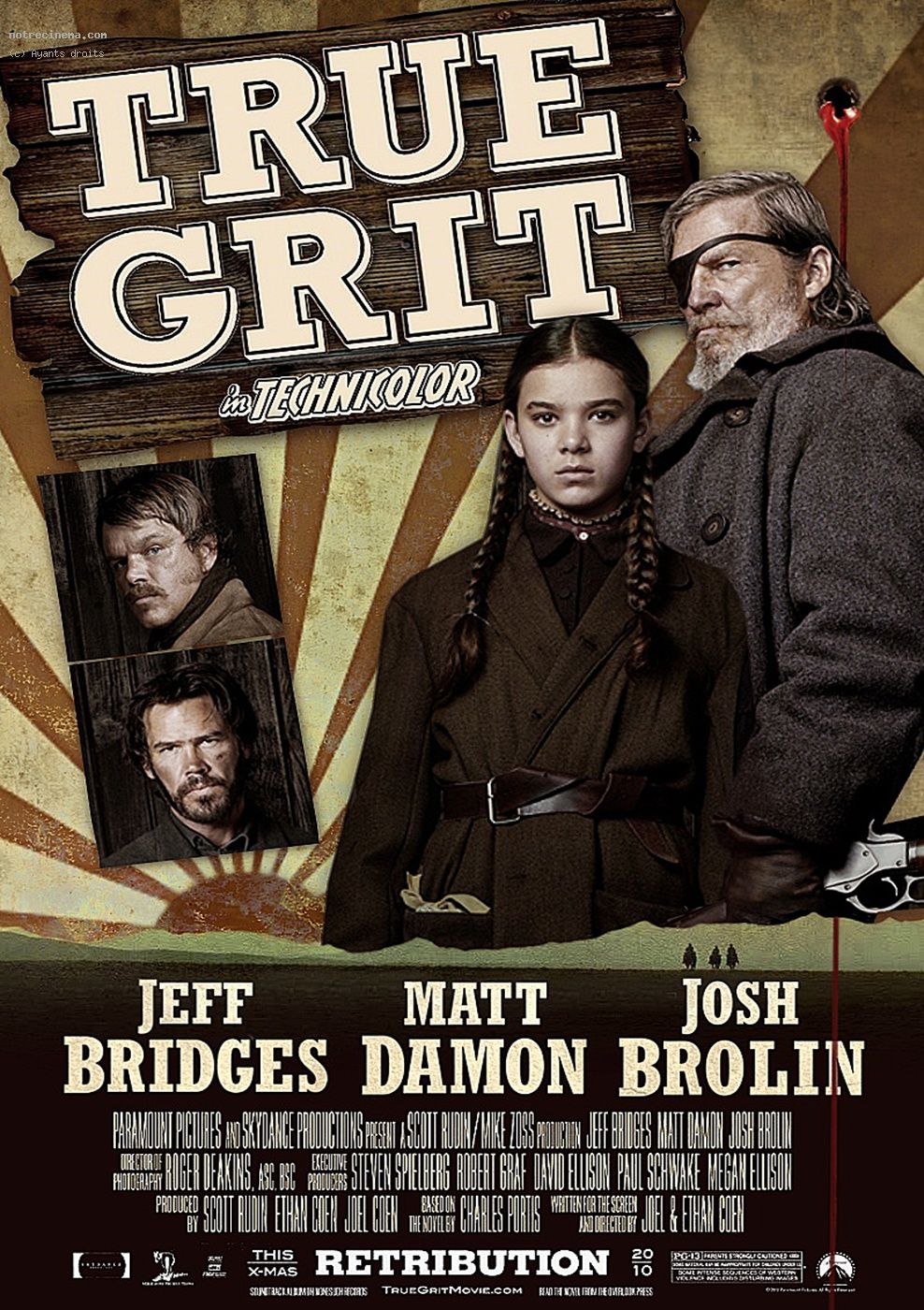 Jeff Daniels as The One-Eyed Dude
Hailee Steinfield as a national treasure.
Matt Damon as smarmy, and ostensibly Texas
Josh Brolin as the bad guy.

Fair Value of True Grit: $15.00. Because you can’t watch Sergio Leone all the time, this tale of Prairie Justice is one of the better of modern westerns. In many ways it is the perfect balance of the comedic and the dark aspects of Coen Brother’s oeuvre. It’s the kind of film that would have swept the Oscars during the days of Old Hollywood.

Prairie Justice: The young girl Mattie Ross (Hailee Steinfield) is in Fort Smith to collect her murdered father’s body for funeral. But she has other ideas, namely of hiring a US Marshal to hunt the murderer Tom Chaney (Josh Brolin), who has fled into Oklahoma. She recruits Rooster Cogburn (Jeff Daniels), a mean and drunk Marshal who seems over the hill. They are tailed by a Texas Ranger (Matt Damon), who is seeking the same man, but for a bounty in Texas.

Who Will Like This Film? Anybody that likes Westerns, this is a fine addition to the classic canon.

Who Won’t Like This Film? That’s a tough question, but it’s an awfully American film. If you don’t see the point of films about the frontier, then this will probably elude you.

How is this film better than the 1969 John Wayne Classic? Three major things: plot pacing, supporting characters, and scenery. The older version was shot mostly in Southern California (Well, actually Ouray Co. in Colorado, but that is close enough),and it shows. The Coens, on the other hand, do a better job of conveying the prairies and hills of Oklahoma, and the beauty of a nearly pristine wilderness.

Also, the casting is impeccable all the way through. The John Wayne film had stars, but this version has characters, like Colonel Stonehill (Dakin Matthews) and the Bear Man (Ed Corbin). It keeps the film weird and rooted. The villains are not mustache twirlers, but desperate and violent men, living at the furthest fringe of civilization.

The pacing of the plot is more focused on Mattie, who was the narrator of the novel that was the film’s basis. Centering her as the point-of-view character adds greatly to the suspense of the film- for all of her resources and determination, she is still a young girl way over her head in a remote and dangerous situation.

Overall, the Coens deliver a True Grit that feels more grounded, more like something that could have happened than a fantasy of western justice. There’s no character that returns from the badlands truly intact. It’s a cthonic journey, a dark and bracing coming of age tale brimming with idiosyncracy and theodicy.

Is This Film Worth Re-watching? Absolutely. It’s in my bag of DVDs I take with me whenever I travel- one of those films that I go back to again and again, much like Sergio Leone. Buy a copy of this, it’s always a solid backup for entertaining guests and visitors.