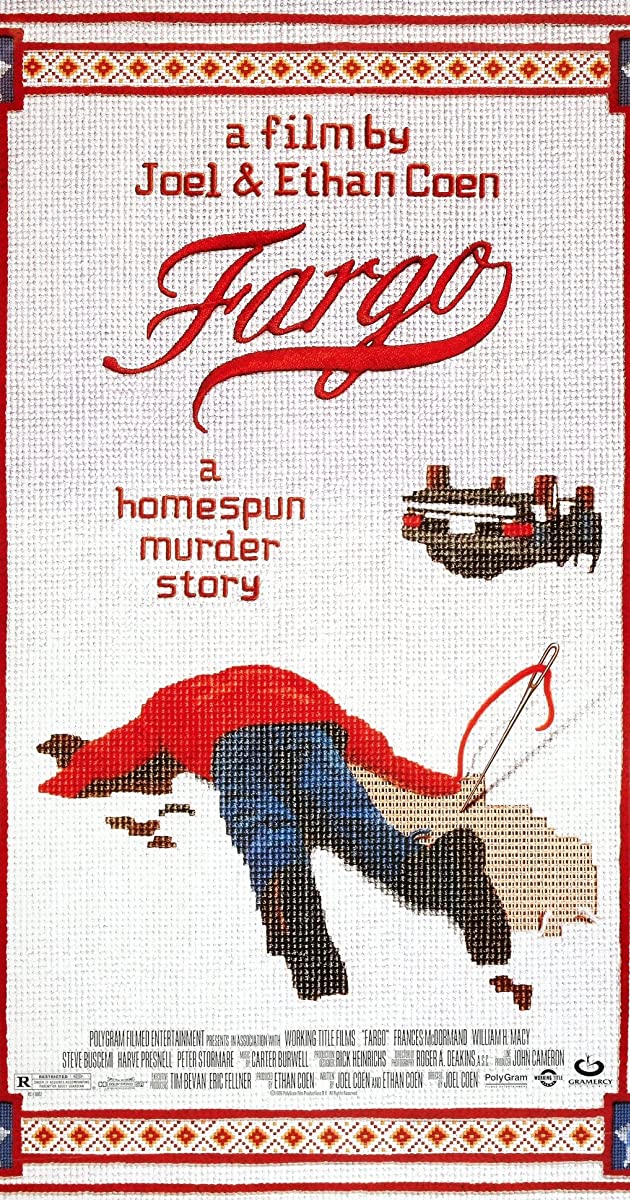 A desperate and inept crime has horrible consequences in Fargo, North Dakota

THIS IS A TRUE STORY.

The events depicted in this film took place in Minnesota in 1987.

At the request of the survivors, the names have been changed. Out of respect for the dead, the rest has been told exactly as it “occurred.”

With these words Joel and Ethan Coen open their unassailable masterpiece (one of several in their canon), Fargo. It is the kind of opening text so often found at the beginning of serious, award-winning films, of which Fargo is certainly one, but is also, of course, complete bullshit. While the narrative was inspired by the real-life stories of a GM employee who committed fraud by manipulating the serial numbers of cars, and a Connecticut woman who was murdered and disposed of in a woodchipper, the rest is entirely the invention of the Coens. As Ethan said in 2016, “We wanted to make a movie just in the genre of a true story movie. You don’t have to have a true story to make a true story movie.” It was a clever trick in a pre-Blair Witch Project cinematic world, and most audience members and critics cheerfully swallowed the lie, not only due to the boldness with which the Coens asserted their false claim, but also the skill with which they crafted their story, a darkly comic crime tale just crazy enough to seem true.

As a Minnesota native residing in New York for the past decade, I should probably hate this movie, or at least be slightly ambivalent about it, but no matter how much I might jokingly pretend to be offended by bad impressions of the Minnesota accent and its associated colloquialisms and mannerisms, this remains one of my favorite films. It was never really about the accents anyway. Whether they set their stories in Texas, Arizona, California, or anywhere else, it is the characters that really matter; the Coens are just too good at their craft not to also include all the rich flavor of whatever region they have chosen and, having grown up in Minnesota themselves, they have probably never more accurately and completely captured the flavor of a region than they did in this film. At its core, though, Fargo is really a story about ambitions and aspirations, and how ambitions tainted by greed and pettiness lead to ruin and death.

Jerry Lundegaard (William H. Macy) is our primary aspirant, though he is far too pathetic and ultimately despicable to be called the protagonist (Macy was in fact nominated for an Oscar as Best Supporting Actor, despite the amount of screentime and primary importance to the plot belonging to his character). Fargo is actually a town just outside of Minnesota, in North Dakota, where Jerry goes in the opening scene to hatch the plan that sets the story in motion. He does this far from his own home, in another state, presumably in honor of the old aphorism about not shitting where you eat. In his heart, Jerry knows how wrong his plan to kidnap his own wife is, despite his reassurance that it is “all worked out,” and the supposed pros he’s hired seem equally half-baked. Carl Showalter (Steve Buscemi), the less taciturn of the two, raises reasonable questions about the plan, which are echoed by his partner, Gaear Grimsrud (Peter Stormare), only to ultimately trail off mid-sentence and decide to follow through with a literal “fuck it.”

Though it is impossible to really like Jerry, Macy is brilliantly squirmy and sweaty in the role (a performance that anticipates Adam Sandler in Uncut Gems, as a similarly flawed character drowning in the murky waters of his own unhealthy ambition), and we can sort of see how he got to be so pathetic in his scenes with his wealthy father-in-law, Wade Gustafson (Harve Presnell), an old-school hardass who clearly can’t stand the idea of Jerry being in charge of anything once the kidnapping is well underway and who, even before that, is more than reluctant to hear out the legitimate business proposal Jerry brings to him. Jerry, with barely masked desperation, tells Wade how good his plan could be for himself, his wife, Jean (Kristin Rudrud), and their son, Scotty (Tony Denman), to which Wade grumbles, “Jean and Scotty never have to worry.”

The themes of aspiration and ambition are underscored by the fact that Jean is talking to Scotty about his potential (“You’re not a C student, so why are you getting C grades?”) when Jerry gets the call informing him that Wade’s trusted business partner, Stan Grossman (Larry Brandenburg), likes his proposal, leading Jerry to believe he should cancel the (absolutely insane) plan of kidnapping his own wife. It is a moot point, of course, not only because it is already too late by the time Jerry gets around to even trying to contact Carl and Gaear, but also because his proposal was never going to net any serious money for Jerry anyway, with Wade and Stan on a completely different page about Jerry’s potential, preferring to pay him a finder’s fee for the investment rather than partnering with him in any real way (“We’re not a bank, Jerry”). The gap between ambition and reality is brilliantly illustrated when Jerry rehearses a phone call to Wade after coming home to the aftermath of the kidnapping (itself a lumbering, noisy affair that shows us again how half-cocked Carl and Gaear actually are, compared to the icy pros Carl at least seems to imagine them to be). He finds the perfect grieving tone, then makes the call, only to be flummoxed when he reaches a receptionist instead of Wade directly.

The true protagonist of Fargo, in terms of being a primary character who is not actively despicable and impossible to root for, is Marge Gunderson (Frances McDormand), who first appears fully one-third of the way into the movie. After the seven minute masterpiece of violence and suspense that is the multiple murders on the freeway committed by Gaear (a truly chilling character that anticipates Anton Chigurh in No Country for Old Men, though Gaear is even more laconic and difficult to read), the calm, peaceful life shared by Marge and her husband, Norm (John Carroll Lynch), is a warm contrast. Marge and Norm represent the good, healthy side of aspiration, with Marge’s pregnancy a constant reminder of the optimism and purity at the core of her being and her life with Norm. Beyond that and her encouragement and support of Norm in his wildlife painting endeavors, Marge’s professional ambitions seem to be fulfilled, as she is clearly something of a big fish in a small pond as a police chief in Brainerd. We can see she is a top-notch detective as she runs circles around her deputy, Lou (Bruce Bohne), who does little more than hold their coffees and say, “Oh, yeah?” as they investigate the grisly triple homicide Gaear left in his wake.

Marge is far from arrogant, though, and not too proud to see when she has judged a situation or a person incorrectly. This is the main function of her scene with her old high school classmate, Mike Yanagita (Steve Park), which is also about aspiration. As Margie later discovers, Mike has spun a web of lies for her about the life he perhaps wishes he had, though the true sadness of the life he does have bleeds through in his invention of a wife who died of cancer. Perhaps sharing this fantasy with Marge solidifies and makes it more real for him, but it makes Marge aware of her own capacity for being duped by someone like Jerry, who seemed like “a nice enough guy” in her previous interview of him. After the shock of finding out how convincingly Mike lied to her, though, she goes back for a second, more meticulous interview, which (“Oh, for Pete’s sake”) Jerry memorably flees.

Just as Jerry is undone by the greed of his own ambitions, Carl is ultimately destroyed by his pettiness and his aspirations to be a tough guy. We see how the former undoes the latter in the scene in which he steals a license plate from an airport parking lot, then makes a bit of a scene trying to avoid paying the parking attendant, effectively ensuring he will be remembered. This foreshadows his final confrontation with Gaear, who might not have put him in the old woodchipper if Carl hadn’t insisted on quibbling about the car Jerry initially stole for them to use in the kidnapping. Carl burying the ransom money in a vast, snowy field indicates his ambition to rip his partner off in the same way Jerry had intended to rip off the both of them (as well as Wade) in his “all worked out” plan, but his pettiness instead gets him killed. Even wealthy old Wade, with all his success and money, has unfulfilled tough guy aspirations of his own, as we see him rehearsing his action hero one-liner (“I got your damn money, now where’s my daughter?”) on the way to the botched ransom drop.

The pure goodness of Marge and her kind and always optimistic perspective is summed up in her final monologue to Gaear as he rides, silently as always, in the back of her patrol car: “There’s more to life than a little money, you know. Don’t you know that? And here ya are. And it’s a beautiful day,” she says, as snow comes down heavy enough it is at first impossible to see the other approaching squad cars. “I just don’t understand it.” Jerry has left himself and his family in ruins because of his own malignant ambition, while Margie, her own aspirations untainted by pettiness or greed, congratulates Norm on the relatively small victory of his mallard painting winning a spot on the three-cent stamp. Norm is mildly disgruntled at the fact that these are not the most popular stamps, but Margie wisely reminds him, “Whenever they raise the postage, people need the little stamps,” and after all, it will be just “two more months” until their baby arrives. Like seeing a beautiful day in the midst of a blizzard, it’s all about having a healthy perspective.

As a sad postscript, there is the 2001 story of a Japanese woman, Takako Konishi, who froze to death after traveling from Tokyo to Minnesota in order to try and dig up the suitcase full of money buried by Carl in the movie. That, at least, was the popular story at the time, which became the basis of the 2015 film Kumiko, The Treasure Hunter. The real story is actually even sadder, but like the Coens before them, David and Nathan Zellner took inspiration from reality and then just crafted their own “movie just in the genre of a true story movie,” and the immensely popular Fargo TV series has done the same, and continues to do so even in a “fake news” world where the lines between true stories and fiction have been increasingly blurred. Nearly 25 years later, there has still been no more worthy example for anyone aspiring to make an instant classic than this great American film.