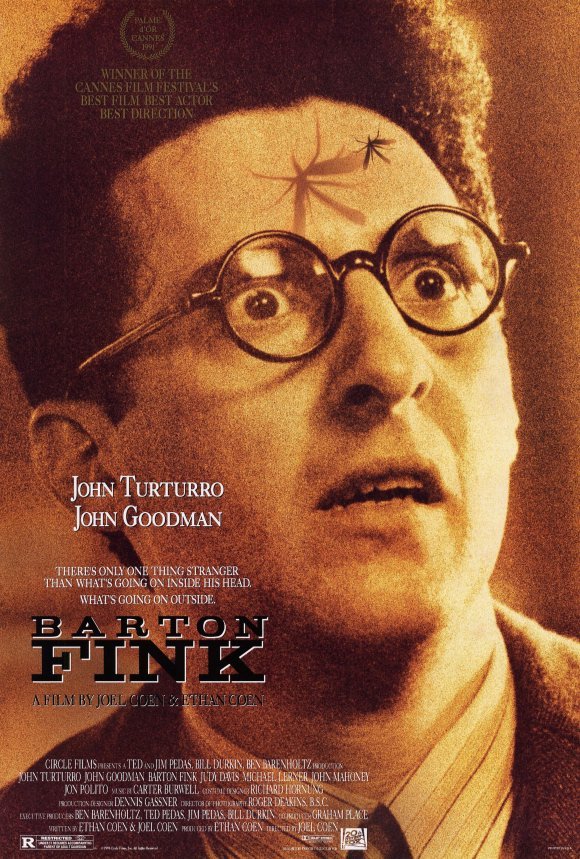 Barton Fink is one of my favorite Coen Brothers films. This assessment is not shared by many, Coen Brothers fans or not. This is easy to understand, as Barton Fink is one of the Coen’s most enigmatic works of art. To this day the Coen Brothers have chosen to not explain the film, and years of speculation have yielded no consensus about the film’s meaning and ending. Coen Bros. detractors seize upon Barton Fink and exclaim, “See? The Coens are just over-educated, pretentious, artsy Jews who really don’t know how to make an interesting film!” Premise rejected.

Barton Fink (John Turturro) is a liberal, Jewish and talented playwright who takes an opportunity to go from New York to Hollywood to write for the movies. Instead of checking into a nice, modern hotel, he opts for the seedy, garish Hotel Earle, a setting where much of this movie transpires. Jack Lipnick (Michael Lerner), an overbearing big shot movie producer, needed a movie script. It was a B movie, a wrestling picture, and Barton was instantly out of his element.

It was late Fall in Los Angeles, but there was a heat wave and as the wallpaper paste melted in his cheap hotel room. Barton Fink was in trouble, paralyzed by writer’s block and unable to get out of the gate to even begin writing his wrestling movie. Barton meets his next door neighbor, Charlie Meadows (John Goodman) who is a jolly, burly insurance salesman. Charlie is also a former wrestler, with many stories to tell, but Barton is so self-absorbed that he literally cannot see the forest for the trees. He just would not listen.

Instead, Barton consults with another writer, the famous and infamous W.P. Mahew (John Mahoney) who is a part time writer and a full-time lush. Barton also meets Audrey (Judy Davis) who is Mahew’s secretary, mistress, wet-nurse…and ghost writer as well. As the pressure mounts, the movie kicks into gear and really gets strange as Fink cannot get out of his own way and encounters much deeper issues than mere writer’s block.

To reveal much more of the plot would involve major spoilers. Barton was desperate and the Producer, his lackey, Lou Breeze (Jon Polito), and attorney Ben Geisler (Tony Shaloub) were about as much help as Blake’s motivational speech in Glengarry Glen Ross. Of the two individuals who could help him, Charlie and Audrey, the first is ignored and the second individual becomes too distracted…or better stated, too detached (I’ve said too much) to help the hapless Barton.

Barton Fink is masterfully done, and to fully appreciate this movie one must not be distracted by its ambiguity or unanswered questions. The acting was phenomenal, and John Turturro has never been better. He portrayed the blocked-up Fink, who, trapped by his own genius, was unable to master the concept of less being more. John Goodman turns in a performance that equaled or bettered his one in The Big Lebowski. The usual stable of Coen Bros. actors turned in excellent performances, and Michael Lerner was nominated for an Academy Award. He wasn’t even the best supporter in my opinion, I mean, really, Tony Shalhoub? “Souse…Souse!...SOUSE!!!” when describing Mayhew. Look up “unhinged, over-the-top, fast-talking Jewish attorney” and you will see a picture of Shalhoub.

Like most Coen movies, the cinematography was more than gorgeous, with the great Roger Deakins showing some of his earlier work. He virtually painted your eyeballs with that hotel decor, an opulence of lavish decay, a lamentation of better times. The Los Angeles late Fall heat was oppressive, but things were about to get a lot hotter.

So, what is really going on with this movie and with the writer, Barton Fink? What is real and what is within “the life of the mind”? Barton is almost immediately distracted after he checks into The Earle, but how much of this is his own personal struggle? Barton struggles with his own liberal philosophy and how to integrate it with the Hollywood reality of big bucks production and the inherent corporate disdain for the “common man”.

See the picture above? Really? Well, maybe not really. Here, at Ruthless we do not deny our philosophy or try to white-out or sugar-coat what we see in movies. Barton’s new-found friend Charlie, immediately identified himself as a common man, and “well-endowed”. Barton’s flamboyant mannerisms were noticed by the producer Lipnick (he called his play “A little fruity”), and later by detectives Mastrionotti (Richard Portnow) and Deutsch (Christopher Murney) who outright accuse him of having a homosexual relationship with Charlie.

I’m sorry, I got a little distracted with the not-too-obvious, but it is the mission of the movie lovers who watch this masterpiece, to track down every clue and hint of this unsolvable puzzle. No one knows what is in the box. No one knows what was real and what was Memorex, and most of all, no one knows what was in “The life of the mind”. What we do know is people like Tarantino and The Coen Brothers love Hollywood and love to make great movies about it. Barton Fink is one of the greatest films about Hollywood ever made.

Seriously, Shirley, this film is so metaphorically rich and filled with symbolism and what-ifs that it should be illegal. As I stated earlier, like with David Lynch and Eraserhead, the Coens have remained totally mum on what they were really up to with Barton Fink. We probably will never know and that is just O.K. by me.