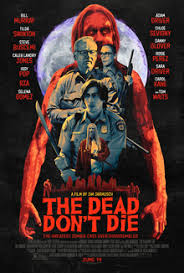 Another lame zombie movie. Watch The Train To Busan instead

“Humor is subjective” is a phrase I forced myself to remember several times throughout legendary independent filmmaker Jim Jarmusch’s latest, The Dead Don’t Die, as several other people in the audience with me reacted audibly and approvingly to jokes I found relentlessly unfunny and lame.

Here are some of the bits that elicited laughter…

Farmer Frank Miller (Steve Buscemi) is introduced in a diner, wearing a bright red baseball cap with white letters in a recognizable font reading “Keep America White Again.” That’s it. That alone got a laugh, of the performative type borne not of true mirth but a desire to let others know you get the joke (or so it seemed to me, at least).

In the same early scene, Farmer Frank complains that his coffee is “too black for me,” at which his neighbor on the diner stools, Hank Thompson (Danny Glover) gives him the side-eye. This got (again, from several people in the audience) the sort of almost wounded laugh generally received by only the most biting satire or social commentary.

Are you laughing yet? If not, you may want to skip this one, as this type of toothless satire and deadpan repetition is about all it has to offer. Officer Ronnie also repeats the phrase “This isn’t going to end well” early and often, reminiscent of O Brother, Where Art Thou?‘s “Damn, we’re in a tight spot,” i.e. a bit that worked better in a much better movie released almost twenty years ago. If you haven’t seen any movies since then, this one just might feel fresh and interesting to you.

It might also help if you’re not actually into horror movies in general, or zombie movies in particular, the latter of which, at least, Jarmusch apparently isn’t, either. He’s stated that he was drawn to the genre’s “obviousness” as a metaphor for the mindlessness of consumer culture, and the movie also has a hint of an environmental message in the idea that the zombie attack was brought about by fracking and the fact that everyone seems perversely nonchalant about the end of the world as it’s happening. George A. Romero, pioneer of the modern zombie genre, was never especially subtle about his sociopolitical themes, either, but here the obviousness is pushed to extremes that make the whole thing very silly, but in a shockingly no-fun sort of way. The whole thing has a strange feeling of trying too hard while simultaneously being incredibly lazy.

This is a movie of cameos instead of characters. RZA of the Wu-Tang Clan shows up briefly to play a driver for a postal service called Wu-PS, a joke at which not even the most die-hard Wu fan (scarred for life, we can’t forget the cuts) could possibly do more than groan. Caleb Landry Jones and Sevigny, for example, have more screen time but are basically only asked to be squirrely and terrified, respectively. Tom Waits has a movie-ending monologue that, coupled with the score by Jarmusch’s band SQURL, would make a nice spoken word track on one of his albums, but only serves here to painfully underline every tired non-point that has already been unsubtly made by the movie. Even national treasure Carol Kane is utterly wasted in a tiny role as one of the first zombies to rise, which is perhaps this misbegotten slog of a movie’s most unforgivable sin.

The ostensible leads don’t fare much better. Devoid of any real personality or chemistry, Driver and Bill Murray instead share an annoyingly postmodern bit, telegraphed early on and later made face-palmingly explicit, in which they know they’re in a Jim Jarmusch movie. This goes absolutely nowhere interesting or unpredictable, much like everything else.

It’s hard not to believe Jarmusch is trolling us, that he intentionally made a painfully obvious, unfunny zombie parody in order to comment in some hip, smarter-than-thou way on the stupidity of this very popular genre. If this is the case, I sincerely hope he and his incredibly talented cast full of people I really like had fun making it, because I can’t imagine a very large audience will enjoy being condescended to so relentlessly.