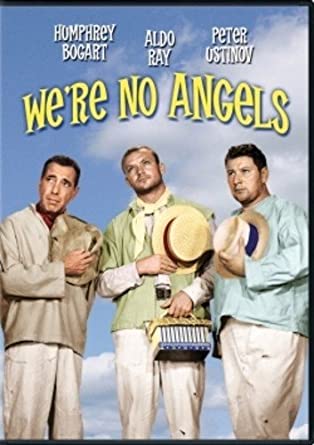 Three escapees from Devil’s Island are master con men, and help out a kind merchant and his family.

Here at Ruthless we love our readers, especially when they give us suggestions about great movies to review. We’re No Angels is a light-hearted and unusual Christmas type movie staring the iconic Humphrey Bogart. O.K., it wasn’t a great movie as such, but considering that the film is 65 years old, it holds up quite well as a quirky Christmas family movie.

The movie begins as 3 convicts have nonchalantly escaped from the prison at Devil’s Island. If you watch the movie, you’ll see what I mean. The 3 convicts are Joseph (Humphrey Bogart), Albert (Aldo Ray) and Jules (Peter Ustinov), and they are hatching a plan to escape from the island as well. The pickings look easy as they stumble into a mercantile store that is operated by the hapless Felix Ducotel (Leo G. Carrol) and his wife Amelie (Joan Bennett). They pose as roof repairmen and soon have the run of the place, as they are masters of larceny and deceit.

The 3 convicts plan to plunder and rob the store, and even kill the Ducotel family, but they soon become attached to them, especially after meeting the innocent and beautiful daughter Isabelle (Gloria Talbott). Felix is no businessman, so the shop is doing poorly. This is bad because Felix’s cousin Andre, the shop’s owner is coming for an end of he year inspection of the place and the books. Andre (Basil Rathbone) is a horrible human being, being about as likeable as Donald Trump. Isabelle is also in love with Paul, Andre’s son, which further complicates matters.

Andre arrives, and more than lives up to his billing as a villain. The 3 convicts then swing into action with plots, schemes, tricks, shenanigans and even snakes to thwart the evil Andre and save the business, and Christmas! Their histrionics are hilarious and dialogue and one-liners flow with the delicious irony of the ever-changing situations.

We’re No Angels is a well-acted and suitable for the entire family Christmas movie. Even for a silly Christmas comedy, the plot is engaging and satisfying, and how can you miss with the great Humphrey Bogart and that supporting cast?

7.0/10.0 With The Goatesian Rating Of Watch This Classic Instead Of Something Like A White Christmas Or A Christmas In Connecticut