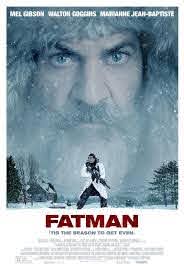 A 12 year old punk hires a hit-man to snuff out Santa. Santa is no amused.

The subversive Christmas movie is nothing new in cinema. Every year, profound wits declare that they and they alone have discovered the shocking truth that Die Hard is, in fact, a Christmas movie. Taking it a bit further, nearly every action movie written by the great Shane Black (Lethal Weapon, The Long Kiss Goodnight, etc) qualifies, as they all have at least one scene set at Christmastime. Other even more highbrow types might point to Eyes Wide Shut or Tangerine as the Christmas movie that makes them better than you. Just lately, and perhaps beginning with the unassailable Bad Santa, the trend has been to subvert the character (or idea) of Mr. Claus himself, making him a hard-drinking, burly tough guy, more hard and muscular than fat and jolly, as seen in the recent Netflix endeavors The Christmas Chronicles and Klaus.

In Fatman we have a Santa (“Chris Cringle,” played by Mel Gibson at his beardiest) who enjoys a strong drink, though perhaps not as much as Billy Bob Thornton’s Willie Soke in Bad Santa, and who is gruffly resentful of being perceived as fat and jolly, ala Kurt Russell’s turn in The Christmas Chronicles. The movie itself leans more toward the Die Hard end of the spectrum, at least in terms of action and violent content. Its quality is closer to that of The Christmas Chronicles; it’s enjoyable, largely because of the talent involved in the cast, but unlikely to stand the test of time as one of the true seasonal classics.

In addition to Gibson as Chris, there is also Secrets & Lies‘ Marianne Jean-Baptiste as Ruth, our Mrs. Cringle, and Good Boys‘ Chance Hurstfield as young Donald Trump, er, I mean Billy Welan, a spoiled rich kid who crosses over into genuine evil by hiring an assassin to intimidate a classmate who had the audacity to beat him in the Science Fair, and later to take down Chris himself after he, Billy, receives a lump of coal for Christmas.

Walton Goggins is the ace up the movie’s sleeve as this assassin, credited only as “Skinny Man,” who also has a score to settle with Chris over a disappointing gift from his own childhood. At one point he gets off this beauty of a one-liner: “You remind me of my mother. She was a bad listener and never knew when to shut the fuck up.” The Skinny Man has no more allegiance to Billy than he presumably reserves for any of his clients beyond the contract he’s been given (he has Billy in his phone under the name “Little Shit”), but he has already gone to great lengths over the years to hunt down the elusive Cringle, and this latest assignment gets him closer than ever.

Goggins is, as usual, a joy to watch, and his performance elevates what could have otherwise been a rather mediocre movie, albeit one with a pretty fun central premise. Until the Skinny Man and Chris inevitably meet, the scenes involving Goggins are easily the most compelling ones, and their climactic confrontation is, of course, the expected high point of the movie.

A subplot involving Chris and Ruth deciding whether to take a contract from the U.S. military is also interesting, but ultimately underdeveloped, though the culture clash between soldiers and elves is amusing. Gibson is agreeably gruff as Chris Cringle, and has decent chemistry with both Jean-Baptiste and Goggins, but the movie’s violent action-comedy take on Santa is simultaneously too adult to be a family favorite and just not quite crazy or funny enough to be the next big alternative Christmas movie.