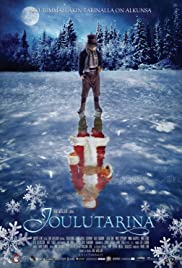 A Finnish tale of how Santa Claus came into being

This is not A Christmas Story, the greatest Christmas Movie ever make, but a charming, unique and very watchable Finnish version of how Santa Claus came into being. Like the Netflix classic Klaus, Christmas Story is not another cheesy and lame “save Christmas” film, but one that creates Christmas, with absolutely no mention of the baby Jesus.

The movie starts on a somber note as Nickolas is orphaned when his parents and baby sister are lost through the ice. This is a very poor and small village and the villagers struggled with a solution of how to care for the orphan. They decided to share the burden, so once a year, at Christmas, Nickolas went to a new home in the village. As years passed, the fish weren’t biting and no one was willing or able to take in Nickolas. As a last resort, the village curmudgeon and wood-worker Iisakka agreed to take him in and use him as a indentured servant at his wood shop.

Even though Iisakka was a gruff taskmaster, Nickolas was delighted to be in this environment where he could pursue his hobby of carving wooden toys. He had started a tradition of leaving anonymous gifts on Christmas Eve for the families that had taken him in. I guess you can see where this is going, right? Anyway, as Nickolas grew older, Iisakka grew fond of him and we found out the real reason for his bitter attitude. This story is very similar to that of the animated movie Klaus.

When Iisakka was no longer there, the adult Nickolas assumed more and more of the role of Good St. Nick, but not in the traditional sense that we are familiar with in the American myth. There were a few plot turns and twists, but the story line remained very satisfying and heart-warming.

As you can imagine from looking at the stills in this review, the cinematography was stunning. There was no need for any fake snow at this Scandinavian location. The fishing village looked as charming and authentic as it could be, a true winter wonderland. Santa’s workshop was cozy and busy, with not an elf in sight! The makers of this movie really did a great job with a minimal cast, and not a special effect to be found. Even the reindeer were real.

7.5/10.0 With The Goatesian Rating Of Highly Recommended For Christmas Movie Lovers