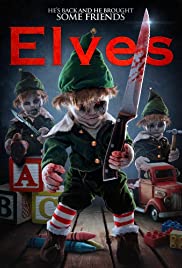 Ancient Elves locked in a chest only come out at Christmas.

I’ve come to an unassailable generalization. Every Christmas movie with “Elf or Elves” in the title is going to be horrible and without redemption, campy or otherwise. The opening “teaser” (more like snoozer) scene lasted 6 minutes and consisted of two young boys sitting in a dark room with that awful piano, bang-bang one chord music playing. Oh, my, something terrible is coming. Yeah, the rest of the movie.

Now we cut to a group of young adults, sitting on folding chairs in a graffiti-filled alley. In the middle of this group of dodos is a chest. The Elf has spoken with his notes. They must all commit atrocities when instructed, or they are put on the naughty list. Oh, where have I seen something like this before? It was in that awful movie that I actually reviewed, Truth Or Dare, so I’m not going to waste much time with this review.

The acting was atrocious and any attempt at continuity laughable. The movie went from pitch dark to glaring sunlight with no attempt to competently bridge the scene. Also, at Christmastime, we have a ML Baseball game blaring on the TV at the bar. We also have this stupid wooden elf that looks like it was carved by a nursing home resident with Parkinson’s. This elf leaves notes for the Truth or Darer’s to kill people. Of course, they do this bidding. No one wants on the naughty list.

Here is an example of some of the brilliant dialogue. “If you see the Elf, Get Out!…..We are coming to where you are, just Don’t Move!” Of course, Monica, or is it Casi, dies horribly minutes later. We then cut to what’s left of this pathetic crew sitting around a pentagram with an elf doll and knives. One of the nitwits sticks a meat fork in her own neck while the music blares, “We Wish You A Merry Christmas”.

They then all sit around and try to determine who is next on the “Naughty List”. Wash, Rinse, Repeat. Oh, and those stupid, stupid, elf-grin faces that show up randomly on the possessed.