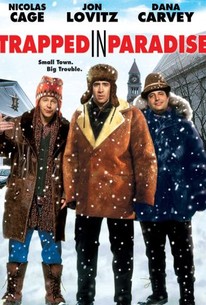 Trapped in Paradise is far from the most beloved entry in the great Christmas movie pantheon, as evidenced by the fact that it has not yet been covered on this site. Its own cast reportedly hated working on it so much that they took to calling it Trapped in Bullshit, though the only source I can find for this is Jon Lovitz, who famously plays compulsive or pathological liars in both this movie and several recurring sketches from his time on Saturday Night Live. Lovitz (whose account I don’t actually doubt, I was just funnin’) claims that writer-director George Gallo was bizarrely negligent of his directorial duties, leaving Nicolas Cage to basically direct at least one scene and telling everyone repeatedly to just “do whatever you want.” Despite all this, Trapped in Paradise remains one of my favorite Christmas movies, and one that I’ve revisited roughly every other year since seeing it in the theater in 1994.

More than anything, what saves it is the cast. Lovitz and co-star Dana Carvey had worked together for years on SNL and have great chemistry as the goofy but heist-minded Firpo brothers. Alvin is a kleptomaniac Carvey loosely modeled after a young Mickey Rourke, while Dave (Lovitz) specializes in lies and manipulation. Just released on parole, they are placed in the custody of their brother Bill (Cage), a restaurant manager in New York City. Bill knows better than to believe their story about wanting to travel to Paradise, Pennsylvania, to do a favor for a prison friend of theirs, but he is ultimately duped by circumstance and the combined talents of Alvin and Dave into making the road trip. Of course, the real purpose of the more criminalistic Firpo brothers’ plans is to rob the town bank, which has such lax security and such a great potential reward ($275,000) that even the more straight-and-narrow Bill can’t resist the urge to knock it over.

Gallo made his name as the screenwriter of Wise Guys and Midnight Run, both crime comedies involving stolen money, the mob, and law enforcement, just like this one. The guy really made a niche for himself. He was also the original screenwriter of Bad Boys, before it was heavily re-written and re-cast from the original stars producers Jerry Bruckheimer and Don Simpson had in mind, who were none other than Dana Carvey and Jon Lovitz! Seriously (again, according to Lovitz), the roles ultimately played by Will Smith and Martin Lawrence in the 1995 action-comedy hit Bad Boys were originally meant to be played by Dana Carvey and Jon Lovitz, and I cannot begin to tell you how badly I want to see that movie, rewritten as it was for Smith and Lawrence, but starring the goddamn Firpo brothers. I have to imagine it would be one of the best/worst movies I could ever hope to cherish.

The supporting cast is full of great character actors like Donald Moffat, Angela Paton, John Ashton, and Richard Jenkins. Jenkins is especially enjoyable as the hilariously frustrated FBI agent called in at great personal inconvenience to this wacky podunk town, where a blizzard has made escape impossible for both himself and the Firpoes, who keep implausibly avoiding suspicion for the bank robbery despite having the rather distinct voices and mannerisms of Nicolas Cage, Jon Lovitz, and Dana Carvey, all doing heightened, memorable characters. Cage in particular is in peak form, just a bit more than a year away from winning his Oscar for Leaving Las Vegas, but this is much more the “bad” Nicolas Cage the internet has come to love, with his frequent shouting, off-and-on New York accent, and strange, angry inflections. Even more than the Christmas movie crowd, it’s surprising that the Cult of Cage hasn’t embraced this movie more fully.

Ultimately, as my brother (who also grew up watching it with me) pointed out recently, Bill’s story does follow the familiar beats of your average Lifetime or Hallmark-style Christmas romance, as he has his cold big-city heart melted by a small-town girl (Madchen Amick, from Twin Peaks, Sleepwalkers, and several of my fondest dreams), as well as the small town itself, a place where everyone is so nice they’ll treat you like family even after you rob them at gunpoint. Sure, it’s corny, and maybe it’s more than a little nostalgia on my part clouding my judgment, but I think this is a damn funny movie in the proper spirit of the season. You could certainly do a lot worse, and every year’s crop of new Christmas movies has at least a few that will prove that.