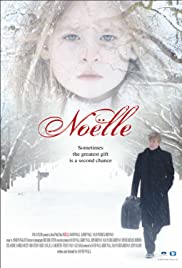 A priest comes to a small New England village to shut down a dying parrish. What is thought to be a routine sacking is anything but.

It is no secret that faith-based movies have taken their review lumps from both believers and non-believers alike. The harsh criticism heaped upon this genre of movie has been well deserved, and I have been a joyful participant in this scrutiny. Faith-based Christmas movies are especially vulnerable to criticism for poor artistic presentation and falling to the stereotypical Christmas tropes. These plots are usually saving Christmas or overly hyping the ridiculous mythology of the virgin birth and crucified savior, wrapped in the inevitable sugar-coating of Santa Claus.

Noelle is a Christmas movie that on the surface looked like a cornucopia of bounty to be relentlessly and unmercifully mocked. An added bonus is that it is a film about a dying Catholic parish that is about to be sacked because of declining interest and run by a drunken priest who is diverting offerings. Oh, boy, my cup runneth over with this one. Or does it?

Mrs. Worthington’s Party is an indie movie written, directed by and starred in by David Wall, who is a undeniable dead-ringer for a young Robert Redford. Also starring in this film is his wife Kerry Wall, who plays Marjorie Worthington. They make a gorgeous couple, but in this movie they are often adversaries, he being a priest, and she being a non-believer. As I mentioned, Father Jonathan Keene has come to shut down the parish that is run by a former seminary mate, Father Simeon Joyce, who loves his flock, but the church has lost membership, money and momentum.

I am not going to go deeply into the plot as that would involve a lot of spoilers, and this movie is just too good to spoil. What? I will go ahead and state that this is one of the best faith-based movies I have ever seen, especially for a Christmas movie. The setting and cinematography were quite good as it was set in a small, Cape Cod village at Christmastime. For a low budget film, the acting and writing were excellent and the flaws of the Catholic Church were addressed while still walking the tight-rope of the point of view of the believers. I don’t think I’ve ever seen it done better.

The character developing in this indie film was pretty amazing. Father Keene is a stern and no-nonsense representative of The Church, who doesn’t like anything he sees at this under-performing Parrish. As you might guess, things are not quite as they seem with either Father Keene, the local priest, or the parishioners. The plot turns and twists as the movie progresses are very intriguing, especially for a faith-based Christmas film. There was humor, violence, heartbreak, reveals, forgiveness and redemption, without a trace of predictable Christmas cheesiness.

What really surprised me were a lot of the reviews that bashed this film for being poorly acted and anti-Catholic. I could not disagree more. This movie showed the priests, parishioners and the non-believers to be human beings. They had real life issues and the back stories of the characters were slowly and competently revealed. Noelle is both heart-warming and thought provoking and never once did the film lose its momentum.

This great film is available on Prime Video and several other streaming services. I was pleasantly shocked as to how good this film was. The ending was quite surprising and fulfilling. Noelle is the best presentation of a faith-based movie that I have ever seen, and I recommend it to believers and non-believers alike.

8.0/10.0 With the Goatesians Rating of a must-watch faith-based Christmas Movie.