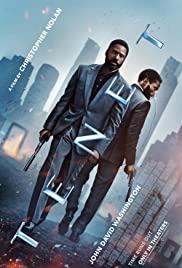 The word “tenet” must save the world

As has become customary of late, the sound mixing in Nolan’s much anticipated, much delayed film was a topic of contention, and though intentional, it seriously interfered with desired immersion. Decrypting whose desire it was optimized for—the audience’s or Nolan’s—just may yield the most succinct review possible. I could go one further and declare it the best movie I have seen at the theater all [2020] year, which isn’t much during a pandemic. At best, audiences would miss crucial dialog because of the audio design. At worst, the illusion of intelligent science is shattered and compromised. And for a title anointed as the savior of cinema houses post-lockdown, the irony of holding off on the experience until available on demand, with subtitles, as the best course of action is glaring, gargantuan and grave. Caveat emptor seems apt for film lovers who prefer to go in cold, considering the current climate, a daunting runtime and of course subject matter.

Neither Nolan’s reputation nor his credibility should be taking a hit anytime soon despite a retread inside similar territory and of familiar tropes. On the surface, the marquee maverick’s latest splits its time between a labyrinthine puzzle (his most daring to date) and a rather simple, digestible veneer of espionage, both anchored by the premise of time inversion as regards time traveling in reverse. Beginning in media res, inside an Ukrainian opera house, with a carefully coordinated extraction op well underway, it resumes in a globe-spanning scavenger hunt for a nameless protagonist (John David Washington) to embark on for its remainder. Intrigue and audience interest are sustained by that abrupt commencement act, though only to a point, as dense exposition would follow as the next change-up. Enter, the first Nolan surrogate.

The scientist who discovered this new phenomenon—now a technology used to plot attacks across time—explains everything, and the gist of Nolan’s new science project is object entropy being a product of a two-way process. Changes in the make-up of an object’s thermodynamic properties run one way, leading to a gradual or sudden loss of energy over time or due to use and wear. If an object is sent back in time (i.e. flowing back into time not just popping up ten hours, days or months in the past), its effects could be amplified since its entropy is reversed. Think of it as carbon dating for anything capable of conducting heat. I suppose there is current forensic application for bullets found in a crime scene. And where sciences sees carbon dating, Nolan is merely seeing the sweeping possibilities beyond because fuck Newton, right?

For subjects, that reverse process is straightforward provided they enter temporal turnstiles that eject them out of an adjacent set in a new state at odds with their surroundings. Heat transfer and respiratory intake run in reverse now, meaning they should still be breathing in oxygen while their lungs are expecting carbon dioxide—except they’re breathing in carbon dioxide despite no atmospheric changes to asphyxiate a non-inverted subject standing across the room. Naturally, there was no mention of nutritional intake or knowledge flow as the absurdity of consuming feces, defecating nutrients and growing dumber with the passage of time would expose the limits of credibility. For objects like bullets, they have to be fired from the other plane, just past the turnstile. So far, so good except it now is objects, subjects and history itself that can be subjected to inversion, as well.

The actions gets underway, and the stakes are nothing less than oblivion. Whoever gets their hands on an artifact—called the Algorithm made up of nine pieces can unleash an apocalypse like no other, if they so wished. As anticipated, we have just that scenario and villainous impetus in Sator (Kenneth Branagh), who is in possession of all parts but one and hence the opening ambush. A billionaire driven more by a God complex than accumulating wealth. An uncouth third-world wife beater (a sombre, underdeveloped Elizabeth Debicki) somehow impervious to and unencumbered by the usual depravity of the upper stratum he occupies.

And to stop him, the protagonist is aided more by the diffuse oratory of veteran Tenet agent Neil (Robert Pattinson) than any tactical nous. “Don’t try to understand it. Feel it” would have served better as a promotional tagline aside from a directive blurted by one of several characters posing more as authorial mouthpieces than their own unidimensional selves. Rote memory is the method of ingestion and preservation of the film’s exposition for an audience now left with one solitary surrogate character amid a slew of Nolans to explain shit you won’t entirely hear. There’s ‘expository dumps’ and then there’s ‘streams of diarrhea, incessant and profuse, sprayed with a uniform consistency throughout.’

Hoyte van Hoytema’s cinematography brings its A-game capturing forward movements inducing reverse displacement in a nearby medium; waves splash away from a ship’s hull, ripples close up on a pooling puddle, smoke billows back into exhaust pipes, while characters and vehicles move in the direction opposite to the burst of matter they impact. Impressive feats to capture on camera to go along with disparate locales, each awash in their unique splendor. Tense action sequences dot this sprawling panorama, serving no purpose other than to interject conflict as a convenient bookmark and plot movement device, and also showcasing Nolan’s prowess for staging practical effects. There is a fist fight, a car chase, and a jumbo jet rammed into a building that are witnessed from both time projections featuring forward- and backward-moving characters. Belligerents, comrades and clones of the main cast twinned by the temporal entropy. Except the viewer is teased by that third hypothesis—time inverting onto itself—as a doomsday scenario to avert.

Underneath, there are grand ideas about a new future, one still grim as most versions regurgitated by sci-fis peddling in existential threats are apt to exist in, but man’s impulse to seek conflict rages on. Our warring instinct over sustenance is bandied about, as are the abstractions of time as a continuum, and not in any detail beyond a cursory mention. One motive broadly cited is future generations possibly using the Algorithm to exact revenge on a predecessor that left them with a depleted planet. Talk about the main event being a digression.

I was left with two theories and an underwhelming reaction, all sure to be muted and debunked by viewers who hunkered down to deliberate every sequence, I imagine, but I’ll put them forward anyway. It felt like the Tenet team was doomed to repeat their excursions across time to prevent annihilation irrespective of the outcome filmed. A watchful eye never sleeps sort of scenario… maybe that grim future is already here as a current reality. And I kept thinking of the infinite versions of themselves that that’ll produce which went counter to the overpopulation dilemma that necessitates a hypothesized pre-emptive attack on their forbearers. This is all sounds like rationalizing the inevitable human loss in the war on terror is a hidden subtext—that killing is justified when serving the greater good.

One thinks of spectacle when the name Nolan is brought up, and late-stage Nolan has indeed proven increasingly ambitious in scope, in tandem with a growing stature, yet again it is the peripheral that takes center stage in his films. It is indeed curious, if not downright heretical, to label the only working director to command upwards of $200 million in budget the Dan Brown of his niche though in fairness the two intersect in a painstaking organization of their gimmick along a unified thematic, symbolic or abstract concept and Nolan did get my ass in a theater seat after all. I have little reason to doubt the plot is air-tight and error-free, knowing Nolan’s tendency to exalt structural arrangements above a purely dramatic pull should put him on course for eventual narrative perfection, but having the wherewithal for another go-around to see if it’ll click is not for everyone. Taking into consideration his sci-fi films and his thematic obsessions, one can no longer shake the feeling that these films were helmed by a failed theorist that next landed on his feet in Hollywood. Or that indeed there is a physicist (or worse, a county fair magician) successfully moonlighting in the director’s chair. That Nolan was interested an high-concept idea about time, then tried to fit a story around its logic, again. That maybe he is moving the dials on intelligibility and technique in opposite ways for the hell of it, now.