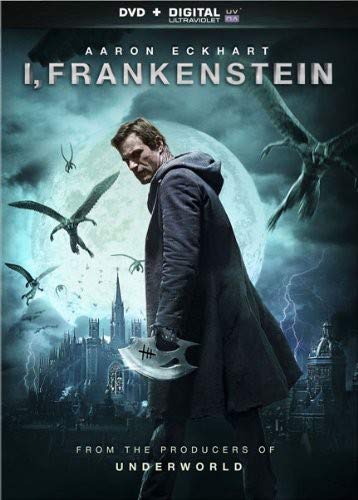 The longer you watch I, Frankenstein, the harder it is to believe that it is an actual theatrical feature and not just a bad TV movie made for the Syfy channel. Despite big-name, reliably good actors like Aaron Eckhart, Bill Nighy, and Miranda Otto, and special effects that, at their best, at least look like a really good video game, the entire project is bogged down by the bizarre combination of extreme silliness and relentless self-seriousness. Somehow, in making a movie in which Frankenstein’s monster (Eckhart) is reimagined as a modern-day superhero fighting against a legion of demons that want the secret to his immortality, no one managed to have any fun. The audience is certainly no exception.

Alfred Hitchcock is credited with popularizing the term “MacGuffin,” a plot device that is crucial to the protagonist(s) and/or antagonist(s) of a story, but which has no intrinsic relevance to the audience. The titular bird sculpture in The Maltese Falcon is the perfect example; we, the audience, don’t care one way or the other about an ancient statue of a bird of prey, and it ends up being a phony replica anyway (spoiler for an 80-year-old movie), but because the likes of Humphrey Bogart and Peter Lorre are pursuing it, we become interested.

I, Frankenstein is a movie that focuses on the point of obsession on every MacGuffin it can find, and it expects the audience to give a shit. It expects this so blindly that it never bothers to give us anything else to care about instead. It is a generic pastiche of better movies like The Matrix and Dark City, endlessly fascinated by “cool” character names like Naberius (Nighy) and Leonore (Otto), but it seems to have little interest in them as actual characters. This is fitting, since they are not really characters at all so much as video game avatars.

The guy to blame for all this is writer and actor Kevin Grevioux, who was also behind the similarly dreadful Underworld franchise. Grevioux is a giant, intimidating man on the outside, but on the inside he is the most insufferable, sniveling nerd who has ever lived, the kind of geek that makes my jock blood boil. If not for the fact that he looks like he could crush me into powder, I would be tempted to find him and give him a wedgie.

In all seriousness, though, it is somewhat baffling to me that someone like Grevioux, who clearly has a deep, abiding love for the fantasy genre, would consistently remove all but the most tedious aspects of that genre. Everyone speaks like they are auditioning for the worst Shakespeare production ever, and the dialogue is all stupid names and overly complicated demon clan back-stories. This is a movie for the likes of Dwight Schrute, the self-described (at least by the actor who portrayed him, Rainn Wilson) “fascist nerd” from The Office. All others are well advised to steer clear.