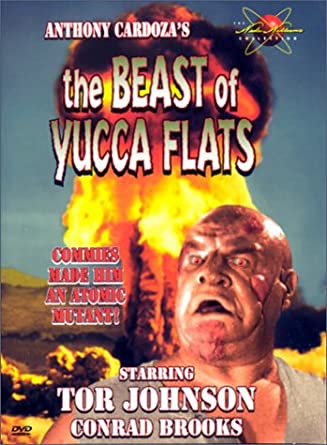 The Beast Of Yucca Flats

Flag on the moon. How did it get there?

Tor Johnson
A bunch of other unknowns who are now dead

The Beast Of Yucca Flats is a mind-melting mess of a horror movie created by the one and only Coleman Francis. This movie is only 54 minutes long, but it seems to drag on for hours. Where to begin? How about the opening scene where a topless babe gets nonchalantly choked out (by the beast, I guess) in a scene that has absolutely nothing to do with the movie. This masterpiece evidently never made it to the theaters, so the tit flash was obviously “click-bait” for the second feature at the Drive-In.

Here is what passes for a plot. An unlikely Russian Scientist defecting to the U.S. (Tor Johnson-pro wrestler!) strays too close to a nuclear test site while being chased by a bumbling crew of KGB-men in a 1961 Plymouth Valiant. The nuclear blast turns him into a “beast”, a talcum powder covered moron who stumbles around in slow-motion grunting like a constipated turtle, and”terrorizing” the countryside.

In one of the most unintentionally hilarious scenes in the movie, Tor somehow snuck up on a hapless vacationing couple, who was having car trouble at the side of the road. The hilarity of the homely woman, just standing there holding her purse while Tor chokes her has to be seen to be believed. This had to be the most boring death in the history of cinema, but it gets much worse.

There was no dialogue when this movie was made. Coleman Francis voice-overed the entire movie after it was shot with clever lines like:

None of this dialogue was remotely related to the movie, which consisted of 45 minutes of Tor stumbling around at .25 mph chasing two boys who could have outrun him even if they had 4 broken legs. In the end, Tor is killed by two random law officers who shot at everything that moved, even unsuspecting tourists on a vacation. An unscheduled curious rabbit ambles on the scene and Tor caresses’ it as he dies. No out-takes in Coleman Francis films, the rabbit stays.

Any random group of teen-agers at suburban mall’s Food Court could have made a more sensible film than The Beast of Yucca Flats. It is included in the Amazon DVD pack of 50 horror movies, so run, don’t walk to your computer or iPhone and order now.

This is the worst movie ever made.