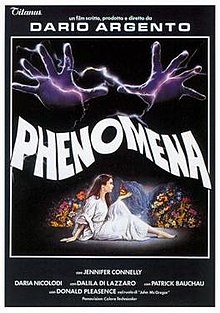 A young girl has the ability to communicate with bugs

WARNING: This film isn’t quite as hard core as a Fulci film, but it does definitely go there, both in terms of gore, ugly mutilation, and decomposition. If you can’t stand maggots you may very well want to skip that particular Argento film.

Fair value of Phenomena: $2.00. Full of rich imagery and strong acting, this film nevertheless suffers from an over-stuffed, twist-heavy plot that detracts from the suspense.

The Swiss Transylvania? Phenomena lifts a lot of it’s opening premise from Suspiria: young weird girl is the new girl at a private school in central Europe where there are murders afoot. But here is where it diverges: other than Jennifer Corvino (Jennifer Connelly, in her acting debut), we don’t get enough time with any of the students or teachers to care about them. Phenomena’s pre-occupied with other things. Namely:

A bug’s life. Jennifer has an unusual talent- the ability to speak with and control the actions of insects. This is a fantastic horror movie premise in and of itself. But then, things start to pile up. There’s a crippled professor of entomology (Donald Pleasence), who’s a forensics consultant, who serves as a mentor to Jennifer. And he’s got a helper chimpanzee.

And then there’s the idea of this haunting witch wind. And Jennifer’s somnambulism. And an asylum for the criminally insane. And then. And then.

It’s a bit too much, like an M. Night Shyamalan film. Phenomena begins to sink down into the swamp of too many weird sub-plots and red herrings.

Lots of Concept, little execution. Less would have been more. You could easily make a Carrie style movie about an outcast who has the ability to command insects. But this is clearly a film where the budget was insufficient to match the vision of what the story could have included.

That being said, it’s a beautiful film to watch, with many wonderfully gothic shots. The leads are both great in their parts.

A Giallo Also-Was: This is one of those films in which I perceive the shadow of a better film cast from the light of an adequate film. They should have done a remake of Phenomena, not Suspiria. This is the movie that would have benefited from modern special effects. Alas.