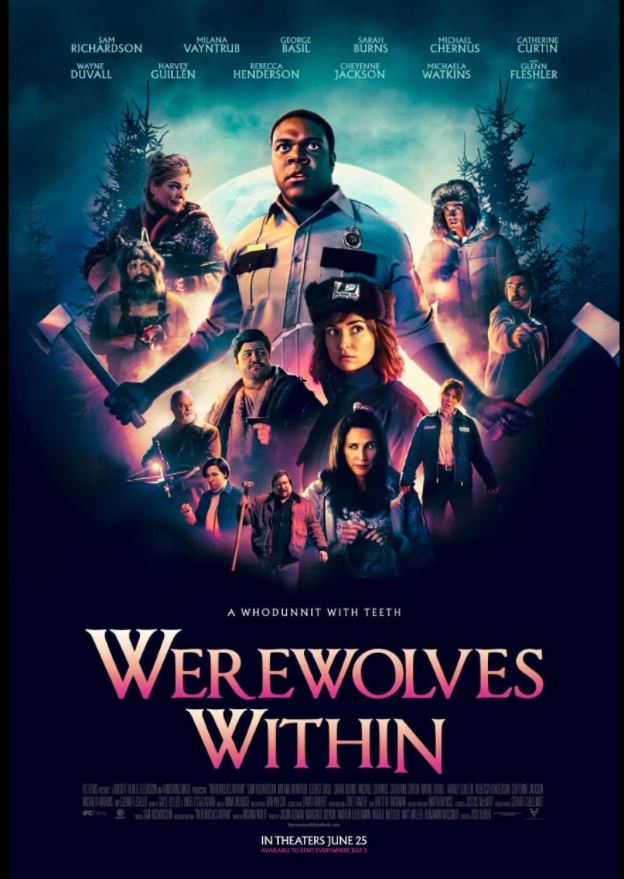 Werewolf creature terrorizes a town during a blinding snowstorm

1 Hr 37 minutes, R for hands getting chewed off.

Fair Value of Werewolves Within: -$4.00. “I feel like I’m trapped in a bad dinner theater murder mystery, and they’re not letting me leave.”- this quote, uttered by one of the characters, completely embodies the experience of this film.

From the Uwe Boll School of Film-making: The first thing you should know is that this film was produced by Ubisoft. That’s a European video game studio, not a film studio. They same people who brought you Assassin’s Creed, which I honestly had forgotten even was a film despite seeing it and reviewing it.

Anyways, this tells us that the real end of this film was not box office so much as it was using Hollywood Accounting and EU art production rules to sequestrate a large amount of money from German tax collectors. Second, this is the second film of director Josh Ruben, and the first film script by Mishna Wolff. And honestly, I’m fine if I never hear of either of those people again.

TL, DR: Somebody took notes on the shitty game of ‘werewolf’ that you played with your friends in college and decided that things needed to be shriller and dumber.

More Summary: This film is supposed to be depicting events in Vermont, but everybody talks like Angelinos. And they don’t shut up! And none of them have anything witty to say! Here’s a writing tip, ‘Wolff’: try having conversational pauses. They exist in actual human conversations. Also, when you have every character interrupting every other line by every other character, it’s not funny, it’s incoherent and confusing as hell.

We have a passel of one-dimensional characters, or caricatures really, that are both introduced and dispatched with the disengaged speed and tedium of a Tyco chicken processing plant. There’s a flaming gay couple, two reductive rednecks, a rightwing businessman, a subplot involve a gas pipeline. There’s no thought or time really given to establishing character dynamics.

All of which is a pity, because there’s a strong comedic caste who are trying to life this film into being watchable. I thought the new ranger (Sam Richardson), the chirpy post-woman (Milana Vayntrub), and Harvey Guillen (one half of the gay couple) were all trying to find ways of bringing levity into a dead-meat script. They deserve better projects than this affair.

This film delivers on neither tension, nor comedy, nor gore. It’s more comparable to being stuck at a really annoying greasy spoon filled with people that you hate.

Who Will Like This Film? Really feels like a rhetorical, rather than an actual question, this time around. It’s like the version of Clue that has fetal alcohol syndromeâ¦ so masochistic connoisseurs of whodunnits who want to see really bad expressions of the genre?

Who Won’t Like This Film? I wasn’t asking for much with my first return to movie theaters since the apocalypse. Just a little matinee on a hot summer day. But you know what? When something is advertised as ‘werewolves within’, I EXPECT SOME FRICKING WEREWOLVES. PLURAL! Not ‘a’ werewolf, not a singular instance, but MULTIPLE WEREWOLVES. False advertising!

Weakass Werewolves: Seriously, what was with that weak Teen Wolf CGI? I think this movie might just have had the weakest transformation and werewolf effects that I’ve ever seen. And I consider myself a werewolf movie afficionado, and this is a low. It’s something out of the worst of the 90s. You’d think a video game studio could manage something better.

There’s a cursory dive into world werewolf lore, which is almost interesting. And the idea of a werewolf using wits and guile over brawn is also an interesting concept. But for me to care, there’d have to be a character to care about. And Werewolves Within does not have an amusing figure in it.