Wake In Fright: a.k.a. Outback 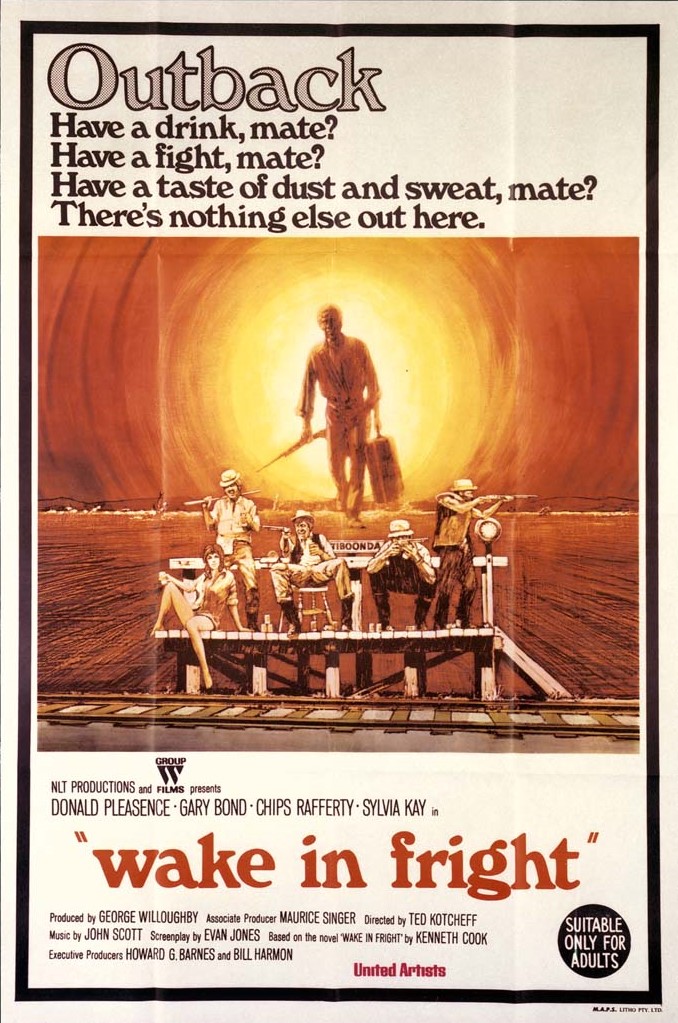 It’s a term bandied around by Nancy-boy progressives designed to make pumped-up, no-nonsense guys think twice about their actions. Bollocks, I say. What’s wrong with piling into a battered Ford with your mullet-headed mates and screeching round corners at breakneck speed while yelling abuse at passersby? Are you seriously saying I don’t have the right to neck twelve pints and politely inform the barmaid to get her tits out before staggering off to the nearest Indian restaurant and calling every waiter there Gunga Din? What’s wrong with whipping out a straight razor and indulging in a bit of gang warfare?

Well, these days, apparently quite a lot. It’s just not fair and honestly, I miss all that old school stuff when men could slip on a spotted loincloth, beat their chests and wrestle a crocodile without being ridiculed as their bruised, cowed women toiled at home over a hot stove.

So, if like me, you get a hankering for the way things used to be then let me tell you there’s no better movie to slap on than Ted Kotcheff’s 1971 masterpiece, Wake in Fright. Bloody hell, it really is the business, a pitch perfect depiction of misogyny, machismo, sweat, looming violence, rampant animal cruelty, liver abuse, wanton destruction and gun worship, all underpinned by an increasingly obvious homoeroticism. In short, it’s a movie that will instantly regrow the hairs on your chest after your nagging missus made you shave them off cos she likes the metrosexual look.

Anyway, meet our hero. John Grant is a miserable teacher eking out an existence in a Godforsaken ‘town’ in the middle of Oz. The shithole he’s ended up in is masterfully established in one of the great opening shots of cinema, a 360-degree sweep that shows nothing but his tiny schoolhouse and a brown, dead, almost featureless land. There’s little doubt this guy has pretty much been marooned on the moon.

Grant, of course, hasn’t chosen to work there or stay at his rundown hotel. In fact, he’s the victim of a cruel governmental set-up that forces new teachers to ply their trade in such chronically understaffed places until they pay off a $1000 bond. Quite clearly, every day’s an ordeal for Grant. He chafes against his environment as his hairstyle, clothes, accent, fondness for books and ability to use three-syllable words all mark him out as different. Hell, even his complexion seems wrong. He’s only holding onto his sanity by the prospect of an imminent six-week Christmas break that will enable him to return to Sydney and blissfully frolic in the surf with his red-bikini hotty girlfriend. And once that bell rings to announce school’s out, all he has to do is get there, a straightforward journey that involves catching the train to Bundanyabba (The Yabba) and then an onward flight to big city civilization…

It’s in the Yabba where his descent into madness begins. Grant doesn’t help himself by stepping into a pub and obviously viewing the natives as uneducated buffoons with their persistent refrain, “C’mon have a drink, mate”. He’s then taken under wing by a paunchy, passive-aggressive cop who effortlessly introduces him to the twin pitfalls of rapid drinking and Two-up, a gambling game that involves betting on the toss of two pennies. Grant watches the betting men, locals he sees as a veritable motley crew of inbreds, wasters and losers, and decides Two-up is nothing more than a “nice, simple-minded game”. And so he puts down his first bet…

It’s no surprise he gets his come-uppance and is forced to rely on the charity of people he regards as fundamentally inferior. What is surprising is the movie’s refusal to pull any punches as Grant stumbles around the Yabba in an alcoholic, increasingly belligerent haze. Suddenly there’s no escaping the glaring sunlight, dust clouds, droning flies, bullet-ridden road signs, the bare chests and sweat-stained shirts, terrible table manners, the belching and puking, the brain-dead conversations, the relentless urge to bet on anything, the arm wrestling and stories of injuries sustained in fights, the contempt for women, the fridges that seemingly have no other function than to store beer, and mates always urging you to drink more and drink faster.

“What’s the matter with you people?” he cries out at one point. The nearest he gets to an answer is the town’s disgraced alcoholic ex-doctor telling him that all the little devils are proud of Hell. Meanwhile, we keep getting glimpses of Grant’s underlying bestial nature starting to surface. Less than a couple of days later he has well and truly succumbed to the old adage When in Rome as he stares aghast at a bloodstained knife after slaughtering some of the local wildlife. “Now yer learning!” one of his new mates crows.

Directed by a Canadian, Wake in Fright would probably be condemned as racist if it were made today, such is its withering depiction of the Outback Aussie male. Then again, it’s a basic truth that it often takes an outsider to show people how things really are. Indeed, half a century after Kotcheff put together this enthralling vision of rural dysfunction, many city-dwelling Australians will tell you Outback life hasn’t changed that much whenever they muster the courage to venture inland.

Plus, I guarantee it’s the only movie in which you’ll get to see a hungry Donald Pleasence cut the nuts off a kangaroo.

Dave Franklin has written many novels set in Australia, none of which are as good as Kenneth Cook’s utterly riveting 1961 source novel of the same name. Still, if you fancy a frequently tactless read about blokey shenanigans check out Dave’s work on Barnes & Noble, Apple, Google Play, and Amazon.